After Andrew’s heart transplant: “I am a man with a deep appreciation for the blessings God has provided me” 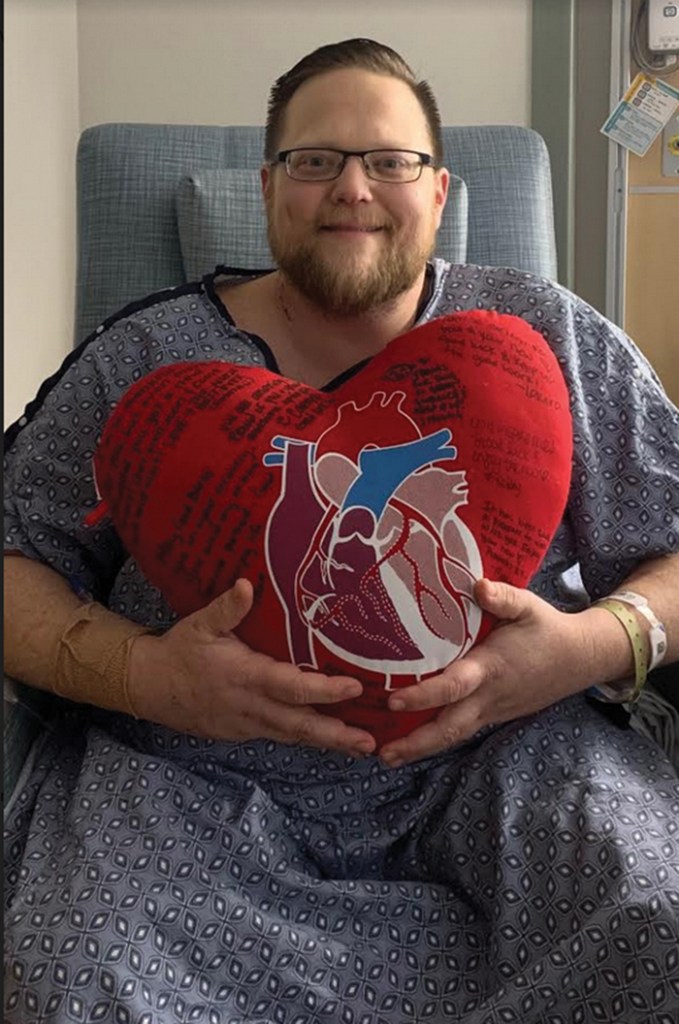 The doctors are in awe of Andrew's progress and the hard work he’s put in to recover from heart transplant surgery.

It was 2016 and Andrew was in a hotel in Montreal. The pain kept him up all night. He scheduled a flight and headed home the next day. Again he was up all night, in pain. The next morning he dropped into an urgent care clinic to have his neck looked at.

The urgent care doctor performed an EKG, called an ambulance and had Andrew transported immediately to Novant Rowan Medical Center.

A nurse called his wife, Aaron, and gave no details, saying that Andrew wasn’t doing well and was in an ambulance en route to the hospital.

“I had a conference call for work,” Aaron recalls. “Ordinarily I wouldn’t take another call, but I knew he wasn’t feeling well. After talking to the nurse, I ditched the conference call and drove too fast to the hospital.

“When I got there, he looked like death. He had no color. There were a dozen people around him, doing triage.”

He was in surgery within an hour. Andrew had 100% blockage in two arteries. One was at that critical juncture at the beginning of the left main artery. Blockages in this area are often referred to as, “widow makers,” because they’re fatal without emergency intervention. Doctors implanted three stints. A doctor later told the Ashleys that Andrew was lucky to be alive; he didn’t understand how he survived three days.

“We’re people of faith,” Aaron says, “and we strongly believe He had more work to do in Andrew’s life.”

Andrew was in intensive care for four or five days. “Within a day or two, we saw the effects of the heart attack,” Aaron says. “Andrew was so tired! Extremely tired. Emotionally, I think we were still in shock. How were we in this situation at age 36?”

Following release from the hospital, Andrew took the situation seriously. He dropped 80 pounds quickly and returned to work. He embraced a low-sodium diet and a healthy lifestyle. He returned to work, started to feel better, and his cholesterol, blood sugar and blood pressure were the best they’d ever been.

Until they weren’t. About two years after the heart attack, in 2019, Andrew once again began to feel really bad. He returned to Fazia and asked, “Is this the best I’m going to feel?” Knowing Andrew’s history and possible prognosis, Fazia referred him to the advanced heart health team at Wake Forest Baptist Medical Center.

On Andrew’s first visit to Wake Forest, doctors performed a heart catheterization with a camera and told him his heart was enlarging and not pumping blood properly to his organs. This created a risk of liver or kidney failure. They referred him for a heart transplant.

Getting on the transplant list, Aaron says, is a lot of hard work. There are extensive tests and loads of paperwork. Depending on the patient’s condition, the request priority can range from level six (lowest priority) to level one (immediate need). Andrew was given a level of six and told he was going to wait a really long time for a heart. It was October, 2019.

“We left that day, terrified and very sad,” Aaron says “How are we in this situation at our age? We were afraid of the transplant. But ultimately, we gave it all to God and asked Him to guide us, to lead us.”

The Ashleys returned to Wake Forest just a month later. Andrew was experiencing jaundice and retaining fluid. Doctors quickly realized he had to be bumped up to a higher priority.

“At this point it was all he could do to go to work,” Aaron says. “He couldn’t talk while walking. Just walking across the parking lot or going up a flight of stairs was too much for him.”

Andrew was admitted to Wake Forest ICU. Early on the morning of February 6, doctors came to him and announced a heart was available. Andrew and Aaron shared tears of joy. “We couldn’t believe it was happening so fast,” Aaron says.

The weather, however intervened. A rash of freak winter tornadoes tripped across the nation, grounding planes. Doctors returned to the Ashleys and advised they couldn’t risk staff lives to fly out to get the heart. Even in their disappointment, the Ashleys understood.

Miraculously, doctors returned a third time at 5 pm, saying the weather had cleared and the plane could fly out for the heart. The Ashleys signed paperwork, and Andrew went into surgery at 11:00pm. Surgery was over at 3:30 am.

After 22 days in the ICU, Andrew Ashley came home on Friday. He walks a mile a day. Some of his medications have tricky side effects, but the family is coping.

“It’s all short-lived,” Aaron says. “It won’t be forever.” She says the doctors are in awe of his progress and the hard work he’s put in to recover. She says when he was tempted to be sad or depressed, he asked himself, “Now what is that going to do for me?” 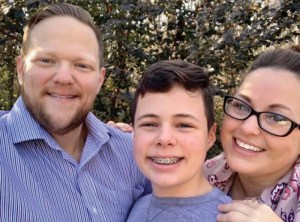 Aaron says she’s thankful for family. When she needed to stay in Winston to be with Andrew, the family had concerns for their son’s routine. Ayden is on the autism spectrum and attends North Hills School. Fortunately, her mom and dad, Nathan and Angie Harris, came to the rescue. They moved into the Ashley’s home to stay with Ayden while Aaron was away.

“With the transplant, our first question was how were we going to take care of our son? The ability of our parents to move in and alleviate that fear was incredible.”

After some healing, Andrew should be able to return to work. He can’t wait, Aaron says, to return to work and a normal life again. His office at Avgol in Mocksville, has faithfully called to check on him.

Aaron says their marriage is stronger than ever. “He’s just so strong that it makes me strong as well,” she says. “Spiritually, especially. I won’t say he doesn’t have fears; he does recognize his mortality. But his resolve on it and handing it all over to God. He had a strength and courage about it and a conviction, and he said, ‘It’ll be okay.’ We’ve been afraid together, we’ve cried together and we’ve been happy.”

Andrew has turned the whole experience from fear to gratitude. “What started out as the worst experience of my life,” he says, “Has turned out to be the greatest lesson I could have ever received. I am a better man with a deep appreciation for the blessings that God has provided me. The tremendous support from friends, family and even strangers has been overwhelming. Seeing so much love from so many has made this journey that much greater.”

It’s a long road ahead. Andrew has weekly trips to Wake Forest, weekly biopsies and lifelong medication. While insurance covers part of some prescriptions, others are not covered at all. There are significant hospital costs not covered by insurance.

Andrew’s best friend, Eric Reavis, has teamed up with Nathan Harris, Aaron’s dad, to organize a fundraiser to help with the costs. Press for the event, titled, “One Heartbeat,” encourages the public to “Come along to show support for a local man and his family as they make the difficult journey of a heart transplant.” Located at New Sarum Brewery, 108 North Lee Street, Salisbury, the fundraiser offers a corn hole tournament, silent auction, 50/50 raffle, food and live music. It runs from 12 noon to 7:00pm on March 1.