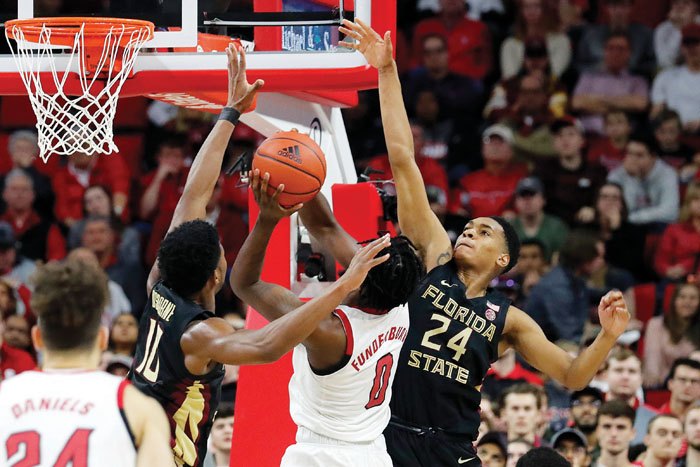 By AARON BEARD AP Basketball Writer
RALEIGH (AP) — Eighth-ranked Florida State responded to a halftime deficit with an aggressive edge, driving the paint and attacking the glass. The Seminoles even threw in a few zone-defense looks, an unusual sight for coach Leonard Hamilton’s bunch.
That combination gave the Seminoles an edge on the road against a confident team that had just soundly beaten a top-10 opponent.
M.J. Walker scored all 12 of his points after halftime to help Florida State take control and beat North Carolina State 67-61 on Saturday, keeping the Seminoles in the cluster atop the Atlantic Coast Conference standings.
“This time of year for our team, you’d like to think that you’re growing and maturing and adjusting to the things that are going on on the court,” Hamilton said. “I thought our guys responded very well in the locker room. We wanted to be more aggressive.”
The Seminoles (23-4, 13-3 ACC) did that at both ends after trailing 32-27 at halftime. They went ahead for good with about 13 1/2 minutes left against a Wolfpack team that beat No. 6 Duke by 22 points a few days earlier.
Devon Daniels scored 18 points to lead N.C. State (17-10, 8-8), which was trying to bolster its NCAA Tournament resume even more. But the Wolfpack shot 41% and couldn’t get to the line after halftime with the same frequency, a combination that turned scoring into a tougher test.
The frustration built for the Wolfpack, so much that coach Kevin Keatts picked up a technical foul with 9:21 left after Markell Johnson couldn’t draw a whistle on a drive.
Afterward, Keatts said he was “going to fight” for his team and pointed to FSU’s 29-13 advantage in free-throw attempts for the game.
“That’s tough,” Keatts said. “It’s tough because when you’re playing against another team that will pick you up full-court, typically like we do, and you play the entire time and there’s a disparity in free throws, I didn’t like it. I wasn’t happy with that part of it.”
BIG PICTURE
FSU: The Seminoles handled the halftime deficit with composure to win for the sixth time in seven games. They made 10 of 17 shots to take a 57-48 lead on Trent Forrest’s basket in the lane and were up big on the boards for much of the second half before finishing the half with a 23-17 advantage.
N.C. State: The Duke win helped push N.C. State to No. 51 in the NET rankings as of Saturday with five Quadrant 1 wins. But with only one more Quadrant 1 game left on the schedule, N.C. State could have helped itself by getting this one, too.
CLINCHED
The ACC said FSU’s win secured a top-four seed in next month’s ACC Tournament and the double bye into the quarterfinals that comes with it.
WALKER’S BURST
Walker was limited to 6 first-half minutes after picking up two fouls, but he had 10 points in the first 5 minutes of the second half.
“It was just being aggressive, driving the ball,” Walker said. “I think we were a little too passive in the first half from watching on the bench.”
IN THE ZONE
Hamilton said the second-half zone came after the Seminoles struggled to contain dribble penetration.
“That’s something we work on to keep in our package so that we can have something that throws other teams off,” Forrest said. “When you think of us, you don’t never-hardly-ever think of a zone helping us win games.
“So when we can do that and kind of change the pace of the game in our favor and have the other team kind of guessing on what we’re trying to do, I mean, we’ll take that any day of the week.”
TIP-INS
Patrick Williams also had 12 points for FSU. … Johnson, who had a career-high 28 points against Duke, finished with seven points on 3-for-10 shooting for N.C. State. … FSU has tied a program record for ACC single-season wins. … Malik Osborne had nine points and 12 rebounds for the Seminoles. … N.C. State shot just three free throws after halftime.
UP NEXT
FSU: The Seminoles host No. 11 Louisville on Monday with a chance to sweep the Cardinals after winning on the road on Jan. 4.
N.C. State: North Carolina hosts the Wolfpack on Tuesday, with N.C. State looking to avenge a home loss to the rival Tar Heels on Jan. 27.
___
More AP college basketball: https://apnews.com/Collegebasketball and https://twitter.com/AP_Top25
___
Follow Aaron Beard on Twitter at https://twitter.com/aaronbeardap