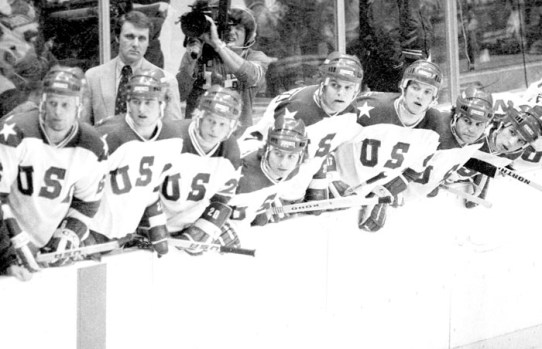 In this Feb. 22, 1980, photo, United States coach Herb Books and players look to the action on the ice during a medal-round game against the Soviet Union at the Winter Olympics in Lake Placid, N.Y. Tourism is a $1.2 billion industry in the Lake Placid region, much of it still fueled by the memory of the U.S. hockey team beating the Soviet Union as the “Miracle on Ice" highlight of the 1980 Olympic Games. (Tom Sweeney/Star Tribune via AP) 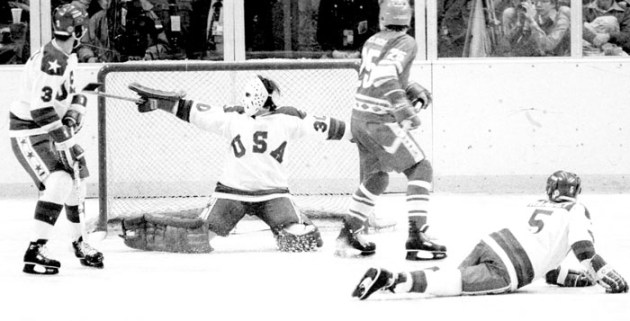 In this Feb. 22, 1980, photo, United States goalie Jim Craig sprawls to make a save on the Soviet Union's Vladimir Golikov during a medal-round game at the Winter Olympics in Lake Placid, N.Y. Tourism is a $1.2 billion industry in the Lake Placid region, much of it still fueled by the memory of the U.S. hockey team beating the Soviet Union as the “Miracle on Ice" highlight of the 1980 Olympic Games. (Tom Sweeney/Star Tribune via AP)

When the Summer Olympics begin in Tokyo in July, viewers will be able to watch every event either live or on demand. That wasn’t the case in 1980 when the United States stunned the Soviet Union during the Lake Placid Games.

The Americans’ stunning 4-3 victory in the Miracle on Ice game — which was played 40 years ago Saturday — was shown on tape delay because the game started at 5 p.m. Today that would be unthinkable.

“If you go back to what happened, cable TV is in its infancy, no internet, no national newspaper, no social media, none of what we have today,” said Al Michaels, who called the game. “So you could truly keep a lot of people in the dark as to what the result was.”

For many years, there were few Olympic events that aired live because coverage was mostly confined to prime time. During the Lake Placid Games, the only daytime coverage was on weekends and for the Feb. 13 opening ceremony. When the U.S. advanced to the medal round, ABC had discussions with the Russian Hockey Federation about trying to move the game to 8 p.m. Eastern, but no agreement was reached. Not only was it the height of the Cold War, but the U.S. had announced earlier that it was boycotting the Summer Games in Moscow after the Soviet Union invaded Afghanistan.

Michaels said ABC President Roone Arledge did consider showing the game live at 5 p.m. before opting against it.

In 1980, ABC aired only 51 hours over 13 days. Most of it was in prime time and on tape. For Tokyo, NBC will provide over 7,000 hours across eight networks and online.

It wouldn’t be until the 1988 Seoul Games that TV rights money started to have an impact on scheduling. With South Korea 14 hours ahead of New York, the Seoul Olympic Organizing Committee scheduled many high-profile finals between 10 a.m. and 2 p.m. so that they could air live in the U.S. That has mostly become standard practice since then when the Olympics are held in Asia.

ABC paid $15.5 million for the rights to Lake Placid compared to the $300 million NBC doled out for Seoul. This year’s Tokyo Games have a $1.5 billion rights fee.

Even though NBC’s coverage remains a delicate balance of live and taped, it has tended to skew mostly live due to the influence of social media. The 2018 Pyeongchang Games marked the first time there was live prime-time coverage in all time zones as well as both the opening and closing ceremonies being available live via online streaming.

The 2012 London Games marked the first time NBC made all sports available via online streaming.

In 1980, only three of the seven U.S. hockey games were shown in their entirety — the Feb. 16 game vs. Norway, the Soviet Union game and the Feb. 24 gold medal game against Finland. The Norway and Finland games were live since they fell on a Sunday. ABC was originally scheduled to start at noon on the final day of the Games but moved up its coverage to 11 a.m. for the start of the game.

Now, with the popularity of hockey, NBC usually devotes an entire channel to the men’s and women’s hockey tournaments along with multiple broadcast crews. Mike Emrick, who has called the Olympics for CBS and NBC, said during 1992 in Albertville and 1994 in Lillehammer he called games on 15 of 16 days.

“You’re happy and exhausted but it means so much,” he said. “You have more stories you can compile during the tournament because you are among the teams and it is a tournament.”

Besides the players, the Miracle on Ice also elevated Michaels to one of the top announcers. He was assigned to hockey in 1980 because he was the only one at ABC who had done a game.

“We had on that staff, I mean, that was the Mount Rushmore of announcers: Howard Cosell, Jim McKay, Chris Schenkel, Frank Gifford, Keith Jackson, Bill Fleming, you name it. I was the only guy who had done a hockey game,” he said. “I knew what icing and offsides were. So this is 40 years ago. You didn’t need to know much more than icing and offsides and just do the rudimentary play-by-play.

“It’s such a different world today, but I got that assignment. I was happy because among other things, when you’re doing a Winter Olympic sport, you want to be inside. So I was staying nice and toasty and warm, and of course as it progressed, there was never any opportunity for anybody else to come in and do those games, because again, at that point, by the time the Soviet game had taken place, I had done six games, and none of those guys had done any still. But you talk about getting fortunate. As I tell people to this day, there were not a lot of miracles on the biathlon course.”