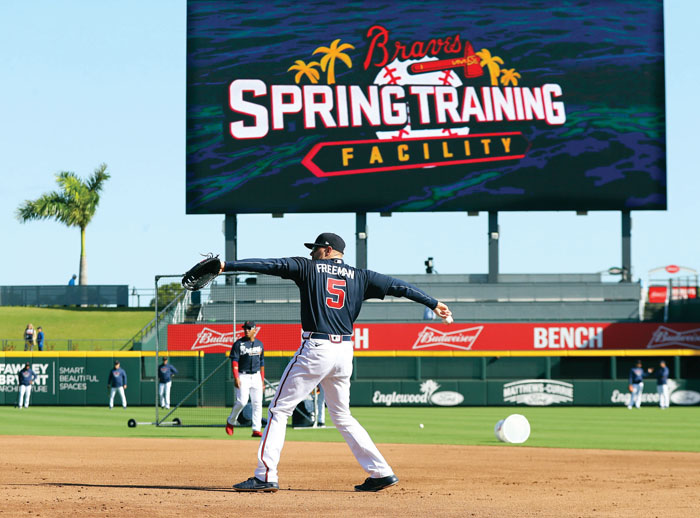 WEST PALM BEACH, Fla. (AP) — Fans hoping to heckle the sign-stealing Houston Astros at their spring opener were met with quite the coincidence.

They got their signs stolen.

In the Astros’ first spring training game since their sign-stealing scandal rocked baseball, some fans brought signs jeering Houston, and ballpark personnel confiscated them before the exhibition opener against the World Series champion Washington Nationals on Saturday night.

In a Series rematch, the Nats got hearty cheers, while everyone in an Astros jersey — including the mascot, Orbit — was booed. Houston did not use any players implicated in MLB’s probe.

Two men in Nationals gear sitting behind the Astros dugout briefly held up crudely drawn signs just before first pitch. One read: “You see my hate?” in large block letters. And another said: “Houston” with an asterisk below it, suggesting the Astros’ 2017 World Series title should be permanently blemished because of the cheating.

The men didn’t get to show off their signs for long. A woman who worked for the ballpark quickly approached to take the signs. They didn’t argue with the woman, but they did look confused as she walked away with them folded in her arms.

The Astros and Nationals share a spring training complex. Houston was designated the home team Saturday.

Matthew Silliman, who held one of the signs, said he didn’t know they were forbidden. He drove to the game from Tampa Bay and said he’s been waiting to let the Astros know what he thinks of them.

Commissioner Rob Manfred concluded last month the Astros violated rules by using a television camera to steal catchers’ signs during their run to the 2017 World Series title and again in the 2018 season. Manager AJ Hinch and general manager Jeff Luhnow were suspended for one season and then fired by the team, but players were not disciplined.

Fans booed loudly every time the public address announcer said “Astros,” and fans behind Houston’s dugout heckled Jose Altuve, Carlos Correa and Lance McCullers Jr. as they stood on the dugout steps before the game. A few fans banged on their metal seats, attempting to mimic the banging on a trash can the Astros used to relay stolen signs to hitters.

One fan in a Nationals jersey yelled: “Hey Altuve, are you scared to play tonight?” Others screamed “you suck!” and “cheaters!”

First-year Houston manager Dusty Baker said he didn’t think the reception was “too bad” and said his team will have to get used to it.

“You’ll probably get the same reception most places you go, especially the first go-round,” he said. “So, you’ve just got to put your big-boy pants on and then just try to shut it out and just play baseball and realize this too shall pass.”

Six games scheduled for the Cactus League were wiped out by heavy rain in Arizona. Flash flood watches were issued for the area, leading to opening day postponements or cancellations for Royals-Angels, Angels-White Sox, Reds-Indians, Brewers-Rangers, Diamondbacks-Rockies and Mariners-Padres.

Félix Hernández pitched two strong innings in his first appearance after ending his 15-season run with Seattle. He signed a minor league deal with Atlanta in the offseason and allowed only a walk and struck out two in his debut.

Ronald Acuña Jr. doubled and scored a run for the Braves. Ozzie Albies singled and walked, scoring twice, while Adam Duvall doubled in a run.

The Braves also got good news in the clubhouse, with lefty Cole Hamels rejoining the team after going to Dallas for treatment on his sore left shoulder. He’s still waiting for inflammation in the shoulder “to calm down” and expects to remain in North Port after Atlanta breaks camp for opening day.

Stroman gave up one run, three hits and a walk, striking out two while retiring four batters. J.D. Davis had a double for the Mets.

Andrew Benintendi had one of Boston’s seven hits and the Red Sox used a three-run eighth inning to win their opener.

Anthony Alford singled and stole three bases, including home plate in the seventh inning, for Toronto. Trent Thornton, vying for a rotation spot, allowed a walk in two scoreless innings.

J.A. Happ started for New York, pitching two perfect innings and striking out three. The Yankees’ run came in the ninth inning on a solo homer from Chris Gittens.

Willians Astudillo and Jake Cave had RBI singles in the third inning for Minnesota.

Jonathan Schoop, Christin Stewart and JaCoby Jones all had RBI singles in the second inning as Detroit took an early lead. Jordan Zimmermann allowed a hit and three walks, pitching two scoreless innings in a start.

Max Muncy, Chris Taylor and Enrique Hernandez each homered for the Dodgers, and right-hander Tony Gonsolin worked a clean inning in the start. Gonsolin is looking to build on his 2019 success, when he started six games and went 4-2 with a 2.93 ERA.

The Giants welcomed back former manager Bruce Bochy before the game and Hall of Famer Willie Mays was also in attendance. Mauricio Dubon and Joey Bart, the No. 2 overall pick in the 2018 draft, each homered, as did 25-year-old minor leaguer Ryan Howard.