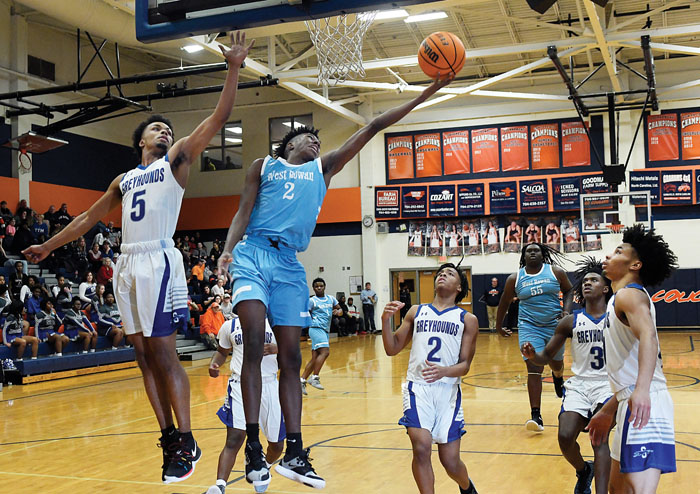 West Rowan's Jalen Moss (2) with a reverse layup during Friday night's NPC Tournament championship game against Statesville. The Greyhounds' Chris Brown (5) tries to defend on the play. The Falcons won, 65-59. ... Photo by Wayne Hinshaw, for the Salisbury Post

CHINA GROVE — The basketball looked  like an orange baseball in the mighty hands of West Rowan’s 6-foot-6, 335-pound Zeek Biggers when he stepped to the foul line with 3:41 remaining in Friday’s North Piedmont Conference Tournament championship game.

West trailed by one. Biggers flipped in two free throws to put the Falcons in front. Second-seeded West drew major confidence from those two unexpected foul shots and went on to upset top-seeded Statesville, 65-59.

“Zeek’s free throws were probably the turning point in the game because he went about 2-for-79 at their place,” West coach Mike Gurley joked.

Jalen Moss led the Falcons with 24 points, 18 in the first half, while Chaz McCombs got 10 of his 20 at the foul line. With Miykei Fields hobbled, Statesville got 20 from Jasiah Gathings and 18 from Chris Brown.

The victory won’t change the landscape as far as the 3A state playoffs. Statesville (18-6) still is going to be seeded around 6th in the West bracket, while West Rowan (16-9) is just hoping for a top-16 seed and a first-round home game.

But emotionally the victory meant a ton to the Falcons. Statesville had trashed them by 22 and 16 in the regular-season meetings. But now West has a trophy and its first conference tournament crown since 2011. A lot of West teams have come up short in NPC tournaments against Statesville,  but this one got over the hump.

“I’ve called my team champions all year and I’ve always believed they were champions, but they did come up short twice against Statesville,” Gurley said. “I told them tonight we had 32 minutes to change it, so let’s go do it.”

West got the solid start it needed with the help of a three-point play by Macari Allison. Sam Wood’s 3-pointer gave the Falcons a 14-7 lead after a quarter.

Moss was unstoppable on driving floaters and bankers in the second quarter. He had 14 in the period. West stormed to a 38-26 lead at the half.

“This was the first time that we’ve played Statesville that we’ve come ready to fight,” McCombs said. “We practiced hard for this one.”

A Statesville run was inevitable because the Greyhounds are really good at what they do. They can go at a pace the rest of the league can’t match when they can get out and sprint.

Gathings sparked that rally in the third quarter. When that quarter ended, West’s double-digit lead was long gone, and the Greyhounds had evened the game at 44-all.

The Greyhounds had all the momentum heading to the final quarter. Two quick buckets by Brown put Statesville up 51-47, and the Falcons, who had been outscored 25-9 over a 10-minute stretch appeared to be staggering against the ropes like a worn-out boxer.

But the Falcons dug down. They found their second wind.

West started getting critical stops by getting back on defense. Exceptional in a wide-open game, Statesville wasn’t as special when forced to play against West’s set defense. The 3-point tries clanged. Falcons rebounded.

The big free throws by Biggers put West back on top. Brown made two free throws for the last Statesville lead at 55-54, but McCombs, a football defensive end, muscled in a three-point play for the Falcons for a huge swing.

“We were working  it inside, and that’s where we’ve got the advantage on Statesville,” McCombs said. “They’ve got great athletes, but we’ve got height.”

“McCombs made so many tough plays inside,” Gurley said. “He’s our leader and he was focused tonight and fighting. When he’s like that,  our other guys will come along with him.”

There were important defensive plays late by Allison and Jay Joseph. Down six, Statesville missed a 3-pointer with 30 seconds left. Allison made the clinching free throws.

“The last five minutes, we made it a half court game,” Gurley said. “That’s how we won. You can’t run with Statesville for 32 minutes.”