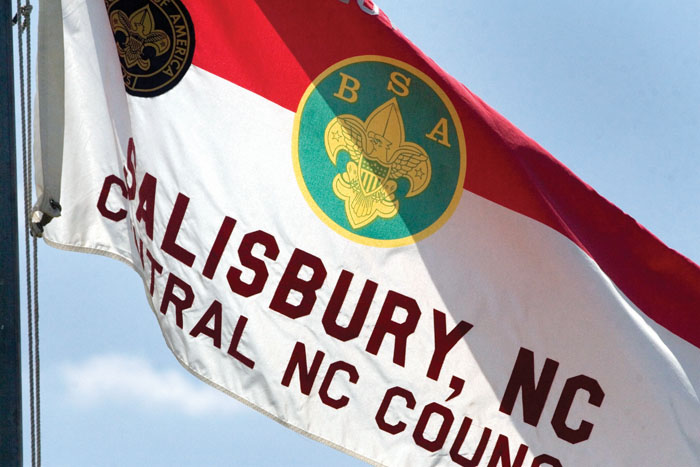 One of the troop flags represented at Camp Barnhardt. Photo by Andy Mooney, Salisbury Post.

SALISBURY — Central North Carolina Council Executive Stuart Williams has a simple message for local scouts and their families: local programming won’t be affected by the Chapter 11 bankruptcy declared by the Boy Scouts of America.

The Central North Carolina Council, though, is a separate nonprofit organization. Williams said it operates like a local franchise and pays fees to the national chapter. The local council serves more than 7,000 youth in Rowan, Stanly, Cabarrus, Union, Anson, Richmond and Montgomery counties.

“Scouting will continue at the local level because of people who continue to invest in our local youth,” Williams said. “These are people who believe and see that their local dollars are creating local impact. We, at the Central North Carolina Council, are vested in our local communities, where our local dollars continue to make a positive difference on our local youth and emerging leaders. Because of that, it is important to understand that the national headquarters’ decision is in no way a reflection of your local council’s financial status.”

That means summer camps, camporees and Order of the Arrow events will continue without interruption, he said.

“The national office is mainly a resource in building and the oversight of all the councils so that scouting looks the same, and they are the ones that collect membership fees,” he said. “The programming, camps and actual local scouting is all handled through the local councils.”

“Local dollars from local donors supporting local youth — your dollars — stay here and that is how we continue to work together to train, empower and inspire tomorrow’s leaders today,” Williams said in a letter directed at members of the scouting community.

Williams said there are no open cases involving local scout leaders. In 2014, the Central North Carolina Council banned James Paul Barringer III, a China Grove Middle School teacher and scout leader, after he was alleged to have inappropriately touched scouts during trips. Warrants at the time showed he admitted to investigators that he had molested boys on scouting trips and at a church sleepover. The incidents occurred at a house on High Rock Lake and in Barringer’s tent in the two years before charges were brought.

Williams stressed youth protection measures that include a requirement to register all adults present at activities for more than 72 hours and a prohibition on one-on-one contact between adult leaders and youth. Separate accommodations are required for adults and youth, as well as separate shower and bathroom facilities. And Williams called Boy Scouts the “No. 1 youth protection organization.”

“We’ve been very aggressive to make sure we are the standard on how to protect our youth,” he said.

He also said nearly all of the cases that have prompted the national chapter’s bankruptcy stem from decades-old cases.