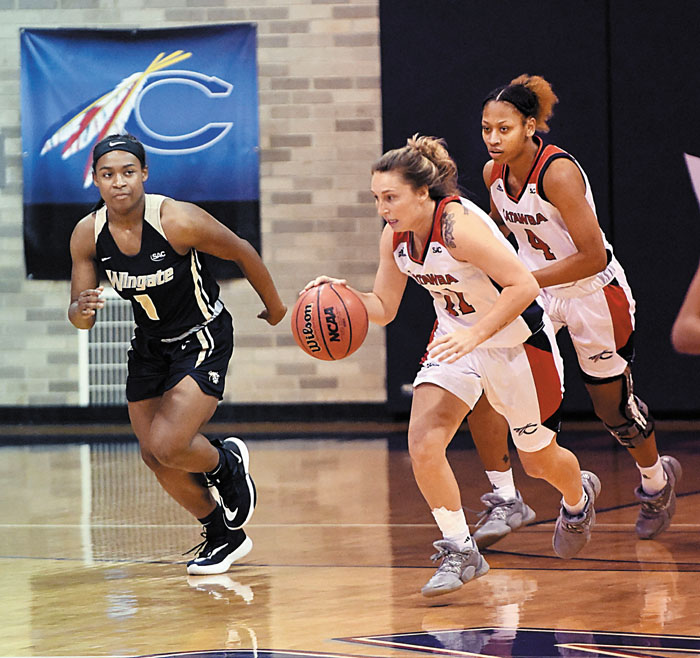 In an earlier game this season, Catawba's Madison Hallman (11) dribbles the ball upcourt against Wingate. On Saturday, Hallman and her teammates enjoyed a Senior Day win over LMU, 74-54. .... File photo by Wayne Hinshaw, for the Salisbury Post

SALISBURY — Senior Kaitlin Stevenson usually sits pretty far down Catawba’s bench, but she swished a 3-pointer just before halftime on Saturday, as her teammates and coaches went crazy.

And that’s what Senior Days are all about.

“Usually I’m the one trying to pick my teammates up out of the dirt,” Stevenson said. “But today I had a whole team lifting me up.”

Catawba’s Senior Day was positive, a solid 74-54 South Atlantic Conference victory against Lincoln Memorial. It will be memorable for starters Madi Hallman and Keyotta Garris as well as for Stevenson.

“Stevenson is a joy to be around every day,” interim head coach Terence McCutcheon said. “She’s sunshine.”

Stevenson will be joining Catawba’s softball team after the basketball season, but she had a moment in the hoops spotlight Saturday. She can talk about that 3-pointer for years. It was a long one, and it will get a little longer as the years pass.

“I was a little nervous starting a game because I’m the team goof,” Stevenson said with a grin. “Today I had to be serious.”

Catawba (21-4, 16-4) had turned in a series of seriously bad starts, but not this time. The Indians were super on both ends in the first quarter and dashed to a 23-5 lead against the dazed Railsplitters.

“Senior Day did a lot to fix our focus,” McCutcheon said.

Catawba got off to that terrific start, even though it played without leading scorer Taisha DeShazo. Lyrik Thorne, a freshman guard, took over early. Catawba scored 21 unanswered points. Thorne made 3-pointers for 16-3 and 23-3 leads.

“We were down a scorer, so I knew I had to come out and be aggressive,” Thorne said. “I was going to do everything I could to make sure we won. This was  important for our seniors.”

“Stevenson can shoot, that’s something we see every day in practice,” McCutcheon said. “As soon as she let that one go, we all knew it was good. I was putting my hands up.”

Lincoln Memorial (10-14, 9-11) got 16 points from Sydney Newsome, who made 10 free throws. The Railsplitters made a nice run in the third quarter and sliced Catawba’s lead to 13, but the Indians stabilized after a 3-pointer by Shemya Stanback and a driving bucket by Thorne.

“We knew they’d come out of the half with their best punch, but we kept our composure,” Garris said. “We’ve been put in a tough position as a team, but we’re holding up. We’ve got a lot to work for.”

Senior Day for Hallman, who came to Catawba from East Davidson High, 30 minutes up the road from Salisbury, drew a full cheering section of her uncles, aunts and cousins. Hallman didn’t shoot much, three shots in 26 minutes. Mostly she just enjoyed seeing teammates such as Shaunae Sawyers, Sara McIntosh, Talia Barnes and Mercedes Wampler have good days. She took another charge, and smiled as her teammates picked her up.

“It was hard not to cry during the national anthem because you’re just standing there thinking about everything, and it’s emotional,” Hallman said. “But when the game started, everything was fine. We moved the ball, passed the ball, played team ball. Early in the season we were getting 30 points off the bench, and it was good to see us get back to that today. We played today the way we need to play all the time.”

NOTES: With regard to DeShazo, athletic director Larry Leckonby said “an issue was discovered this week and Catawba looks forward to resolving it.” … Leckonby added that “there’s no change in the status of head coach Terrence Baxter.” McCutcheon is now the interim head coach as opposed to being the lead assistant, so it’s very likely he’ll be in charge the rest of this season … Catawba shot well above 50 percent for three quarters and went 10-for-21 on 3-pointers for the game. Thorne was 3-for-4 from long range, while Sawyers was 2-for-3. … The dependable Garris, who had eight points and seven rebounds, looked like she’d been in a car wreck after the game. It was a rough one, with lots of bodies on the floor.