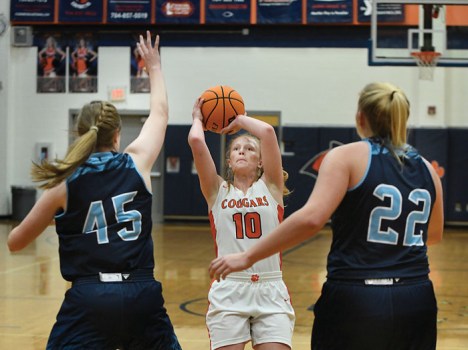 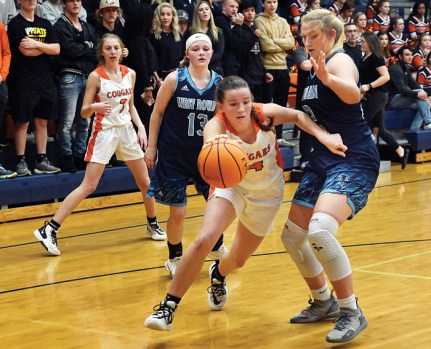 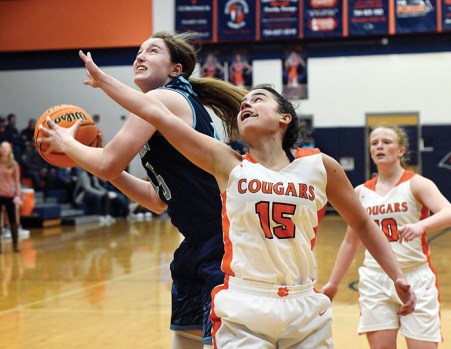 But this was a study in perseverance for Carson and a study in frustration for the Falcons.

West has size and is a challenging matchup for Carson, which doesn’t. But weird things happen when West and Carson tangle. The best player in Friday’s game turned out to be Carson 5-footer Maci Cooper.

“A game like this, you can’t give up,” Cooper said. “We had a bad first half, but we kept pushing.”

As far as the upcoming 3A state playoffs, Carson’s exciting win won’t shake anything up. The Cougars will be seeded somewhere around No. 6 in a 32-team bracket. West will be seeded in the teens, but should get a first-round home game.

As far as bragging rights, it meant more. Top-seeded Carson (23-3) took its second tournament trophy in the last three seasons, Second-seeded West (20-5) hasn’t taken a tourney title home since it won against Hickory Ridge in a South Piedmont Conference thriller in 2016.

Carson had demolished West in Mount Ulla late in the regular season, with Lani Isley’s driving penetration being a key to victory. West solved that problem by putting a taller, longer defender on Isley. Cindy Connolly is 5-foot-9, seven inches taller than Isley, and she prevented the Carson guard from causing much trouble.

Carson didn’t do much right early, while West didn’t do much wrong. West’s 6-foot-1 Whitley Arnott had the best eight minutes of her basketball life. Arnott, who averages 6 points, scored 10 in a hurry. Taylor Poole made a 3-pointer, and West led 15-8 after a quarter.

“I thought we were in trouble,” Carson coach Brooke Stouder said. “We didn’t pressure them. We didn’t box out.”

Basically, it was a layup drill for the Falcons.

When Abigail Wilson and Connolly ended the first half with stick-backs, the Falcons led 31-24.

Cooper scored eight in the second quarter to keep Carson in the game. She made a 3-pointer and five free throws. Cooper, who comes off the bench, had 13 of Carson’s 24 first-half points.

Two of her free throws came after she grabbed an offensive rebound.

“The shots weren’t falling for any of us,” Cooper said. “But you have to do something. You have to find a way to contribute. So I was driving, taking it inside.”

Crushed by stick-backs in the first half, Carson fixed that issue in the second half. The Cougars boxed out, and it’s hard to box out West  because you have to front Wilson, a UNC Asheville signee who is the leading scorer in program history.

“You have to front the post against them and hope you get help if they lob it over you,” Carson’s Ellie Wilhelm said. “They’re really big. We knew it would be a hard.”

Carson was down 10, but that was the turning point.

West experienced a drought, missing five point-blank shots on its next three possessions.

Lani Isley got a bucket, and Wilhelm made a 3-pointer. Carson was down 42-37 after three quarters.

“We talked about getting that 10-point deficit down to five by the end of the quarter, and we did it,” Stouder said. “That was huge.”

Early in the fourth quarter, Hannah Isley made a 3-pointer for the Cougars for a 42-all tie. Carson had a 10-0 run.

West regrouped. Arnott scored for the first time in a while.

When Wilson overpowered the Cougars for a three-point play with 2:56 remaining, the Falcons led 50-44 and appeared to be back in control.

But then Colbie Perry, who had been silent, made 3-pointers on back-to-back trips down the floor for 50-all. Her second bomb ripped through the cords at the 2:11 mark.

Next came the amazing Cooper and-one that would prove decisive. Somehow she got the ball up through a defender at the rim. The shot fell and she also made the free throw for a 53-50 Carson lead.

Wilson cut Carson’s lead to one with the Falcons’ final points, but Carson was able to play keep-away down the stretch.

West didn’t have enough team fouls to put Carson on the line, until Wilhelm finally headed to the stripe with 12.6 seconds left.

Wilhelm made her first one for a 54-52 lead. When she missed her second free throw, the Falcons got the ball down the court quickly. Connolly had a shot in the lane to force overtime, but it wouldn’t fall. Wilhelm won the scramble for the rebound under the hoop, and it was over.

“I saw that last shot going up, and it looked good, but I boxed out,” Wilhelm said. “Then the ball hit the floor, and I knew I had to go get it.”

There was a lot of second-half boxing out by undersized Cougars such as Wilhelm and Taylor Conrad. West got no points off offensive rebounds in the second half.

Hannah Isley had seven rebounds. Cooper went 8-for-9 at the free-throw line.

Arnott’s 17 points were a career high for the senior. She scored two against Carson in the last meeting. Wilson had 20, the 10th game in a row she’s had at least 20. Connolly had a big tournament and scored 12.

Seeds and pairings will be announced Sunday. First-round playoff  games are Tuesday.