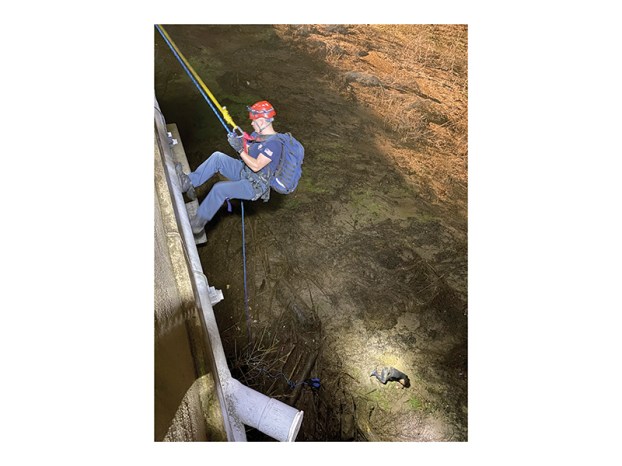 Salisbury Firefighter Jacob Vodochodsky repels down the side of the Yadkin River bridge to rescue Jeremiah Cribbs down below. Cribbs and another FedEx employee pulled over to help a driver who'd been involved in an accident. A tractor trailer driver was traveling close to the shoulder nearly hitting Cribbs. He jumped over the median thinking it was grass below and fell 75 feet into a muddy area. Photo by Salisbury Fire Department

Quotes of the week: ‘I just reacted’

“When I realized he was going to hit the car, which he did … I just reacted. It’s pitch black dark. I was thinking I was hopping over a median … I just started free-falling.”

— Jeremiah Cribb, who jumped off of a bridge on I-85 over the Yadkin River early Thursday morning to avoid behind hit by a vehicle.

“Between my mom and grandmother, watching those people give back, I just knew I wanted to help people.”

— Alisa Russell, who  is being honored this weekend during the “Legacy of a :Eader” program at Southern City Tabernacle AME Zion Church in East Spencer.

“Our democracy right now is on life support and the vote in any democracy is at the heart of the system.”

— Keith Townsend, who spoke to the Rowan County Board of Elections Thursday earlier this week about the need to add Sunday early voting.

“Chewy is coming and we are in no way prepared for that many people to come across the bridge to work, live and buy services in Spencer. I think we need help.”

— David Karczewski, a Spencer resident and member of the town’s planning and historic preservation boards who is leading an effort to get the town on an HGTV show.

“I guess it was just one of those moments. Catherine and I looked at each other and it was like, ‘How can this not be where we are meant to be.’”

— Ben Hampton, who is leaving North Rowan High after five years as its football coach to take a similar position in the Myrtle Beach, South Carolina, area.