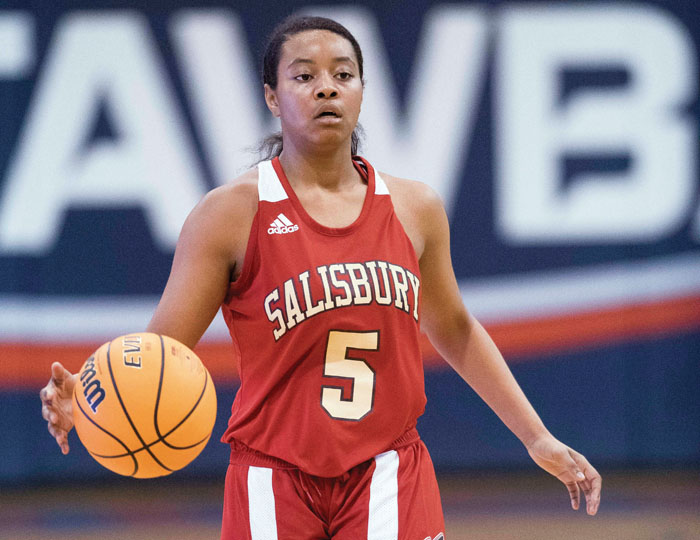 JON C. LAKEY FILE PHOTO/SALISBURY POST ... Salisbury’s Kyla Bryant (5), shown during a game in the Dale’s/Sam Moir Christmas Classic, on Dec. 27. Bryant, a freshman, is the leading scorer for Hornets, 24-1 this season.

SALISBURY — It won’t be official until Sunday afternoon or evening when the NCHSAA releases seeds and pairings, but Salisbury’s girls basketball team is expected to be the No. 1 seed in the 2A West bracket.

In the latest MaxPreps adjusted rankings, the Hornets are second in all of 2A, and there’s no doubt that Farmville Central, the team ranked ahead of the Hornets, will be in the East bracket.

The top two seeds in each region have an opportunity to play four home games in the playoffs. As long as they keep winning, they don’t have to get on a bus until the regional final.

“We’ve put ourselves in position to play home games,” Salisbury senior Anayia Fulson said. “And we do love playing at home.”

Salisbury (24-1) isn’t overly big and isn’t overly deep, so foul trouble or an injury could be devastating in the playoffs. But the Hornets haven’t minded playing on anyone’s home court so far. The only loss this season was to West Rowan at Catawba’s Goodman Gym in a Christmas tournament semifinal. West’s size and experience — five senior starters — proved too much for the Hornets in December, but Salisbury has grown a lot over the last few months.

Salisbury is ranked 21st in the state by MaxPreps. That’s for everybody, including the 4A schools. To put that in perspective, Carson is 42nd, West Rowan is 76th, East Rowan is 94th, and North Rowan is 194th.

Even Salisbury head coach Lakai Brice didn’t see it coming. Not this fast and not this soon. Along with Fulson, Salisbury starts two freshmen and two sophomores. The first person off the bench is another freshman.

“People overlook how young we are because we usually haven’t played like it,” Brice said.

But where the current Hornets excel is on the defensive end. They allow 32.4 points per game.

That’s the stingiest defense for the program since the 29-0 Hornets of 2010, who were among the county’s greatest teams ever. That 2009-10 team, which had seven future college players, scored 62.2 per game, while allowing 29.3.

Salisbury sets defensive objectives every game. Hold this team to 25 or hold that team to 30. Hold everyone to single digits every quarter. That’s given them a way to keep things competitive in easy league games they knew they were going to win from the opening tip.

“Most our practice time is spent on defense and most of our offense comes from playing good defense,” Brice said.

Fulson, who has scored more than 1,200 career points, has proven to be an excellent floor leader. She’s been in seven playoff games, including four last year when Salisbury lost at home to Forbush in the fourth round.

Freshman Kyla Bryant, Brice’s daughter, is the team’s leading scorer. She usually gets 14 or 15, although she had a career-high 21 Wednesday in the Central Carolina Conference Tournament semifinals.

Brice said before the season that freshman forward Jamecia Huntley might be as athletic as anyone Salisbury has ever had, and she hasn’t disappointed. She’s a double-double waiting to happen.

The other key players are the sophomores, Rachel McCullough, a deadly 3-point shooter who always commands defensive attention, and Jaleiah Gibson, an aggressive rebounder. Freshman Mary Morgan is first off the bench. She brings defense and can guard big people or small people.

“Defense is our main thing, but we’ve also put in a lot of work to be better shooters,” Fulson said.

Salisbury is an unusual team in that three seniors — Jaliyah Oats, Jonnessha McEntyre and Jenesha Mashore — don’t play a lot, but they’ve still been leaders and good teammates. Junior post player Jania Bolder is the other reserve on a 10-girl roster.

The top-seeded Hornets are scheduled to play seventh-seeded Oak Grove tonight for the CCC tournament championship at 6 p.m. at Lexington.

Salisbury lost in last season’s tournament title game to Lyrik Thorne and Ledford.  Even Fulson has never tasted a conference tournament championship, so the Hornets will be taking this one very seriously. They’d like to get all the seniors a tournament title.

Oak Grove (16-10) has balanced scoring and upset second-seeded Ledford and third-seeded North Davidson to get to the championship game. Salisbury won 53-42 at Oak Grove in December and throttled the Grizzlies 48-22 with defense on Jan. 31 in the Salisbury gym.

“We try to keep it simple,” Brice said. “Play hard and play together. If you do those two things, you can be tough to beat.”