Fifth-graders get to enjoy state symphony during Catawba performance 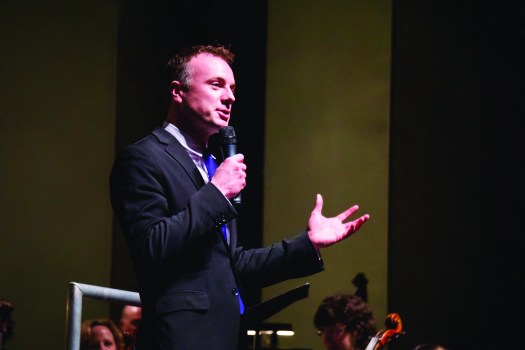 SALISBURY – On Wednesday every fifth-grader in Rowan-Salisbury Schools got to see one of the state’s elite orchestras.

The symphony performs a few dozen educational concerts throughout the state every year and about half of those are in Raleigh. Rowan County is always on the list.

“Many of our students, I feel pretty comfortable saying, have never seen a live performance like this before,” Harwood said.

Every fifth-grader in the district gets to take the trip to Catawba College’s Keppel Auditorium at no charge.

The kids got to do more than just see the state’s official symphony play. Associate Conductor Wesley Schulz spoke to the students throughout the program, telling them about music concepts they were about to demonstrate with their next piece. Rhythm, tempo, dynamics, where each section of the symphony is placed, what they play and what they sound like were all presented to the students.

There was even a bit of history mixed in. The symphony played “Rhapsody in Blue,” a popular jazz-infused composition by George Gershwin, and Schulz made a point of telling students the piece premiered in 1920s, when jazz was at the forefront of popular American music.

The students got to join in, too. Toward the end of the program all the students in the audience stood up to perform a recorder piece together.

The group even got the chance to sing traditional Mexican folk song “De Colores,” while accompanied by the symphony.

Harwood coordinated the music the students performed during the concert. Every fifth-grader in the district had to learn the pieces in their music classes to perform on Wednesday.

“Some of them, even though they talk about it in class, are still amazed there are real musicians on the stage playing this music together,” Harwood said.

Salisbury’s own musical institution, the Salisbury Symphony hosts the program, coordinating with N.C. Symphony and the college to make the concert a reality. Salisbury Symphony Education Director Elizabeth Cook said her favorite part of the program is that every fifth-grader gets the opportunity to hear the symphony play.

N.C. Symphony Director of Education Jason Spencer said the concert is among the largest audiences for its education concerts.