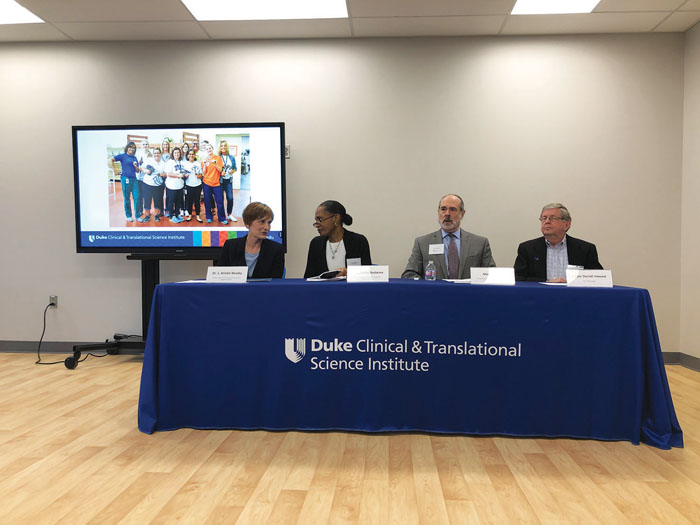 Natalie Anderson/Salisbury Post — Duke Clinical and Translational Science Institute doubled its space to 10,100 total square feet on Wednesday. Speakers at the ribbon-cutting ceremony included (from left to right) Dr. Kristin Newby, the director of TransPop and principal investigator for the MURDOCK study; Dr. Ebony Boulware, the director of Duke CTSI; Mark Spitzer, the president of Castle & Cooke NC, which is the developer of the NC Research Campus; and Kannapolis Mayor Darrell Hinnant.

KANNAPOLIS — As downtown development in the city continue to sprout, the Duke Clinical and Translational Science Institute at the North Carolina Research Campus is following its lead.

On Wednesday the institute held a ribbon-cutting ceremony for new office space that doubles the size of its presence in Kannapolis.

The program started in 2007 with one employee in a former downtown retail shop. On Wednesday, Duke CTSI officially opened  space to house the Translational Population Health Research Center, or “TransPop,” which includes 12 exam rooms, expanded lab space and participant lockers across its 10,100 total square feet.

Kannapolis mayor Darrell Hinnant credited Duke and the research program with putting Kannapolis on the map. He also praised the collaboration between Duke and others for conducting such important research and recruiting thousands of people for studies, which contributes to the sense of community.

“A community is more than brick and mortar,” Hinnant said after the ceremony. “It’s the people that make it a community.”

The TransPop space allows for continued research of the Measurement to Understand the Reclassification of Disease Of Cabarrus and Kannapolis, or MURDOCK, study, which is Duke’s landmark research program dedicated to reclassifying health and disease and further advance the understanding of human health. The study primarily looks to evaluate links across major diseases and disorders. It’s now in its second decade.

Mark Spitzer, president of Castle & Cooke NC, which is the developer of the NC Research Campus, started his remarks at the ribbon-cutting ceremony with a moment of silence to honor Rep. Linda Johnson, who died on Tuesday. He credited Johnson with being one who was “instrumental in making all this happen.”

Hinnant echoed the remarks after the meeting, crediting Johnson with helping to get the funding for the campus development.

And Dr. Kristin Newby, director of TransPop and the principal investigator for the MURDOCK study, expressed excitement for the opportunity to continue to study and improve human health.

Dr. Ebony Boulware, director of the Duke CTSI, also attended along with other community collaborators and study participants.

The new space also allows for a view of the new Kannapolis Sports and Entertainment Venue, which will serve as the field for the Kannapolis Cannon Ballers baseball team.