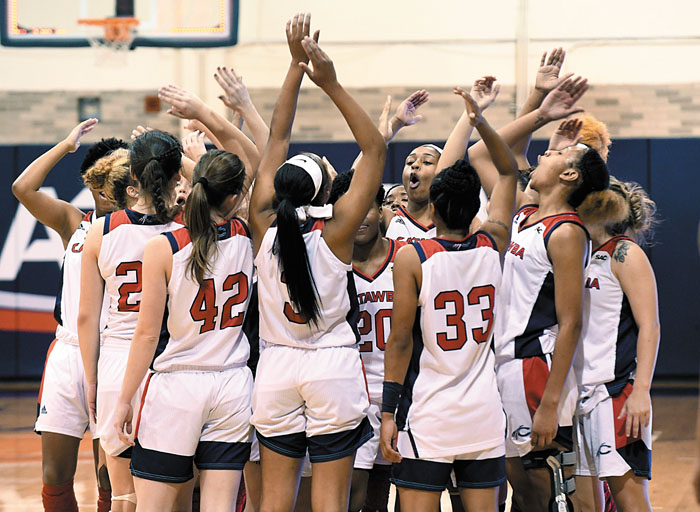 SALISBURY — Basketball seasons are long, the homestretch is here, and it’s impossible for everyone to bring it every game.

Filling in for the fifth straight game at the helm of the Indians, assistant Terence McCutcheon had his patience sorely tested by the troops during Wednesday’s 62-51 win over Queens at Goodman Gym.

Had their been a ledge handy near the Catawba bench, McCutcheon gladly would have jumped off it. Catawba made 11 turnovers in the first quarter.

“Not a great start tonight,” McCutcheon said quietly. “We also got off slow at Carson-Newman Saturday (down 30-8 right away), so we’ve gotta fix it. We got lucky tonight. We weren’t playing Carson-Newman.We wouldn’t have survived that start against one of the top teams.”

That’s not to insult Queens, but the standings don’t lie. Queens (5-20, 4-20) resides in 11th-place in the 12-team South Atlantic Conference. Catawba (20-4, 15-4) is in second place, so the Indians were expected to handle Queens with few problems, especially at home.

But it wasn’t routine and it wasn’t easy because eight minutes into the game, Catawba had managed to score a measly three points and trailed by eight. Those three points came in the first 20 seconds on Taisha DeShazo’s 3-pointer from the left corner. After that, there was nothing positive for a very long time.

“I came out, made that first one, and I was thinking, ‘OK, this might be a good night,'” Deshazo said. “But we just weren’t taking care of the ball and we weren’t making good decisions. We’re too smart to be playing the way we played.”

Lyrik Thorne finally connected for the Indians’ second bucket, a 3-pointer, with 49 seconds left in the quarter. Janiya Downs made the Indians’ first trip of the night to the foul line after an offensive board. Her free throws cut Queens’ lead to 12-8 after a quarter.

It got worse, before it got better. Catawba was 3-for-25 from the field — that’s 12 percent — when Madi Hallman made a jumper with 5:31 left in the second quarter to give the Indians a 13-12 lead. Then she got a steal for a layup. Then she scored in the lane. Then she made a 3-pointer for a 23-18 Catawba lead.  Hallman scored nine in three minutes. That turned things around.

“Well, the threes weren’t falling and we weren’t rebounding great, so we had to take it inside more,” Hallman said.

When DeShazo soared in for an offensive rebound/putback to close the half, Catawba took a 25-20 lead to the locker room.

In that first half, Catawba shot 28.1 percent and committed 16 turnovers. The Indians didn’t look much like a team that is currently sixth in the regional rankings.

“Our defensive energy usually leads to a lot offense, but we struggled to get the defense going,” McCutcheon said. “Stanback always gives us a boost when she comes in the game, but she got in foul trouble.”

Queens wouldn’t go away. The Indians led only 33-29 with 1:12 left in the third quarter. Keyotta Garris converted a layup for the Indians — they didn’t make many — for 35-29. DeShazo’s 3-pointer late in the shot clock was as big a shot as anyone made. It put Catawba up nine going to the fourth quarter.

“We took it to the hole more and put some pressure on them,” DeShazo said. “And when we take it to the hole, it opens up the shooters.”

DeShazo finished with 22 points and seven rebounds. She scored 14 in the second half. Hallman had 15 points, five rebounds and three assists. Thorne scored 10. Garris had eight rebounds.

With 2:15 left and the shot clock winding down, Hallman swished a 3-pointer from way out for a 10-point lead.

“I couldn’t make them from right on the 3-point line, but I made that one from 5 feet behind it,” Hallman said, shaking her head. “We all made our shots at the end. That’s what matters.”

As much of a struggle as it was for three quarters, Catawba is still only one game behind Anderson in the SAC race and one game up on Tusculum and Carson-Newman, the other two contenders

“We need more focus if we’re going to get back on track,” McCutcheon said. “But at the end of the day, we got another win tonight. That’s what we went out there to do.”

NOTES: No new information was offered on head coach Terrence Baxter, who has been away from the team the last five games. “Personal reasons,” is still the official word. … Catawba hosts Lincoln Memorial, one of the middle of the pack teams, on Saturday. After that, it’s two road games, one of them at Anderson, and then the SAC tournament.