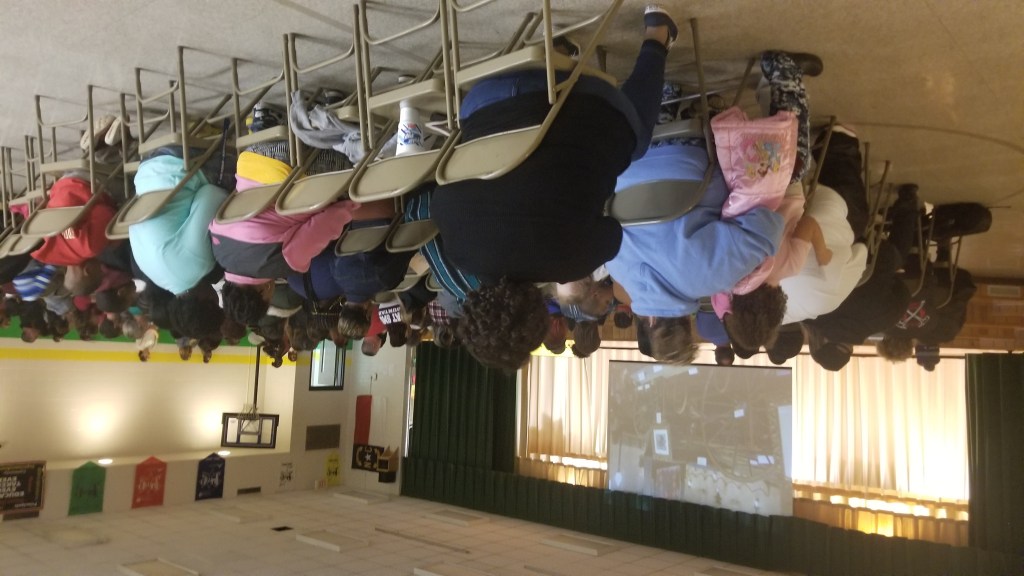 Carl Blankenship/Salisbury Post - The crowd in North Rowan Elementary's auditorium filled all the regular seats and spilled over into the cafeteria area in the back. The program mostly consisted of music mixed in with skits of kids playing important African American leaders with quotes and biographic information

SPENCER – North Rowan Elementary School students highlighted some of the most important moments from history and locals at its fourth-annual Black History Month Gala.

The program featured a mixture of music, both recorded and performed live, with voiceovers by students delivering information and quotes as they played leaders ranging from Rev. Martin Luther King Jr. to Salisbury Mayor Pro Tem Al Heggins. The theme for the evening was “From Africa to America Along the Underground Railroad to Free-ish.” School Counselor Leanese Woods organized the program and said the Underground Railroad is still part of African-American history.

“I used the word free-ish, because are we all completely free?” Woods asked. “That’s not only for myself, but everyone that was here tonight and anyone else in the world. We’re on the way to being free.”

Woods said students who participated in the skits were rising into fourth or fifth grade. Students had to read and do some research for the gala. Initially, some of the kids stumbled over words when trying to learn quotes, but they practiced until they could perform.

Some of the kids have been at North Rowan for all four galas and say they get excited every year. That excitement is contagious, as one boy who was not a student at the school who got so excited that he went up with pre-K and kindergarten student to sing “He’s Got the Whole World in His Hands” at the end of the program.

Historically important songs “Lift E’vry Voice and Sing” and “Follow the Drinking Gourd” also were musical features of the night.

Music teacher Marcus Carpenter said he includes history about the songs when he teaches them to the students. Students learned, for instance, that the drinking gourd in the song title is referencing the pattern of stars more widely known as the Big Dipper, which was used for navigation by escaped slaves as they followed the Underground Railroad.

Bria Johnson is a second grade teacher who also coaches the school’s step team, which performed at the gala. The team started last year and was geared toward students who need an expressive outlet, but now the team has been opened up to grades 3-5. There are a couple of first graders and a kindergartner on the team as well.

“The step team is pretty much like a family,” Johnson said. “They love hanging out together.”

The team practices every Tuesday and Thursday.

Principal Katherine Bryant said she wants to make sure children are learning about their own culture, and that they should be proud of it.

“Sometimes that’s not in our history books, and so this is where our community members provide,” Bryant said. “The NAACP is a huge sponsor.”

After the main program ended, the school had dinner ready for everyone who attended.