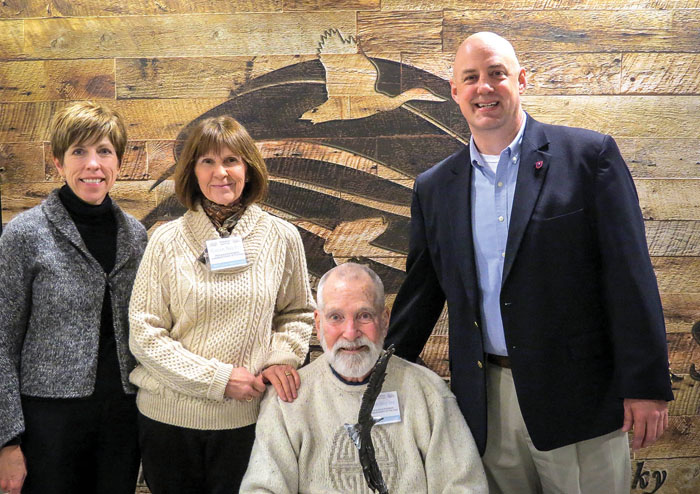 Three Rivers Land Trust hosted its 4th annual Conservation Awards on Jan. 31 at the Gateway Building in Salisbury. Awardees were recognized for their continued support for  the trust in their conservation mission.

The Fred and Alice Stanback Conservationist of the Year Award went to Mike Snyder. Mike donated a conservation easement on their 410-acre property in 2019, and by doing so protected an important wildlife corridor along Mountain View Church Road just west of Morrow Mountain State Park.

This unique property possesses mature hardwood forest, and is also known as the Palestine Rare Plant natural heritage site, due to several rare species found there.

The North Carolina Wildlife Resources Commission (NCWRC) were awarded the Bill and Nancy Stanback Governmental Conservation Partner of the Year. NCWRC was a significant partner of Three Rivers Land Trust in the conservation of the Alcoa Lands on High Rock Lake in 2019 – a 2,463-acre property possessing 45 miles of shoreline that will now forever be conserved and belong to the public trust for their use for hunting, hiking, fishing, paddling and other recreational avenues.

Jessie Birckhead and Brian McRae were in attendance to accept the award on behalf of the commission.

The Conservation Partner of the Year award went to the Fort Bragg U.S. Army Compatible Use Buffer (ACUB) Program. ACUB is a significant partner to Three Rivers Land Trust in conserving important lands in Moore County.

Just last year, the ACUB program helped the Land Trust protect two important properties with conservation easements buffering training lands held by TRLT and used by the Army. Barry Hull and Peter Edmunds accepted the award on the behalf of the ACUB program.

Volunteer of the Year award was presented to Larry Hale. Hale is always the first to sign up when volunteer opportunities arise – from highway trash pick-ups, to helping plant trees and wildflowers, to photographing wildlife on outings and events. He communicates the Land Trust’s mission to others across the region, and continuously advocates for conservation of our natural resources. Hale, along with his wife Jennie, accepted the award.

Everette “Sonny” Helms was named Sportsman of the Year. Helms is a conservation easement donor who owns land in Cabarrus County on Coddle Creek Reservoir, protected by Three Rivers Land Trust in 2018.

Helms has opened his property to school groups who have learned much about hunting and fishing from him and experiencing the outdoors on his land. Sonny is a member of the Sportsman’s Access Program and continues to be an advocate for TRLT among the hunting and conservation community.

The Leopold Society School of the Year was Garinger High School. Garinger High School’s Outdoors Club was established in 2019 and invites students in ninth through 12th grades to learn about the natural world and conservation through hands-on activities.

Led by Aaron Silverman, students participated in a conservation day on a conserved property near Coddle Creek Reservoir in October 2019. Students learned about native wildlife and wetland ecology, then got their hands dirty by building their own primitive fishing poles and wood duck boxes to place around the property.

The Uwharrie Chapter was awarded the County Chapter of the Year. Chapter members have expanded the Land Trust’s visibility and membership base to increase awareness of the Land Trust’s conservation work in our region.

This past year, the Uwharrie Chapter hosted the inaugural Uwharrie Trail Half Hike, which offered hikers a chance to travel 20 miles of the historic Uwharrie trail over a two-day period. The Half Hike was a huge success, with over 70 participants.

The Uwharrie Chapter also hosted the Jazz on the Rails event in Southern Pines in partnership with Aberdeen Carolina & Western Railway. This  event melded a look at historic preservation on the 1920s restored train cars, jazz music and local foods for participants from all over North Carolina.

The Deborah Walker Conservation Government Employee of the Year award went to Nancy Guthrie with the N.C. Clean Water Management Trust Fund (CWMTF). Gurthrie has worked with TRLT staff on dozens of important conservation projects over the years, and was especially instrumental in transitioning the Sandhills Area Land Trust ongoing CMWTF projects to TRLT staff to manage and close. Guthrie is also a Uwharrie Trail Thru Hiker, having completed the 40-mile trek during the annual backpacking trip in 2018.

To learn more about how you can support Three Rivers Land Trust, contact Michael Nye Fulk at 704-647-0302 or michael@threeriverslandtrust.org.