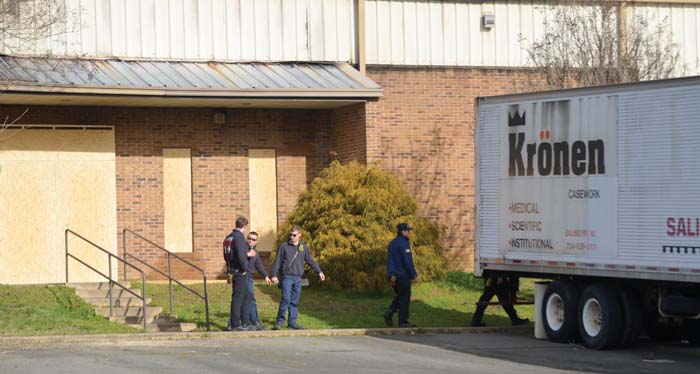 Salisbury Firefighter returned to the site of an early Sunday morning fire at Salisbury Millwork, located on Corporate Circle, off Julian Road. The son of longtime Rowan County Commissioner J. Newton Cohen was arrested and charged with burning the property and breaking into the building. Thomas Cohen was issued a $75,000 secured bond and has since been released from the county jail. Shavonne Walker/Salisubury Post

SALISBURY — A day after Salisbury businessman Thomas Miller Cohen was charged and accused of setting fire to a local business, Salisbury fire investigators say they are continuing to look into what may have been used to set fire to the site of Salisbury Millwork.

Cohen, 60, of the 2000 block of Webb Road, was charged on Sunday with felony breaking and entering, felony burning other buildings, and felony larceny after breaking and entering. Salisbury Police brought the charges against Cohen hours after the fire but haven’t said what led them to identify Cohen.

Police Capt. Melonie Thompson said there were several vehicles in the parking lot with broken windows and body damage.

Arrest warrants say Cohen stole a “computer CPU” valued at $1,000 that belonged to Bobby Clay Lindsay Jr. and “did willfully and maliciously burn a building within the curtilage of another.”

The fire was set sometime around 2:26 a.m. and discovered at 3:12 a.m., according to police reports and fire personnel.

Salisbury Fire Marshal Terry Smith said the fire was intentionally set but they are working to determine what was used to set it. The fire began in what was the tool room located behind a front office, Smith said.

County tax records show the building, located at 823 Corporate Circle, is owned by Clear Choice Investments. Bobby Clay Lindsay Jr., who owns Salisbury Millwork, occupies a suite in the front portion of the building that is next to Virginia Air.

Firefighters were able to contain the fire to just Salisbury Millwork. There were several other fire departments that responded. No injuries were reported and the fire was extinguished within about two hours.

Cohen is expected to make a first appearance in court today.