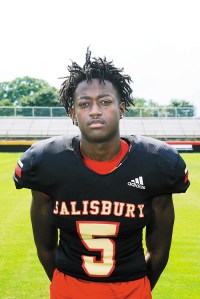 Corpening.Donavan SAL 5. photo by Wayne Hinshaw, for the Salisbury Post 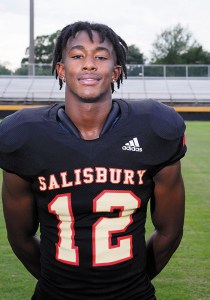 Norman.Jabril SAL 12 photo by Wayne Hinshaw, for the Salisbury Post

SALISBURY — Teammates on a Salisbury defense that put the Hornets back on the football map statewide, linebacker Jabril Norman and defensive back Donavan Corpening now will go their separate ways.

But they’ll both be in the Division II South Atlantic Conference.

Norman, a tenacious linebacker who was defensive player of the year in Rowan County and the Central Carolina Conference, is a prize recruit for the Mars Hill Lions.

Corpening, a late-blooming cornerback, will stay home and suit up for the Catawba Indians.

Both were instrumental in Salisbury’s runner-up finish to Shelby in 2AA. Salisbury’s defense allowed one TD in the first six games of the 2019 season, a terrific run. The Hornets also produced a ferocious finish, stifling some potent offenses in the first four rounds of the state playoffs.

“Donavan is a mama’s boy, and he’d be the first one to tell you that,” said Salisbury coach Brian Hinson, a star offensive lineman for Catawba in his playing days. “It was a great situation for Donavan to go to Catawba once they got everything worked out. As far as Jabril, Catawba didn’t do anything wrong recruiting him. I wasn’t like Catawba didn’t do everything they could do. But he wanted to start from scratch. He wanted something new. He wanted to get out of Salisbury and go have some different experiences.”

Norman and Corpening were part of a rebuilding effort at Salisbury that saw the Hornets rise from 3-8 when they were freshmen to 13-3. Both join programs with work to do to compete for championships. Mars Hill was 5-6 in 2019 and the Lion’s most recent SAC title was in 2011. Catawba took the league championship as recently as 2015 and won nine games in 2017, but the Indians sank to 1-10 and eight straight SAC defeats during an injury-riddled 2019 season.

So there should be opportunities for both Hornets to help their new teams early.

Catawba head coach Curtis Walker saw plenty of Corpening and Norman over the last two seasons because his son Jalon, a sophomore linebacker who already has a stack of Division I offers, is their teammate.

Norman’s first college offer came from Catawba during the spring of his junior year. It was an offer he always cherished and appreciated, but it was an offer that was his fallback option.

Offers also trickled in from Limestone, Wingate and Elizabeth City State, to name a few. Mars Hill offered Norman a week before Christmas.

“I did want to go somewhere new for college,” Norman said. “It was a tough decision. It really all came down to Mars Hill and Quincy University.”

Quincy isn’t a school people are familiar with because it’s in Illinois. It’s a Division II program. The head coach is Gary Bass, the former Catawba center who has close ties to Hinson, not only from Catawba but from their coaching days together at East Rowan High.

Norman announced a verbal commitment to Mars Hill on Jan. 31.

“Mars Hill and Quincy both wanted me to make a decision as Signing Day was getting closer,” Norman said. “Both had one linebacker spot left. I decided on Mars Hill. Their linebackers coach (Luke Goodwin) has been recruiting me a long time, calling me for about a year. I know him and I trust him, but the biggest thing with choosing Mars Hill instead of Quincy was distance. Mars Hill is close enough that my family and friends can still watch me play.”

Norman turned in a tremendous senior season, with 102 tackles and 53 assists. He had 18 tackles for loss. He forced six fumbles and recovered three. Against Mount Pleasant in the first round of the playoffs he was so destructive that MP coach Michael Johns said he was the best player the Tigers faced all season. In the second round of the playoffs, Norman’s fumble return touchdown against Washington got a road win rolling.

“Jabril was huge for our team and our defense,” Hinson said. “He helped turn the school’s program around, got us to the state championship game. He’s worked extremely hard. I can brag all day about his work ethic. I’ve had a lot of special kids with great work ethics, and that’s going way back to Ben DeCelle at East Rowan, but Jabril’s is the best I’ve ever seen.”

He said on Thursday he’s accepted an invitation to play in this summer’s East-West All-Star Game in Greensboro. That’s the ideal way to cap his high school football career.

“A lot of strange things happened during this football season, starting with the North Rowan game getting moved to Salisbury, so we got to beat them at home my senior year,” Norman said. Then we get sent to the East for the state playoffs, but we end up in the state championship game. Strange things, but all blessings.”

Norman, who plans a business major, is currently playing for a good Salisbury basketball team. He doesn’t score a lot, but he’s an athletic rebounder and defender.

“He helps us a lot,” head coach Bryan Withers said. “I know he wants to play more and I’d like to play him more, but every time he plays, I’m nervous. His future is football, and the last thing I want is for him to get hurt on a basketball court.”

“I was on him a lot, and there were days when I didn’t know if he’d come back,” Withers said. “But I saw something there, and so I pushed him. Kids, they’ll hate you for a while, but then their eyes open up and they start seeing that you were doing it all for them, and they start to understand. Donavan came a long way.”

Withers said Corpening always had confidence. That’s essential for a DB, especially a cornerback, the position Corpening figures to play at Catawba.

Hinson wasn’t all that high on Corpening’s chances of making an impact when he first met him late in Corpening freshman year, but Corpening was starting to show his potential as a sophomore.

Corpening made himself better one day at a time with footwork drills and the steady grind of the weight room. He’s still not big at 170, but it’s a long and strong 170. He has nice height for a corner. He’s listed at 6 feet, but he might be closer to 6-1.

“It took me a while to see the athlete that he is,” Hinson said. “But we started to realize that not many teams were challenging him, so he must be pretty good. He got stronger each year was physical enough this year to really help us against the run game. He improved more than any player on our team as a senior. He can be a good player in the SAC.”

Corpening was All-Rowan County and All-Central Carolina Conference and impressed the Indians.

“Catawba liked my length and my size and also my work ethic,” Corpening said.

While teams didn’t attack him all that much, Corpening made four interceptions. In the victory against Lexington, he had a pick and a forced fumble. He had an interception at Oak Grove and made two interceptions in the playoffs. He had a terrific game against Randleman as the Hornets dominated the regional final with their defense. Corpening’s stock rose weekly during the Hornets’ playoff run.

Catawba’s offer gave him a chance to play college football while sticking close to his family. That was important to him.

“Catawba is upgrading a lot of things,” Corpening said. “There are a whole lot of advantages to going to Catawba.”

Corpening plans to study computer science. That’s a degree that should open doors for him long after football ends.

“For Jabril and Donavan signing means great opportunity,” Hinson said. “They can take this opportunity and make it life-changing.”