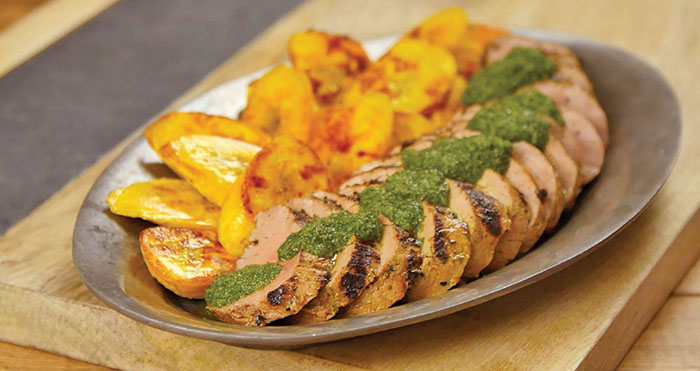 American Heart Association Grilled pork tenderloin that has been marinated in a mojo, is served with grilled or baked plantains.

While we’re thinking about hearts — having just celebrated Valentine’s Day — let’s talk about heart healthy, because February is American Heart month, along with everything else.

Holidays are over, New Year’s resolutions are a failure, what can we do to make it through the rest of the winter and come out smiling in the spring?

Your resolution to eat better was probably too vague, or you went overboard with bland rice cakes and water.

Let’s try some sensible eating that does no harm.

First, let’s take a look at what’s in your pantry, fridge and freezer, and how you can improve on that. These are suggestions from the American Heart Association’s web site:

Keep these items in your cabinets

• Whole grain pasta, such as brown rice or whole wheat, as well as couscous and quinoa (which is really a grain);

• Nuts and seeds, almonds, walnuts, peanuts, as well as nut butters, and seeds such as sunflower, pumpkin, flax and chia;

• Dried herbs and spices and pepper that can be freshly ground.

For your refrigerator and freezer:

• Low-fat dairy, such as yogurt, milk and cheese;

• Frozen meats, such as fish filets and skinless chicken breasts;

• Soft margarine, with no trans fat — read the label carefully.

This basic recipe for whole wheat muffins can be changed by adding different ingredients.

Fold in add-ins of your choice, being careful not to over-mix the batter. Divide evenly between muffin tins. Bake 25-30 minutes.

• 1 cup mashed banana, instead of applesauce, plus 1 cup chopped walnuts.

Or let your imagination come up with other combos, like dried apricots and slivered almonds.

You can splurge and still be kind to your heart, with a Cuban recipe using traditional ingredients cooked with less fat.

In the bowl of a food processor, add peeled garlic, chopped scallions, cilantro, orange juice, lemon juice, lime juice, cumin and oregano. Process until all the ingredients are puréed, about 1 minute. Add pork tenderloin into a shallow dish along with marinade. Marinate anywhere from 2 to 24 hours.

To cook, preheat the oven to 450 degrees for the plantains and prepare the grill to medium-high heat for the pork tenderloin.

Trim the ends off each plantain; cut a slit down the middle of each peel and use your hands to remove the peel. Cut the plantains into 1/2-inch thick diagonal slices. Add plantain slices into a bowl with 1 1/2 Tbsp. oil, 1/4 tsp. salt, and 1/8 tsp. pepper. Stir to combine.

Cover 1 large baking sheet or 2 smaller ones with foil and coat with cooking spray. Add plantain slices into one even layer. Bake in the center of the oven for 15 minutes. Carefully remove the baking sheet and use a spatula to flip each plantain over.

Cook another 10 to 15 minutes later until plantains are crisp and caramelized on the outer edges; keep an eye on the plantains as they cook to prevent from burning.

Meanwhile, remove the pork tenderloin from the marinade, discarding the marinade and wiping the majority of it off the pork. Season with 1/4 tsp. salt and 1/8 tsp. pepper. Brush remaining 1 1/2 tsp. oil onto the pork and place on the grill. Cook 15 to 20 minutes, turning every few minutes, until the thickest part of the pork reaches an internal temperature of 145 degrees. Transfer to a plate and let rest at least 5 minutes. Slice and serve with the plantains.

The dish can be cooked in the oven. After wiping marinade off the meat, heat 2 tsp. canola oil in a large saute pan over high heat. Add pork and cook on each side until golden brown, about 5 minutes. Transfer the pork to a baking sheet and place in a 450-degree oven with the plains. Cook until a meat thermometer reads 145 degrees, 15-20 minutes.

Place a box grater into a large bowl and grate enough zucchini for 5 cups.

In a small bowl, add the dressing ingredients: dried oregano, black pepper, vinegar, and oil. Whisk together with a fork. Pour dressing onto the salad and use a spatula or tongs to toss to combine together.

Serve and sprinkle feta cheese on top of each salad portion.

Cook, covered with foil or lid 1 hour and 40 minutes, stirring after 40 minutes, and continue cooking, covered, until rice is tender and liquid is absorbed. Stir in the black-eyed peas and season to taste.

In a medium bowl, add the raspberries, blueberries, apples, sugar, cinnamon, lemon zest and lemon juice. Stir to mix evenly, then add cornstarch and stir until cornstarch dissolves. Set aside

Divide the berry mixture evenly among the prepared dishes. Pour the topping over each. Arrange the ramekins on a large baking pan and place in oven.

Bake until the berries are tender and the topping is golden brown, about 30 minutes. Serve warm.