Braves’ Markakis: Everyone on Astros `deserves a beating’ 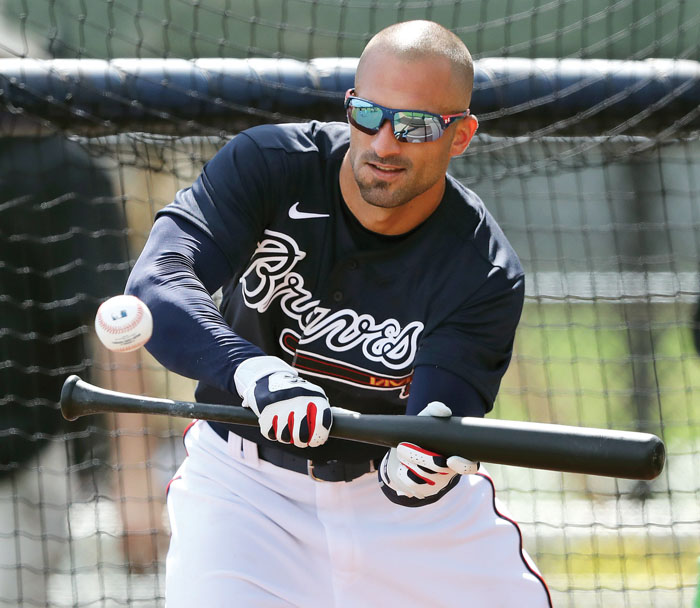 “I feel every single guy over there deserves a beating,” he said Tuesday.

“I think the commissioner completely handled it the wrong way. But that’s the way he did it and we got to live with that. I know a lot of people disagreed with the way he handled this decision,” Markakis said. “He should be embarrassed of himself.”

As the Braves began their first full-squad workout, Markakis became the latest major leaguer to take aim at the Astros in the wake of their sign-stealing scandal.

“I ain’t commenting on everybody’s comments. Go ahead. You want to beat on us, go ahead,” new Astros manager Dusty Baker said. “I didn’t think Markakis talked too much.”

When told Markakis doesn’t, Baker said, “OK, maybe he had his Wheaties.”

The Braves and Astros play twice in spring training. Houston closes the regular season at Atlanta in late September.

Manfred suspended Houston manager AJ Hinch and general manager Jeff Luhnow for one season for the team’s actions in using video to steal catcher’s signs in 2017 and 2018, and the pair were fired by Astros owner Jim Crane. Manfred fined the Astros $5 million and stripped them of their next two first- and second-round draft picks.

Players were not disciplined and their 2017 World Series title remained intact.

Dozens of big leaguers have criticized the penalties as being too lax, including Los Angeles Angels star Mike Trout, NL MVP Cody Bellinger and Dodgers teammate Josh Turner, and All-Star pitchers Yu Darvish of the Cubs and Trevor Bauer of the Reds.

“It angers you, especially from a guy who played the game the right way his whole career,” said the 36-year-old Markakis, a 14-season big league veteran. “No short cuts. I know how hard it is to prepare for this game. To see something like that, it’s damaging to baseball.”

“I know we’re all competitors. We’re out to compete, but there are right ways to do it and wrong ways to do it,” he said. “I 100% disagree the way with the way they did it. A lot of people were hurt by it. Everything has been handled the wrong way.”

“You got two guys sitting at home, kind of getting a little leeway but they’re out of the game right now,” he said of Hinch and Luhnow. “Then you got the players who did it who are scot-free. I know there’s a lot of political stuff behind it but it’s wrong. You don’t want to see that.”

“As players, we do not agree with what they did or don’t stand behind them or support them, their actions,” he said. “I think they got off pretty easy. They’re going to be able to go out and compete with no ramifications at all.”

WEST PALM BEACH, Fla. (AP) — Players who have won a World Series — and those who have come up short — seethed Monday at Commissioner Rob Manfred’s reference to the sport’s championship trophy as merely a “piece of metal,” saying that comment reflected a disconnect between baseball’s boss and those who produce the product on the field.

“It bothered me, man. I hated it. It made him sound really out of touch,” said reliever Sean Doolittle, a member of the 2019 title-winning Washington Nationals. “That’s the holy grail of our sport. That’s what we show up for in the beginning of February, thinking about and working towards.”

Added Doolittle: “I just can’t believe how out of touch that is. You’re the commissioner of our game. You’re the steward of this game. That’s a really special thing. It’s an iconic symbol of our game. Please don’t say that, even off-hand, even tongue-in-cheek.”

As with so many things being talked about around the majors as spring training gets started, this all stems from the Houston Astros’ sign-stealing scam in 2017 and 2018.

There have been calls for players involved to be punished in some way; MLB gave them immunity in exchange for cooperating with the investigation.

Some think the Astros should be stripped of their 2017 championship, but Manfred said this on Sunday in an interview with ESPN: “The idea of an asterisk or asking for a piece of metal back seems like a futile act.”

That phrasing did not sit well.

Doolittle and other players noted that the official name of the hardware itself is The Commissioner’s Trophy.

“For him to devalue it the way he did yesterday just tells me how out of touch he is with the players in this game. At this point, the only thing devaluing that trophy is that it says ‘commissioner’ on it,” said Justin Turner, whose Los Angeles Dodgers lost to the Astros in the 2017 Series.

“It’s pretty obvious what everyone thinks should happen. I mean, no one in this clubhouse or in this room is asking for a trophy to be handed us, by any means. ... But at the same time, we understand how difficult it is to win a World Series. It’s hard. It’s really hard. And it’s something that you have to earn,” Turner said at LA’s camp in Glendale, Arizona. “It’s pretty evident to me that it wasn’t earned and it’s not something that a banner should be hung in their stadium (or) a trophy should be put up wherever their trophies go.”

Like Turner, Evan Longoria has been to a World Series but not won one.

“Well, there’s a couple of pieces of metal, right? You get a ring, too. That’s a big piece of metal,” Longoria said Monday after the San Francisco Giants’ first full-squad workout in Scottsdale, Arizona. “I think everybody that plays the game knows it’s not just a ‘piece of metal.’ It’s the blood, sweat and tears that go into the, whatever, 175 games or whatever it is that it takes to win a World Series.”

The sacrifices. I don’t know if he said that to make a funny or what, but it’s obviously representative of something much bigger than that.”

Joe Musgrove, currently with the Pittsburgh Pirates, pitched for the 2017 Astros and said he gets others’ frustration with Manfred’s comments.

“They don’t just hand those out; there’s a lot of work that goes into getting one of those. So I can understand why they’re upset about it,” Musgrove said in Bradenton, Florida. “For me, personally, I think the ring is something that everyone takes with them and that’s a special piece you can carry with you forever. There’s only one trophy that gets made. That might be more important to the manager than anybody. But at the end of the season, as a team, getting to hold that thing up is pretty special. I understand where their frustration comes in.”

Doolittle spoke Monday about the feeling of first holding the trophy Washington won by beating Houston in Game 7 in October.

“There were tears, man. … It’s hard to put into words what it is like to actually hold that trophy above your head for the first time,” Doolittle said. “We saw how much that ‘piece of metal’ meant to the fans, going up and down the streets of D.C. We all know what it means to guys who have spent their whole career in the league, grinding, and they finally got to hold that thing.”

Manfred gets to take another swing at the topic when he holds a news conference in Arizona on Tuesday.