Planning Board working to modify solar farm conditional use requirements 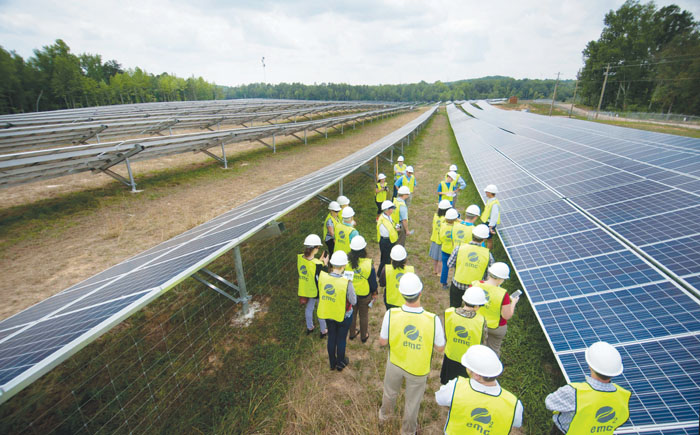 SALISBURY — While Rowan County maintains a six-month moratorium for new or expanded solar farms, a subcommittee of the Rowan County Planning Board has been meeting to gather information, evaluate and change standards for permits.

Ed Muire, Rowan County Planning Department director, said the subcommittee has been hearing from solar industry experts and others for different perspectives as they work to draft new text for the planning board.

The new text, still in working form, is intended to improve the standards for which future solar farm applicants would follow. The process is generalized for various types of facilities, but the modified text would provide more specific requirements for solar farms, said Assistant Planning Director Shane Stewart.

The text initially included only standards for setbacks and the proximity to the airport zone overlay, in addition to hazardous safety standards. But the new text looks to address outdoor storage, height of facilities and classification of different types of solar farms based on size.

Rowan County commissioners placed a moratorium on new ground-mounted solar farms in the county on Oct. 7, the same day that developers from Cooperative Solar LLC withdrew their plans for a 428-acre, 65-megawatt solar farm called China Grove Solar. The solar farm would have been located along Neel Road, Sherrills Ford Road and Old Bradshaw Road, and would have provided an estimated $70 million investment, according to the developers. Harry Welch was the primary owner of the land through a limited liability corporation called Big Harry LLC.

Though the moratorium wouldn’t have applied to the China Grove Solar application, the developers withdrew plans in a letter that said the board of commissioners “through their questions, wasn’t ready to issue the CUP for the project.”

The land that would have been primarily used for the farm was zoned rural agriculture, which was one concern among citizens and commissioners at a packed meeting in September, when Cooperative Solar presented its plans to the board. Another concern was the visibility of the panels, which prompted developers to state in the letter that solar farms are one of the least intensive uses in rural areas and the proposed buffers would have shielded the project completely from neighbors.

Another concern from the commissioners was abandonment of the project, Stewart said, which the new text intends to address.

The subcommittee will meet to make a recommendation for the text and then present it to the full Planning Board. After a courtesy hearing involving the public and solar experts who want to weigh in, the modified text would be presented to the commissioners. Ultimately, Stewart said the goal is to be reflective of citizens’ input as well as what the commissioners want.