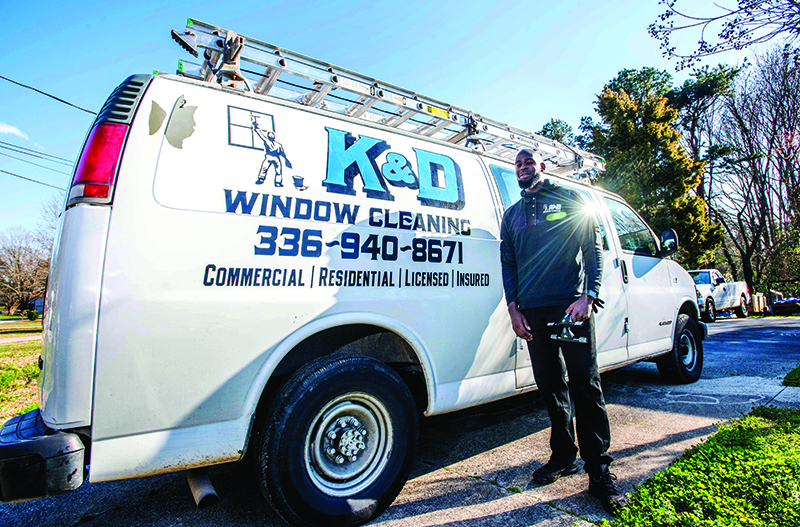 SALISBURY — Armored with a white t-shirt, khaki pants and “a handful of ambition,” Demetrius Burns launched his own window cleaning business, K&D Window Cleaning, in 2016.

The 32-year-old moved from Fayetteville to Salisbury in 2005 to attend Livingstone College. He graduated with a degree in business administration and was in and out of jobs before landing at Freightliner Trucking. After a few years, Burns was laid off.

“I had a heavy weight on my shoulders to get some income for my family,” he said.

So with his back against the wall, and his last $20, he turned to YouTube to see what he could do to start his own business. He came across Keith Kalfas, a social media landscaping and window washing influencer, who suggested a trip to Lowe’s for a sponge, squeegee and bucket.

From there, Burns said he went door-to-door and store-to-store to sell his services professionally.

K&D Window Cleaning also offers gutter cleaning and pressure washing services for both residential and commercial buildings. Burns is optimistic about opening a storefront in the next few years to consult with customers and discuss why his services are important. Gutter cleaning, which he said should be done at least twice a year, is important in preventing foundation and roof damage on property.

“K&D” stands for “Keionna and Demetrius.” Keionna is his fiancee, and she helps Burns coordinate his schedule and appointments.

Burns said he received a call from Freighliner but ultimately decided not to return because he wants to invest all his efforts into his business.

And he aims to maintain a competitive nature and keep a mentality that someone else can always come along and potentially do the job better.

Burns said when he works in his office at home, his son, Demetrius Burns Jr., looks over his shoulders. Both Jr., 6, and Shania, 8, have seen their father in action during the summer.

“That was a challenge. We didn’t have daycare going on. They didn’t have summer camps,” Burns said, adding that he told them, “Daddy has to go out and make some money for you guys. You guys are gonna watch Dad.”

But the experience served as a way to bond and set an example for his children to see their father do things for himself.

Until the middle of 2017, Burns took all the jobs on by himself. But after business picked up in 2018, he hired two other employees to help him.

Some of his clients, he said, have included the the Rowan County Library Headquarters and the owner of Pottery 101.

“What I realized is that if you practice something and you feel like you can do it,” he said, “go out there and do it.”