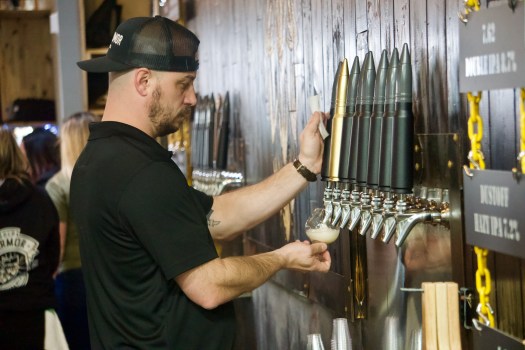 Carl Blankenship/Salisbury Post –Old Armor Co-owner Kyle Lingafelt working behind the bar at the Grand Opening on Saturday. Lingafelt is a retired Marine Corps captain and the other owners are veterans as well. 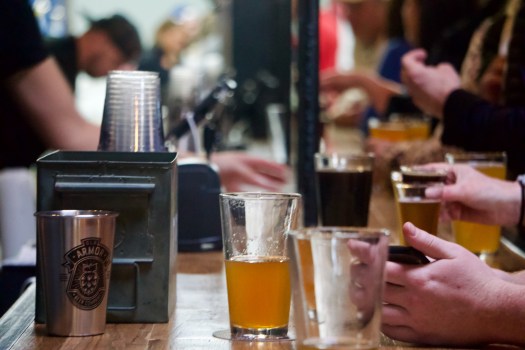 Salisbury Post file photo - Old Armor's bar during its opening weekend and prior to the COVID-19 outbreak.

In his wildest dreams, Co-owner Stefan Perrine said he was not expecting the amount of business that has come to the brewery now that they’ve become the first to open in Kannapolis’ still-revitalizing downtown. The business has brewed a couple thousand gallons of beer since it opened in December just to keep up.

Perrine is expecting even more business as the weather warms, the Kannapolis Cannon Ballers’ new stadium opens and more businesses come to the revitalized downtown area. Old Armor is in a unique position as the first building to open in Kannapolis’ downtown as part of its revitalization project. The baseball team’s office and store is now open as well on West Avenue.

Immediately next door to the brewery, there is an apartment building to be built. All through downtown, construction is continuing on space for restaurants, offices and a parking deck set to be complete in 2021. The city purchased its downtown for the revitalization hoping to bring more than $370 million in investments to the city once it is finished and has set about making that vision a reality.

The grand opening at Old Armor this weekend packed the tasting room, with lines stacking up at the bar full of people trying to get a taste of the brews. Doug McCormick premiered his new song “Earnhardt,” named for Kannapolis icon Dale Earnhardt on Friday, and there was live music all weekend. Food trucks have been posted outside the brewery’s doors, ready to serve local brew enthusiasts each day.

The brewery also had ceremonial unveilings of two new beers, cherry porter on Friday and an orange cream ale on Saturday.

Co-owner Kyle Lingafelt, a retired Marine Corps captain, said the grand opening went “tremendously” and the brewery already had strong community support after the grand opening. The event was timed so the business would have the chance to work some kinks out beforehand. It’s is the trio’s first brewery, and they sought out advice from others craft brewing outfits before opening.

“Mistakes that are made by others, we wanted to learn from those. So, we tried our best to do that and at the same time we said hey, ‘how can we be creative, how can we be unique,'” Lingafelt said.

Lingafelt said being part of the revitalization in Kannapolis is part of that, and being the first 100% veteran-owned brewery in the Charlotte metropolitan area is something of which they are proud.

“Yesterday (Friday) was just such a showing of support from the community that came in and today its already been really well received as well,” Lingafelt said on Saturday.

The three owners, all veterans, have been learning as they go.

The building, which was built in 1941, needed massive renovations that included rerunning plumbing and wiring. Rather than growing into it, said Perrine, a retired Army staff sergeant, the company opened a relatively large business.

Even though some of the early kinks have been worked out, Perrine said every day is still a challenge.

The only time you feel relaxed is when you’re going home and you hope nothing goes wrong while you’re not there,” Perrine said, adding the staff is working together better and the brewery has hired more employees to keep up.

The military theme permeates the entire business. The tap handles look like tank shells, the hop bud in the logo looks like a bomb that would be dropped out of a military plane and a number of the in-house brews have military references for names like “Oh Dark Thirty,” “Blonde Bombshell” and “MOAB Ale.” There are a pair of IPAs on tap, with the single “5.56” making a jump in caliber to the double “7.62” IPA.

The best seller is the blonde ale, a beer Perrine said is a good entry for people into the craft beer world. Perrine said “7.62” is also doing well. The beer company has more than two dozen beers on tap and all but two were their own at the grand opening. Boondocks Brewing is a West Jefferson brewery that helped out Old Armor when it first opened and is often on guest taps. Sometimes the brewery will feature beers from other breweries as well.

Going into the spring and summer Perrine, who is also one of the brewers, is experimenting with popular warm-weather flavors like fruits and is not brewing more cold months beers. The brewery is creating lighter brews that may be enjoyed at a baseball game and has been dabbling with different flavors in short runs.

There is also a chalk board behind the board that says “pay it forward,” with tallies of beers bought for veterans of each branch of the military, police and first responders by folks in the tasting room. The board can get competitive as well. One day, the Army was leading the Marine Corps, leading to some comments from Perrine that the Army supports the troops more.

“I went up there and bought like 10 beers and put it on the board and said ‘I guess not,'” Lingafelt said.

Perrine never found out Lingafelt put his thumb on the scale.

The theme goes beyond the imagery, beer names and some free brews. On. Feb. 22, the brewery will hold a release party for its “Redline Ale.” Proceeds from sales of that beer will be donated to the nonprofit Firefighters’ Burned Children Fund. The brewery plans to support a cause through beer sales each month.