From soccer to football, Jeter signs with South Carolina 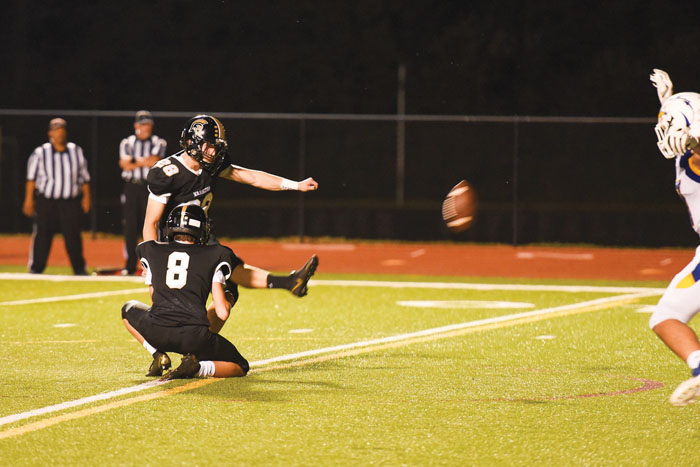 Photo courtesy of Rob Walley Photography ... Cabarrus Warriors' kicker Mitch Jeter (28), kicks a field goal during a game against Southlake Christian, last Oct. 4, at Cannon School in Concord. The holder is Todd Pelino (8). Jeter resides in Salisbury and recently signed to continue his education and football career at the University of South Carolina.

SALISBURY — Just a little over two years ago, Salisbury resident Mitch Jeter’s goal was to earn a soccer scholarship at a Division I university.

Now a senior at Cannon School in Concord, Jeter recently signed that Division I full-ride offer. But Jeter is not going to play “futbol,” like he had dreamed. He’ll play that other football, as a kicker at the University of South Carolina. This fall, he’ll be in the Southeastern Conference, where 80,000-plus rabid fans pack stadiums every Saturday.

And it all started in October 2017, when Jeter and one of his best friends, Blake Clark, decided to go “play around” with a football at Catawba College’s Shuford Stadium, one Sunday after watching a Carolina Panthers game.

“I made a 40-yarder (field goal) that day, and I think Blake said something like, ‘dude, you should be kicking for your school,'” recalled Jeter.

Cannon combines with Concord First Assembly to have enough players for a football team. Going by the name, Cabarrus Warriors, the team is coached by former Panthers’ fullback Brad Hoover. It was the middle of the season, but Jeter, then a sophomore, asked Hoover if he could join the team. The answer was yes and Jeter’s football career began, although modestly, at first.

“I was kicking on my own for about six months, with very little coaching,” said Jeter. “I was still playing soccer, primarily. But when I got with a kicking coach, it all changed.”

Jeter contracted with Dan Orner Kicking and Punting in Charlotte. Orner kicked at North Carolina in 2002-03, making 70 percent of field goals and 61-of-62 extra points for the Tar Heels. In addition to his business, Orner instructs at camps at UNC, Maryland, South Carolina, Virginia, Virginia Tech, Appalachian State, among others, and is the lead evaluator of kickers and punters for Team USA Football. He works with numerous high school, college and NFL kickers.

“My junior year, when I started working with a Dan Orner, a light went on for me that ‘hey, I can do this,'” Jeter remembers. “He recommended me for a big camp in Atlanta. I got nationally-ranked right away and that was eye-opening, because I was so new to it. Coach Orner said: ‘This is your thing. You’ve got to keep going after it. You have talent in this.'”

So Jeter kept practicing and “going after it.” He had a full junior season for the Cabarrus Warriors and started going to college camps and by April 2019, received a preferred walk-on offer from Virginia Tech.

His outstanding senior season for the Warriors did the trick. Jeter’s kickoffs were sailing out of the end zone and he kicked field goals, including head-turning boots from 57 and 55 yards. He was also the punter for his team and it certainly didn’t hurt that 247 Sports, a recruiting website, ranked Jeter 12th in the nation for kicking.

“The 57-yard field goal did get some people’s attention, but I think, more than anything, it was just staying consistent,” said Jeter. “The short ones matter just as much as the long ones — they’re all good for three points. That kick helped a little bit, for sure, but I wasn’t out there thinking, ‘I really need to make this to get an offer.’ I was thinking, ‘this what I do, so just go do it.'”

Jeter eventually did pick up full scholarship offers from Furman, East Carolina and the one from the Gamecocks. He picked South Carolina, even though his parents, Andrew and Stacy Jeter, met at ECU. Andrew, a doctor of chiropractic in Salisbury, was a varsity swimmer for the Pirates. Mitch plans to major in either biological or exercise sciences at USC, in order to go into the medical field, like his father.

“I felt a good connection with the coaches at South Carolina and playing in the SEC will be awesome as well,” said Mitch. “The coaches, the facilities, and obviously, a great atmosphere. Playing in front of that many people will be one heck of a challenge, but I’ve always been one to challenge myself. I felt that South Carolina would do that for me — push me to be the best that I can be.”

Jeter said that by signing in February, he is actually part of South Carolina’s 2021 recruiting class. The Gamecocks had signed its 2020 class in November, but no matter, Jeter will have his scholarship when he enrolls in August.

The Gamecocks return senior kicker Parker White, whose 24-yard field goal in overtime stunned No. 3 Georgia, in Athens, last Oct. 12. Jeter will learn from and compete with White and, if he doesn’t see action, could red-shirt for a season.

Having made it through the recruiting process and with a football scholarship secured, Jeter looks back fondly at his first love. “Obviously, I had played soccer my whole life and that was my passion and that was my goal, to play college soccer,” he said. “But soccer led me to football and I’m grateful for that.”

And Clark, his friend, who graduated from Salisbury High and is now a freshman at UNC, no doubt was rooting for Jeter to end up in Chapel Hill. “I’m sure he was and Blake still says, ‘hey, I gave you your start,'” chuckled Jeter.