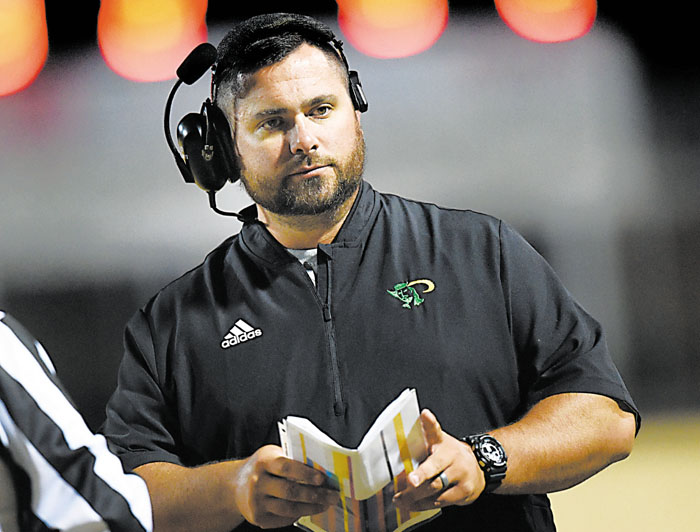 North Rowan football coach Ben Hampton, during a game against West Montgomery on Oct. 25, 2018. Hampton, coach at North since 2015, has been linked to a job opening at Socastee High School in Myrtle Beach, S.C. ... File photo by Wayne Hinshaw/for the Salisbury Post

MyHorryNews.com, which covers Horry County in South Carolina and is the website for the Horry Independent newspaper,  has published a report that Hampton is the top candidate to be the head football coach for Socastee High School in Myrtle Beach.

The report cites a number of sources “with knowledge of the impending hires” when saying Socastee intends to present Hampton’s name to the Horry County Board of Education for approval. Hampton’s name will be sent to board members during Monday evening’s regularly scheduled district meeting, the newspaper reported.

On Friday, neither Hampton nor North Rowan athletic director Mark Woody responded to messages from the Post.

Hampton, a Rowan County native who starred as a running back at West Rowan, has been the Cavaliers’ head coach since 2015. North is 42-21 during those seasons, but 37-14 since a 5-7 mark in Hampton’s first year in Spencer.

North won a Central Carolina Conference championship under Hampton in 2016, going 5-0 in league play and 11-3 overall. The Cavs reached the third round of the state 2A playoffs that year.

Hampton also served as North Rowan’s athletic director for four years, before turning those duties over to Woody in 2019.

Hampton was a standout in baseball and football at West Rowan, before graduating in 2002. He was part of David Bennett’s first recruiting class for Coastal Carolina University’s new football program. Bennett had been at Catawba College for the seven seasons (1995-2001), building a nationally-ranked Division II program.

Coastal, located in Conway, South Carolina, did not play games until the 2003 season. Hampton played in the Chanticleers’ first-ever contest — a 21-14 win over Newberry. He went on to score six career touchdowns at Coastal, seeing action in 35 games, before graduating.

Hampton immediately went into coaching back home in Rowan County, working as an assistant in football and baseball at Carson.

Hampton’s sister, Hillary, is married to West Rowan head football coach Joe Nixon. The two met as students at Catawba, where Hillary played basketball and Nixon was an offensive lineman on the football team.

Ben Hampton and his wife, Catherine, have two young children.

The article in MyHorryNews.com stated that “Horry County Schools spokeswoman Lisa Bourcier confirmed that both schools (Socastee and Loris) plan to finalize their hires at Monday’s meeting.”