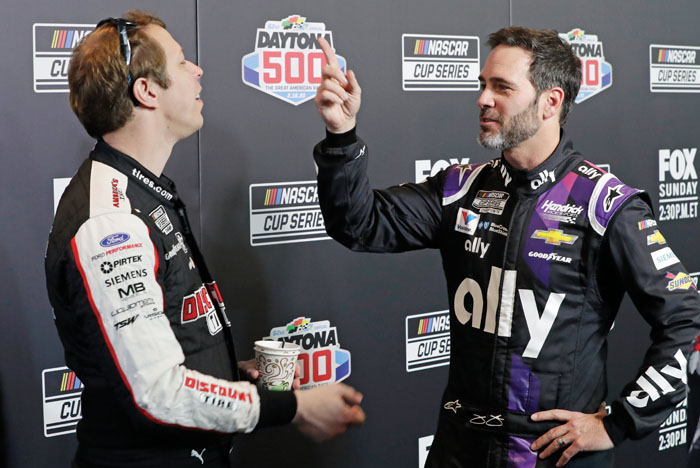 DAYTONA BEACH, Fla (AP) — The last chance to appreciate Jimmie Johnson leading the field at the Daytona 500 may come during the pace laps.

Shortly after President Donald Trump gives drivers the command to start their engines, Johnson will zip ahead of the other 39 cars and take a ceremonial trip around the track up front during the warm-up lap. Daytona International Speedway will honor the seven-time NASCAR champion with a tribute video on the track’s big screen that will celebrate his greatest accomplishments.

Johnson will then fall in line and start sixth Sunday, the two-time Daytona 500 champion still as respected as any driver in NASCAR — but far from the serious threat he once was to contend for the victory.

For those who know Johnson best, his drive to finish his final full season in NASCAR in championship style can’t be beat.

“I’ve never seen Jimmie so energized,” team owner Rick Hendrick said Saturday. “Sometimes a guy in his last year, they’re celebrating, it’s the end. I don’t want to say they coast, but it’s not a priority to run fast and win. Jimmie is really fired up.”

Johnson took a moment before practice Saturday to shake hands with Richard Petty, the only other living seven-time NASCAR champion. Johnson seemed poised to pass Petty and Dale Earnhardt atop the record book when he won his seventh title in 2016. Sure, the winner of 83 career Cup races would love to close his full-time career with a record eighth title, but the 44-year-old Californian is trying to enjoy his final ride.

Johnson says he’s doing nothing more than “retire” from 38 NASCAR weekends a year and intends to shift into other forms of motorsports. He hasn’t ruled out a limited NASCAR schedule, and has been hesitant to commit that Sunday is, in fact, his final Daytona 500.

But the weekend sure is being treated like his “Great American Race” finale.

Besides the pace lap drive in the No. 48 Chevrolet, fans can relive Johnson’s two Daytona 500 wins (2006, 2013) at a three-panel kiosk located in the infield. His Hendrick Motorsports teammates and his rivals taped testimonials to Johnson that will be played at the race. His car sponsor stationed 48 flags along a sidewalk across from Daytona International Speedway.

“We’re going to give him everything we got,” Hendrick said.

Johnson stopped by an IndyCar test this week in Texas to catch a glimpse of his next potential racing pit stop.

“The (Indy) 500 has passed for me,” Johnson said. “I haven’t had enough conversations to figure everything out. But road course racing for me looks like a good proposition.”

Johnson won three times in 2017, but his June 4 victory at Dover stands as the last on his list. He had the first winless season of his Cup career in 2018 and followed it with another 0-fer in 2019, a tumultuous season that included two crew chiefs. Johnson led 131 laps last season and only 40 in 2018, a precipitous drop from his dominant days when he led more than a 1,000 laps in eight straight seasons (2007-2014).

Going out on top may be a long shot, but going out in 2020 on his own terms is what matters most. He’ll have no shortage of career options, and just might have more time for his wife and two young daughters.

“I don’t know what it’s like to be bored,” Johnson said. “What is that? What would that look and feel like? I hope to get to that point at some time next year. Bored? That’s just not me. It’s not been me. I’ll probably hate it and bury myself with more work in another way.”

It was the third consecutive win at Daytona for a car fielded by Dale Earnhardt Jr., his sister and Rick Hendrick in what they consider a family business.

“It never gets old, man,” Earnhardt Jr. said. “I don’t expect I will do it ever again as a driver, but if I get here as an owner and have success like this, it’s a great feeling.”

Gragson and Chase Briscoe swapped the lead in the closing three-lap sprint to the finish, but NASCAR threw the yellow-flag for a multi-car crash on the final lap.

Harrison Burton and Timmy Hill, who will make his Daytona 500 debut on Sunday, were second and third in Toyotas. Briscoe was fourth in a Ford for Stewart-Haas Racing.

Gragson celebrated old-school style, first by climbing the fence at Daytona International Speedway — a nod to both three-time Indianapolis 500 winner Helio Castroneves and recent NASCAR Hall of Famer Tony Stewart. Then Gragson fueled the flames on the Daytona track surface created by his celebratory burnout.

He ran up and down the frontstretch pumping his fists in celebration, then slid across the hood of his JRM entry for the drive to victory lane.

“It’s Daytona, you never know if you get this chance again, so do what you want to do,” Dale Earnhardt Jr. said.

Gragson is the seventh different race winner for JRM.