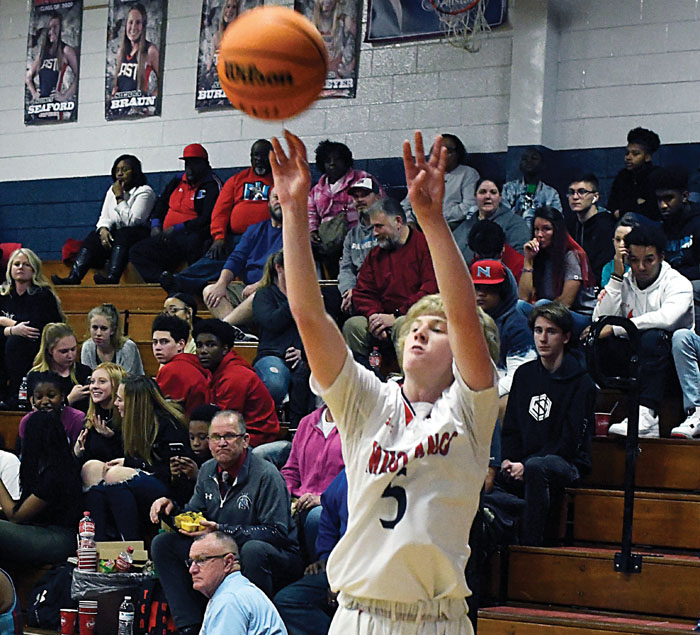 GRANITE QUARRY — East Rowan’s boys deserved to finally get a win on Friday.

It was an inspired effort, a tenacious effort, a hot-shooting effort, but visiting North Iredell proved to be a little too tall and a little too strong.

“We can be upset about losing and about missing shots, but this was positive,” said East assistant Mark Lambert, who has guided the team the last two games. “Probably the best effort we’ve had all season. No one can question the effort.”

East  has lost 13 straight and hasn’t won since stunning North Rowan in the Christmas tournament, but instead of throwing in the towel, the Mustangs are throwing up even more 3-pointers. They lost Jake Hunter, their biggest guy and their leading scorer, to a stress fracture in January. They’ve played recent games with experienced guard David Jordan on the shelf.

But they showed up on Friday with a plan and went out and executed. Offensively, the goal was to launch at least 30 3-point attempts.

“That’s the way we have to play,” Lambert said. “We don’t have a lot of guys who can create their own shot, but we’ve got guys who can catch and shoot.”

Defensively, the objective was to limit Jackson Hawkins, the North Iredell star who burned the Mustangs for 32 points when the teams met in Olin. North Iredell (10-14, 5-5) won that one, 72-65.

“We kept the ball out of Hawkins’ hands,” Lambert said. “He’s a really good player. We did a good job defending  him.”

East (2-22, 0-10) certainly did. The problems turned out to be North Iredell guard John Jackson Jr. (18 points), 6-6 freshman Beckham Tharpe (12 points, big fourth quarter) and broad-shouldered Jayden Turner, who is listed at 6-4, 253, but appears to be larger than that. Turner, who scored 21, looked like he had 75 pounds on East’s wiry Cameron Padgett, the only healthy player East has who is over 6 feet tall.

East bombers Dylan Valley (career-high 25 points) and Gavin Sprinkle (18 points, his biggest game since November) were on from the start. East took a 17-11 lead after a quarter. Confidence grew. East would lead by as many as a dozen, but North Iredell didn’t panic, even when it looked like the Mustangs might never miss another shot.

By halftime, the Mustangs led 38-29 and owned one of the most bizarre stat sheets of all-time. Their 38 points had come on one field goal, zero free throws and 12 3-pointers. Valley, a freshman with no fear and a quick release, had six 3s. Sprinkle, a junior, made five. Tristan Miller, called up recently to the varsity, had the other one.

Sometimes it’s not rocket science. North Iredell knew it had to take away the 3-point line in the second half, had to turn East’s shooters into dribblers, and did so.  The Raiders also hit the glass even harder. As the stick-backs increased, the Mustangs’ lead dwindled.

There was a roar from North Iredell fans when the visitors finally caught up at 47-all with 1:45 left in the third quarter. A bruising three-point play by Turner put the Raiders in front, 50-49, 37 seconds later.

Still, East wasn’t done. The fourth quarter was packed with thrills, but only one East 3-pointer. Sprinkle made that one for a 59-55 East lead, but with 2:44 left it was 59-all.

East’s last lead came on a pair of Vincent Jones free throws for a 63-61 edge with 2:21 left, but Turner and Tharpe banged relentlessly inside.

East moved the ball, stayed patient, but there wasn’t much there.  With time running out, Valley, who had made eight 3-pointers and one free throw for his 25,  had to launch from in front of the East bench, with two taller North Iredell in great defensive position. Together, they volleyball-blocked the shot cleanly, as Valley tumbled to the deck. East fans were sure there was contact, not with hands and arms, but with bodies, but there was no whistle.

“I couldn’t even see the rim, but I had try to let it fly,” Valley said. “I did think they could have called a foul, but you can’t expect to get that call.”

North Iredell tacked on one more free throw — and escaped.

East, which has only one senior on the roster (Connor Wilson), left the gym with pride. The crowd could have asked for a better result, but not a better game.

“We hustled,” Valley said. “That was the best all-round effort we’ve had all year, but their big guys hurt us.”

“Their size was the difference,” he said. “We fought, but we just couldn’t keep them off the boards.”

In the NPC tournament on Tuesday, No. 6 East will play at No. 3 seed South Iredell. No. 4 North Iredell will host No. 5 Carson.