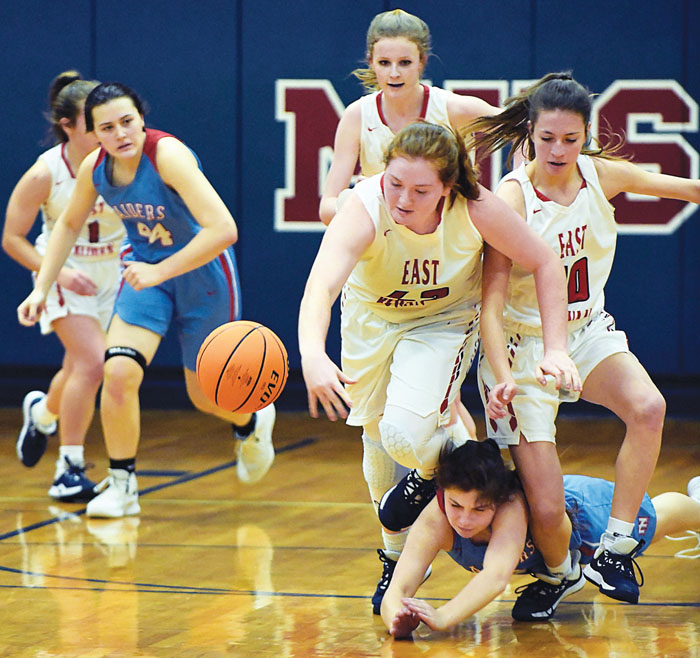 GRANITE QUARRY — The three seniors for East Rowan’s girls basketball team — Adalie Harrison, Grace Eagle and Caroline Houpe — left the floor together in the fourth quarter, with yet another victory well in hand.

They’d all played well. A large crowd offered an ovation.

“I hugged Coach (Kevin Holland), and it was just a very special moment for me,” Eagle said. “He’s helped me improve so much. He’s always been there for us through anything and everything. We’re lucky. We’ve got a really great coach.”

When Holland was a rookie head coach and Harrison and Houpe were freshmen, East was 4-20 and finished 10th in a 10-team league. A year later, when Eagle joined them on the varsity, they were 5-20.

But they’ve come a long way since then. Those three seniors helped hold the program together until a wave of young talent arrived.

East’s 64-24 Senior Night romp over North Iredell on Friday made the Mustangs 19-5, and they’re going to be around for a while.

“Every senior group is special, but this group was my first group,” Holland said. “They came in with me. They’ve been through a lot. They kept on working when we were down to five or six healthy players, and they got to see us reach the point now where we’re pretty good.  This was the fifth or sixth time this year we’ve had a crowd like this, and I’m glad  we were able to get them out of the game together and let fans cheer for them. I hope they felt it and I hope they’ll remember it. I was an assistant coach on some state-champion teams in Raleigh, and we didn’t have crowds like this.”

Harrison led East in the North Piedmont Conference game with 14 points, taking care of the 1,000 milestone early and finishing her night with 1,012. Houpe scored 11, as did freshman Leah Hinceman. Mary Spry had nine. Eagle had eight. Haley Dalton scored seven.

“We had balance as we usually do,” Holland said.

Eagle fed Spry for a 2-0 lead. A steal and pass ahead by Dalton led to Harrison’s milestone bucket and got fans energized. After a brief pause to celebrate, Eagle got a friendly bounce on a 3-pointer from the left side. East quickly stretched its lead to 11-0.

But North Iredell scored the last six points of the first quarter, as Holland asked his team out loud, “What are we doing?”

“We play so well in stretches,” Holland said. “We lock down on defense and we can cause teams problems. We get out and run and we do a great job of looking for each other. But then we’ll have those stretches where we get stagnant, where we can’t score. If we could just play all the time like we played at the start and in the second quarter, we’d be tough to beat.”

East put together a powerful second quarter, mauling the outmanned visitors, 21-1, for a 32-7 halftime lead. East’s bigs can run the floor. Hinceman had eight in the quarter. Harrison’s seven in the period included a banked-in 3-pointer that had her smiling sheepishly.

The highlight of the second half was Houpe, who is headed to Division II Concord in West Virginia. She got hot. She swished a 3-pointer late in the third quarter. That got her going. She made a flurry of  smooth jumpers in the fourth, as East’s lead snowballed.

Holland let the seniors play longer than he would have on a normal night, but no one blamed him. This was their time . They earned those extra minutes with years of sweat.

After a Houpe jumper made it 59-22, it was the right moment to get all three seniors to the bench together.

There were hugs and happy faces. After some hard times, 19 wins is something to smile about.

“I felt good tonight — the shot felt good,” Houpe said. “When the three of us were coming out of the game and people were cheering, I was about to cry, but I held it together.”

East (19-5, 7-3) tied West for second place in the NPC, two games behind Carson. East and West split. West won a league game against Carson while East didn’t, so the Falcons are seeded No. 2 for the NPC tournament.

As the No. 3 seed for the tournament, East plays No. 6 North Iredell at home on Tuesday in the first round. If East beats North Iredell again, it will play West Rowan in a semifinal at Carson on Thursday at 6 p.m. The winner of that game will be the NPC’s No. 2 seed for the 3A state playoffs. The loser won’t get an automatic bid, but will still make the playoffs as an at-large team.

See Sunday’s edition for a story on Harrison and her career.