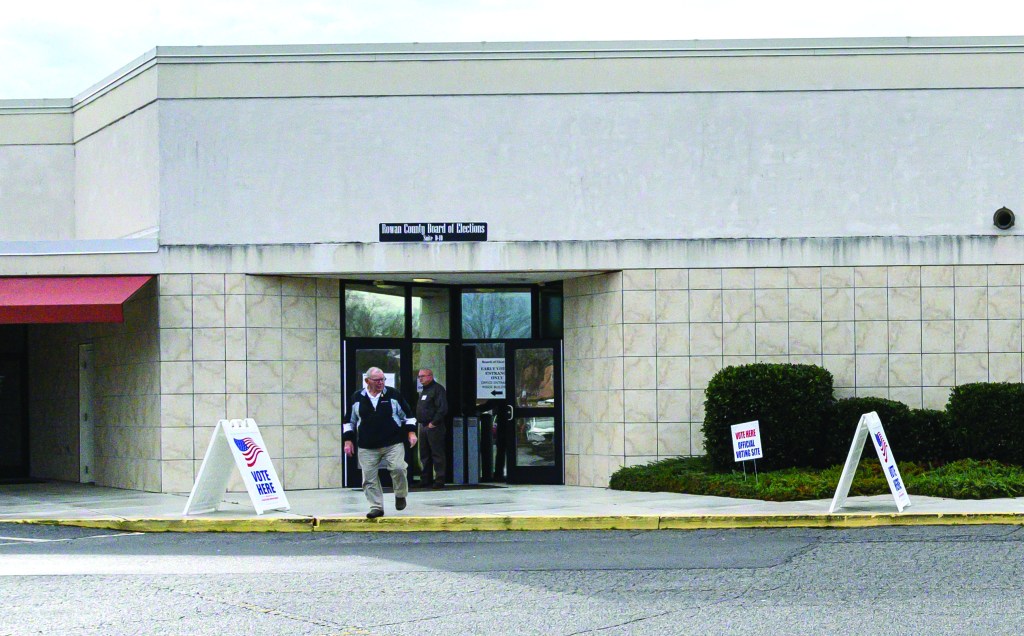 SALISBURY — With rain coming down Thursday on the first day of early voting for the primary, an estimated 323 people cast ballots.

That’s compared to 657 people who did the same on the first day of early voting in the 2016 primary. The Rowan County Board of Elections, Rockwell American Legion Building and South Rowan Public Library are the three locations designated as early voting sites, with choices on the ballot ranging from president to county commissioner and a $45 million bond referendum. According to Elections Director Brenda McCubbins, there was a smooth start to early voting.

Judy Gessinger took advantage of the China Grove library site to do some research before filling out her ballot. She was interested in candidates who had military experience and would be good for North Carolina.

She said she voted in favor of the $45 million Rowan-Cabarrus Community College bond because people need to get a good education for the county to continue thriving.

Kathy and Mike Austin voted early at the library in case they were busy taking care of their grandchildren on Election Day.

Candidates who had “Christian principals” got Austin’s vote.

He said he showed his photo ID, though the requirement to show identification was eliminated via court ruling ahead of the primary. Austin said he thinks it should be a requirement to vote.

Steven Corder, of Kannapolis, works at precinct no. 2 — Blackwelder Park — on Election Day. Corder said he often is worried Election Day will be too busy that he won’t have the time to vote. He was driving by the library and saw it as an opportunity to cast his ballot.

Corder said he is retired from military and values voting. While serving, Corder wasn’t always able to vote. He has since voted in every election.

“I strongly believe that a vote does more to ensure our freedom than a nuclear weapon,” Corder said.

Corder said the economy was his biggest issue. Corder said he doesn’t see enough conversations about how printing more money lowers the value of the dollar. He also said he wants the rich to be fairly taxed and that he is a strong believer in the law, especially when it comes to illegal entry into the country. Though, Corder said he thinks the process to enter the county should be faster.

Melanie Miller voted early at the Rowan County Board of Elections. As a retired teacher and with a son, with health problems, her top issues were education, health care and the environment. Voting is a way to have a voice on matters from the local to federal government, she said.

Norma Honeycutt voted early and commented on the numerous choices, admitting she was at a loss in some races.

“Being a citizen of the United States, it’s your civic duty to vote,” Honeycutt said.

Editor’s note: This article was updated at 3:12 p.m. on Feb. 14 to correct a statement by Melaine Miller, whose son has health problems. She previously was misquoted. We apologize for the error.