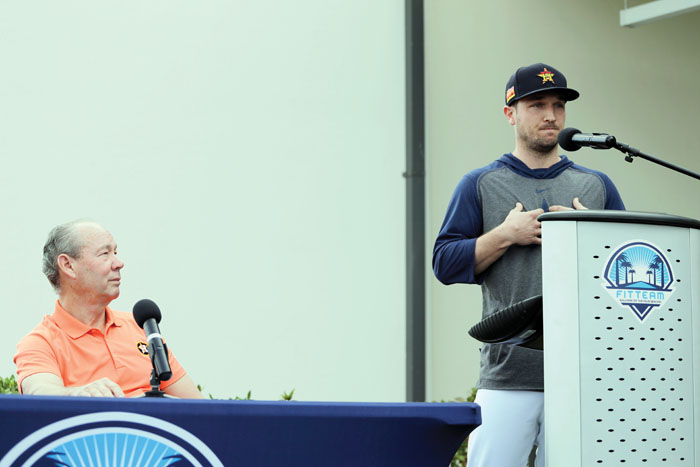 On a patch of grass between the Houston Astros’ spring training building and fields, under a sun obscured by clouds, the star third baseman stepped to a microphone at a news conference, becoming the first player Thursday to apologize —– without really discussing with any detail—– for the sign-stealing scheme from the club’s 2017 World Series championship season.

“I am really sorry about the choices that were made by my team, by the organization and by me. I have learned from this and I hope to regain the trust of baseball fans,” Bregman began, before thanking Astros fans and saying he and his teammates “are totally focused on moving forward to the 2020 season.”

And thus the script was set.

The most eyebrow-raising statement came soon thereafter, when Astros owner Jim Crane replied to a question from a reporter by saying: “Our opinion is that this didn’t impact the game. We had a good team. We won the World Series. And we’ll leave it at that.”

Baseball Commissioner Rob Manfred disciplined the Astros after he found the team broke rules by using electronics to steal signs during 2017 and 2018. The investigation found the Astros used the video feed from a center field camera to view and decode opposing catchers’ signs. Players banged on a trash can to signal to batters what was coming, believing it would improve chances of getting a hit.

Manager AJ Hinch and GM Jeff Luhnow were given one-year suspensions by Manfred; Crane then quickly fired both. MLB did not punish any players for the cheating and Crane said he stood by that.

“We’re not going to do anything to the players,” he said.

Crane and players denied that Astros hitters used buzzers to get information about pitches.

The owner repeatedly pointed to MLB’s report instead of directly answering questions and vowed: “This will never happen again on my watch.”

A day earlier, the Astros gathered at their facility, barring media from the grounds, and it was apparent that they mostly agreed on a unified message.

The talking points became clear Thursday before the first official workout of the spring as, one by one, the faces of the franchise spoke to the media in the clubhouse: Bregman, second baseman José Altuve, shortstop Carlos Correa, outfielder Josh Reddick, pitchers Justin Verlander and Lance McCullers.

The Astros share a Florida complex with the team they lost to in last year’s World Series, the Washington Nationals, and this time, it was the runners-up that drew a lot more attention than the champs as both teams’ camps opened.

“In the long run, some of their actions will speak louder than words and being sorry that you got caught and being sorry for what you did are two different things. It’s not going to go away in one day. This is going to be an ongoing process, unfortunately,” Nationals reliever Sean Doolittle said. “This is something that all of baseball has to reckon with, and we’re all still trying to come to grips with it and process it. So it might take a bit.”

Bregman’s clubhouse session lasted 10 minutes and he stuck to his message. So, generally, did the others.

Bregman, for example, used words like “apologizing” and “remorse,” but made no mention of “signs” or “stealing” or “cheating.”

Some, such as Verlander, said they wished they had “said more” at the time to dissuade the use of the illegal system that helped batters know what pitches were coming from opposing pitchers.

Like Crane, they refrained from offering any sort of apologies to teams or players they had beaten in 2017, specifically the New York Yankees in the AL championship series and the Los Angeles Dodgers in the World Series.

“I don’t think we feel the need to reach out to those guys,” Reddick said, “or anybody for that matter.”

When asked, inevitably, whether their 2017 title was tainted, they tended to use a variation of, “People have their own opinions,” as Correa did.

Much like Crane and Hinch’s replacement as manager, Dusty Baker, insisted earlier Thursday, the players kept — more hopefully, perhaps, than realistically — insisting they were going to talk about this for one day and then focus on the new season to come.

The most forthcoming and sincere-sounding statements came from Correa, who said the system was not as effective in the postseason because opposing catchers were using multiple signs to tell their pitchers what to throw.

“We feel bad and we don’t want to be remembered as the team that cheated to get a championship,” Correa said.

“What we did in ‘17 was wrong. … It’s not how we want to be remembered,” Correa said. “I’m going to be honest with you: When we first started doing it, it almost felt like it was an advantage. … But it was definitely wrong. It was definitely wrong and we should have stopped it at the time.”

WEST PALM BEACH, Fla. (AP) — Max Scherzer grunted and cursed his way to 56 pitches during his first formal bullpen session of spring training — about 20 more throws than other Washington Nationals starters Thursday, but “standard” for him, the righty said — and then was asked about … the Houston Astros’ cheating scandal.

Manager Dave Martinez began camp in the last season for which his contract is guaranteed at the moment — the Nationals hold an option for 2021 — and then was prompted to talk about, well, another team entirely.

Nationals players could look around their clubhouse at the Ballpark of the Palm Beaches and see the new locker nameplates or new red-and-blue clocks on the walls or patches stitched to the sleeves of their new jerseys, all festooned with some sort of logo proclaiming the club to be the 2019 World Series champions … and then were queried about the club that was the runner-up last season.

It was an odd dynamic: The Nationals and Astros were foes last October; Dusty Baker, hired to replace the fired AJ Hinch as Houston’s skipper, was Martinez’s predecessor in Washington; the teams share a complex in Florida; they will open their Grapefruit League schedule against each other on Feb. 22.

And so Martinez jutted his thumb over his right shoulder, in the direction of Houston’s half of the facility, when he said, “I don’t focus on none of that stuff.”

If it takes a lot to render the reigning champs’ first official workout of the spring a non-story, well, Houston managed to do just that.

The Astros were punished by Major League Baseball for a sign-stealing scheme that an investigation determined was used during their 2017 run to the title and in 2018, too. They addressed the matter during a news conference  that included their owner, Jim Crane, on Thursday, and two players; other players spoke in the team’s clubhouse.

“One day of having to answer questions is not going to make this go away,” said Nationals reliever Sean Doolittle, who also spoke about the effect Houston’s cheating had on pitchers who fared poorly against the Astros. “This is going to be something that they’re going to have to work really hard at to show baseball, to show other players, to show fans, that they are remorseful and they do want to move on from this.”

One current Nationals player was on the Astros team that engaged in the sign-stealing: Will Harris, a reliever who switched teams as a free agent this offseason.

“I was on that team. I take responsibility for it just like every other man that was in there,” Harris said. “I’m not going to try to separate myself in any way.”