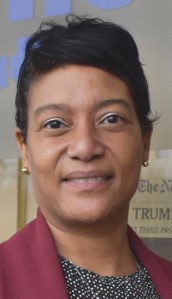 SALISBURY — Tarsha Ellis got her passion for politics at a young age.

Her mother, Willie Mae Burnon Ellis, had that passion too. Her late mother helped at polls and assisted people in registering to vote at her East Spencer home.

Ellis, who now lives in the Franklin community, never thought about becoming a politician. Then, she received a call from Kevin Taylor, the Stanly County Democratic Party chair asking her to run. She thought about it for several days, and decided to file on the last day for N.C. Senate District 33, a seat currently held by Sen. Carl Ford.

Ellis, running as a Democrat, said her mother would be very proud to see her run for office.

“Our voice has been dampened over the last couple of election cycles,” Ellis said. “We took back the (U.S.) House in ’18, but we really need folks to stand up for the party, because I do really think we stand for the people.”

She faces Rowan County Democratic Party Chair Geoffrey Hoy, who lives in Salisbury, in the primary.

Ellis said she is not running “just to put a name on the ballot and hope for the best” but to represent the people of Rowan and Stanly County.

She attended North Carolina School of Science and Math in Durham for high school and says it had a huge impact on her life.

“That experience that I had in high school was amazing,” Ellis said. “Can we have a North Carolina School of Science and Math around every corner? No. But we can invest back into our schools.”

Ellis, who has bought supplies to donate to schools, said “we clearly have issues” if a school can’t afford to buy toilet paper. Teachers need a good, living wage as they are sculpting the minds of the future, she said.

When attracting companies to Rowan and Stanly counties, both of which are contained entirely by the 33rd District, decision makers should ensure those jobs will pay a decent wage to its employees, she said.

“You can create a job that pays minimum wage, but we’ve all seen that doesn’t help ends meet at all,” Ellis said.

Ellis said the health care system is “badly broken” and that the country is putting a band-aid on a bigger problem.

“It blows my mind that people have to make choices between a prescription drug or do I buy groceries,” Ellis said. “Do I get my insulin or do I make the rent?”

Ellis said North Carolina should be the 38th state to expand Medicaid.

If elected, Ellis said, she will focus on learning issues that are important to citizens, bringing those issues to General Assembly and voting on bills that benefit the district and not her own agenda.

“I see it in a lot of the politicians that serve me supposedly,” Ellis said. “You see a personal agenda instead of representing the people. They’re put there to represent their constituents not themselves.”

Ellis said she sees divisiveness in the General Assembly. She says it’s time for the discord to “fall by the wayside” and begin working together to get things accomplished.

“It’s what you’re elected to do,” Ellis said. “You’re elected to represent your constituents and your job is to work with your counter parts to get things done. I don’t understand why that’s a difficult concept, so we should be working together.”