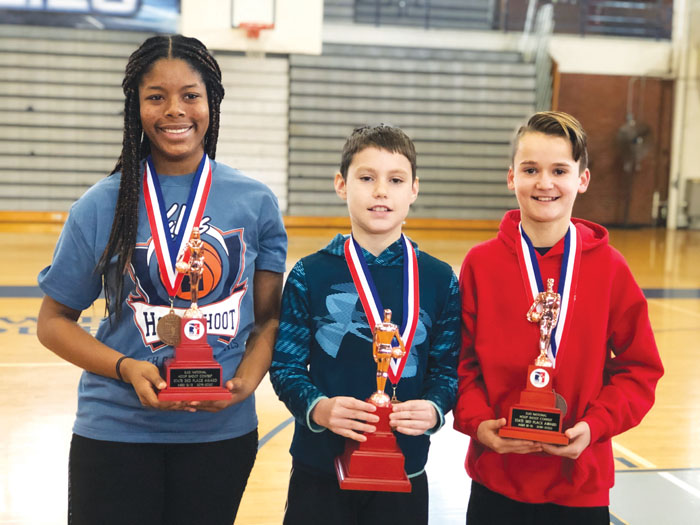 Each of the local youth faced tough competition at the event, but fought some challenges to finish in third place. Elder competed in the girls 12-13 division, while Davis battled in the boys 10-11 group and Spence was in the boys 12-13 category.

“These youth are very talented, competitive, and each one came to win,” said Liz
Tennent, local Hoop Shoot Coordinator for Salisbury Elks Lodge #699. “Unfortunately, some days you don’t have your A-game. That happens in sports, even to professional players.”

Tennent was impressed with how the trio never gave up or got discouraged.

“Sehr, Dasia and Bryant were just as focused on their first free-throw as they were on the last one,” added Tennent. “Even when shots rimmed out of the basket or bounced off the backboard, they showed a lot of determination, heart and sportsmanship. Their families, our local lodge and I are very proud of what they achieved — third place in the state is fantastic!”

The annual Elks Hoop Shoot event is a best of 25 free-throw contest for boys and girls from ages 8-13 years old.

Meanwhile, Davis, made 18-of-25 free throws during regulation. He was tied with another player and found himself in a double shoot-out for third place. He drilled the last 4-of-5 shots to earn his trophy.

Elder, the oldest member of the Salisbury trio, has participated in the Elks Hoop Shoot contest since 2017. She has won trophies at each of the local,
district and state levels. Now 13, this was Elder’s last competition.

“I love basketball and being part of the hoop shoot,” said Elder. “It gave me a chance to really focus on one part of my basketball game (free throws).”

Elder, a member of the basketball team at North Rowan Middle School, sank 17-of-25 free throws during Saturday’s competition.

“My skills have improved, and I’ve won a few trophies,” Elder added. “But, most of all, I’ve had a lot of fun and met great people.”

According to Tennent, all three players have promised to return to the local Hoop Shoot next January — Spence and Davis as participants and Elder as a volunteer assistant.