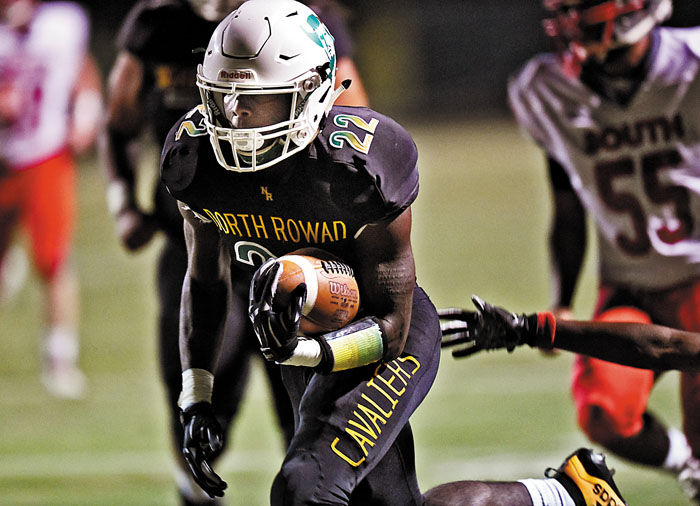 SPENCER — Atticus Hampton is at that precious age between 2 and 3, and he couldn’t wait to get down on the field on Friday nights after North Rowan football games.

“Oh no, not to see his daddy,” said North head football coach Ben Hampton. “But to see Malcolm.”

Malcolm is Malcolm Wilson Jr., the celebrated North running back who reached an important life milestone on Wednesday, trading in Cavalier green and gold for the bold blue of the Barton College Bulldogs.

Barton is a new Division II football program in Wilson, N.C. It once was known as Atlantic Christian College and had a significant rivalry with Catawba in basketball and baseball, among other sports.

“Barton is not too big and not too small,” Wilson explained. “And you’ve got a head coach there (former Catawba head coach Chip Hester) who is a great guy and who knows where I come from. He’s recruiting some special players.”

It was almost a testimonial dinner for Wilson, rather than a standard signing party.

Wilson is part of North’s basketball team, but the Cavaliers don’t have a game the rest of this week, so teammates from both sports were able to attend the festivities. About a dozen people, including teammates Kendall Reid, Jordan Goodine and Zay Davis, sang Wilson’s praises in the media center.

The 5-foot-10, 185-pound Wilson is far from a star for North basketball as a defensive-minded guard, but he handles that job with grace, tenacity and a positive attitude, making the most of every minute on the floor. He has no problem being a role player who helps taller teammates shine.

“We were excited when he decided to play basketball, because of the person that he is,” North hoops coach Jason Causby said. “He makes us a better team. He finds ways to make us better every day.”

As a sophomore, Wilson was North’s No. 2 running back, albeit a talented No. 2 who rushed for 523 yards and put the ball in the end zone 11 times.

He came back for his junior year quite a bit bigger and stronger and transformed into a virtual superhero.

“What I’ll remember about his junior year is that he lost his dad (39-year-old Malcolm Lamar Wilson Sr.) during the season,” Hampton said. “I don’t think I could’ve handled losing my dad. I can’t imagine how devastating that was for him, but he never missed a  beat. He came out there to represent his father on Friday nights.”

He etched his name in the Rowan record books as one of a handful of players to score six touchdowns in a game and as the only one ever to score seven TDs in a game.

With 31 touchdowns and nine 2-point conversions he scored 204 points as a senior — the first 200-point season in North history. The Cavaliers have been playing football since 1958.

Wilson isn’t super-fast, but he has good speed. For backs, burst — accelerating to the hole — is even more important than a 40-yard dash time, and Wilson’s burst is strong. He has exceptional balance and solid instincts, immediately recognizing where he needs to go. He’s a sure-handed receiver. He’s tough enough to get yards after contact and elusive enough to make the first tackler miss.

“He led us,” Hampton said. “On the field and off the field, Malcolm led us. He’s quiet and you might not even know he’s in the locker room, but when it’s time to strap it on, when it’s time to go to work, he’ll always be the first in line. Malcolm has a gentle heart and a gentle soul, but he’s one hell of a football player. I’m so proud I got to coach him.”

Despite all the accolades, all the yards, all the touchdowns and all the glowing character references, the recruiting roller coaster wasn’t a routine ride for Wilson.

“A very tough, confusing process, but I learned a whole lot from it,” Wilson said. “Hopefully, the day will come when my son is being recruited. I’ll be able to help him out.”

Barton got involved late in the game.

“The last two months, I could see the angst and the tension because Malcolm didn’t know what was coming next, didn’t know where he was going to be,” Hampton said. “I must have made 500 phone calls and I sent emails to every coach I knew. When I called Coach Hester, he couldn’t believe Malcolm hadn’t committed anywhere yet. I told him he was still looking for a home.”

Barton’s impressive facilities were a selling point for Wilson, as was the fact Barton has yet to play its first game. The Class of 2020 is Hester’s second recruiting class, but Barton will make its much anticipated debut on the field at home on Sept. 5 against Newberry.

Barton isn’t a South Atlantic Conference member, but already has a scheduling agreement with SAC schools, including a trip to Catawba that will draw a lot of interest.

“What better way for any football player to start his college career than by helping to start a program,” said Hampton, who was part of the same scenario when Coastal Carolina played its first football season in 2003.