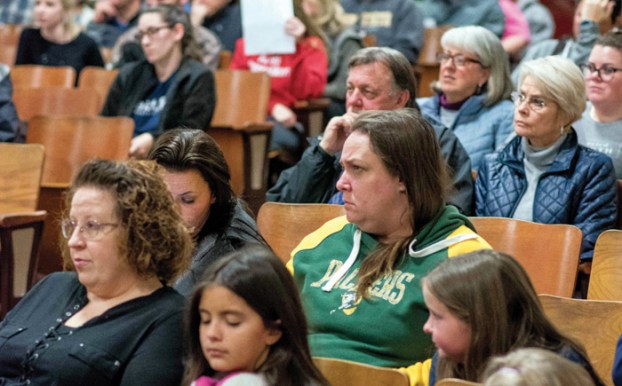 Editorial: Stop board from ‘crying wolf’ about closures

As children, many of us learned some version of Aesop’s fable about the boy who cried wolf.

The story goes that a boy watching the village’s sheep cried out “Wolf! Wolf! The wolf is chasing the sheep” to amuse himself. Villagers came running, but, of course, there was no wolf. The boy laughed and the villagers angrily grumbled back down the hill.

He did it a second time and the villagers had the same response, running to help then scolding him for lying.

When he saw a real wolf, he cried out a third time, but the villagers did not come because they thought he was trying to fool them. At sunset, villagers went to check on the boy because he had not returned with the sheep and they found him crying because the flock had scattered.

Some similar version of the same cannot play out in Rowan County. The villagers — parents, students, teachers and family members — cannot be complacent the third time their schools enter closure conversations or the school board will respond by scattering students without appropriate input.

Three years ago, the school board considered a proposal to shutter a series of schools, including Faith and Enochville elementaries. The Rowan County villagers spoke out against the proposal, and the board backed off. The same occurred last year, too.

Now, the board is again talking about shuttering Faith and Enochville, though they haven’t officially decided to pursue closure. The next step could be asking for a closure plan and scheduling a public hearing. The school board has moved with haste before on closures only to back off after community opposition. There’s no reason to believe this time would be any different.

But the Rowan County villagers cannot simply scold the school board the third time around, saying “don’t close our community schools.”

Closures of schools must happen because of a declining student population and aging facilities. Only a few years ago, the school district’s population hovered around 20,000. Now, the population is somewhere between 18,500 and 18,700.

Locals should approach the school board with a compromise, which looks like its working in the case of Knox Middle and Overton Elementary. The school board at Knox and Overton is moving forward with designing a K-8 school that would combine the two facilities. In Faith or Enochville, the board easily could make renovations to an existing facility to suit students of the closed school.

If a community group for Faith or Enochville — the parent-teacher association for example — offers a palatable compromise for the school board, maybe its members will stop “crying wolf” about closures.

Editorial: Next decade will be about coal ash action in Dukeville area

In Rowan County, most major concerns ended years ago about water contamination and  how Duke Energy would handle the tons... read more