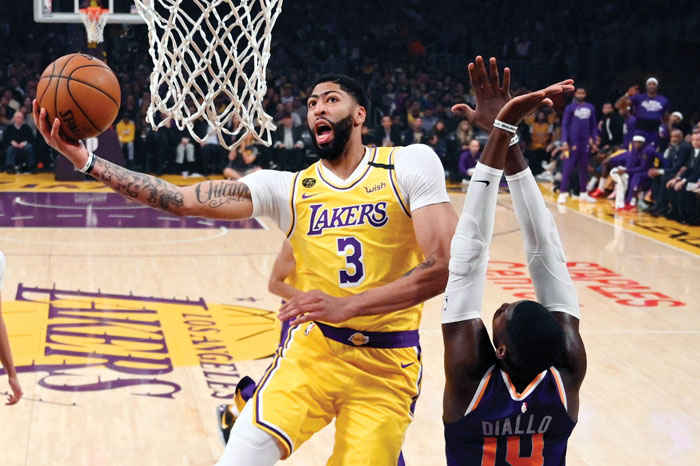 CHICAGO (AP) — The NBA is headquartered in New York. Anthony Davis, one of the game’s biggest names, plays in Los Angeles.

Both, unquestionably, are world-class cities.

But in Davis’ eyes, they both pale to his hometown. And this weekend, the Chicago native believes the eyes of the basketball world are where they belong — on his city.

Chicago is called the Second City, though no one from Chicago believes that the city is second to any other city on the planet — particularly those who represent the city in the NBA. L.A. has the glitz and glamour of the Lakers and now the Clippers, New York has the tradition of Madison Square Garden and possibly the best-known outdoor court in the world at Rucker Park, but Chicago guys scoff at the notion that the game means more anyplace else.

That’s why hosting All-Star weekend, with the events beginning in earnest Friday, is a badge of honor for Chicago. It’s been more than 20 years since Michael Jordan and the Bulls finished their run of six titles in eight years, nearly a decade since native son Derrick Rose gave the city its last NBA MVP and five years since the city celebrated winning an NBA playoff series. Though the Bulls are not good these days, anywhere one looks in the city Bulls red-and-black gear is still being worn proudly by a steeled fan base.

“Chicago is the Mecca of the game,” Davis said.

It’s silly to argue that with anyone from Chicago, since the agreement is basically unanimous. It’s the city that gave the NBA players like Dwyane Wade and Isiah Thomas, George Mikan and Maurice Cheeks, Mark Aguirre and Tim Hardaway. It boasts Cazzie Russell and Terry Cummings, Eddie Johnson and Dan Issel, Juwan Howard and Jeff Hornacek.

Duke coach Mike Krzyzewski was born in Chicago. So was Doc Rivers, now the Clippers coach and a one-time NBA All-Star — back in 1988, the last time the league’s showcase weekend was in the Windy City.

“As far as I’m concerned, Chicago IS basketball,” Rivers said.

Rivers has a story that he thinks sums up the city’s love affair — and its affinity — for basketball. He recalls March 4, 1978, the day that the Chicago Daily News published for the final time in its 102-year history.

Much of the paper that day was devoted to its own history, which included 15 Pulitzer Prizes. Also covered in that final paper: high school basketball from the night before.

“Basketball, even high school basketball, is important in Chicago,” Rivers said. “They were covering it on the last day of their paper. That’s how important it was. It’s very important to the city. And I was lucky enough to be part of that.”

There will be plenty of Chicago flavor at this All-Star: Davis is in Sunday’s game, Patrick Beverley of the Clippers is in Saturday’s skills competition, and Miami’s Kendrick Nunn is in Friday’s Rising Stars game. Much of the entertainment the NBA is showcasing over the course of the weekend is also from Chicago: Jennifer Hudson was booked this week to perform a pre-All-Star game tribute to Kobe Bryant and the other victims of the helicopter crash that took the former NBA players life; Chance the Rapper and Common will play big roles throughout the weekend as well; Queen Latifah is performing during All-Star Saturday.

Also Saturday, President Barack Obama — another proud Chicagoan, and like Rivers an unabashed White Sox fan in a baseball-loving city where Cubs allegiance runs deep — will be hosting a roundtable discussion with several NBA players.

It is a celebration, tempered somewhat by the ongoing mourning of Bryant — in Chicago’s Midway Airport, someone taped a Bryant poster up near one of the gates in a busy terminal. No one seemed to know who put it there, and no one at the airport plans on taking it down, either. And this weekend also comes as the city continues to deal with a massive problem of gun violence, though the murder rate has dropped in each of the past three years.

Rivers said he thinks a quote from former Bulls coach Phil Jackson — “It’s a city with broad shoulders” — is one of the most appropriate ways to describe Chicago.

“The thing about Chicago, it’s a loyal sports town,” Rivers said. “The teams have been up and down, more down, but they don’t go away. When you play the Bulls on the road, it’s packed with Chicago fans. … It’s a city that has grown up through sports.”

The Phoenix guard — who felt he was snubbed by voters and coaches when he didn’t make the original list for Sunday’s game in Chicago — was tabbed Thursday as the player who will replace injured Portland guard Damian Lillard in the game.

Booker was chosen by Commissioner Adam Silver, who makes the final call on injury replacements to the All-Star rosters. By NBA rule, the replacement player has to come from the same conference as the injured player.

Lillard injured his groin on Wednesday night and said he would not be able to play in either the game or Saturday night’s 3-point competition.

“Hopefully somebody who should have been there and didn’t make it … hopefully, Devin Booker or somebody like that will get the spot,” Lillard said Wednesday night.

The NBA agreed. Booker will play for Team LeBron — the team selected by LeBron James, one of the captains alongside Milwaukee’s Giannis Antetokounmpo — on Sunday night, and also take Lillard’s spot in the 3-point contest on Saturday.

Booker is 10th in the NBA in scoring this season, averaging 26.4 points per game. He and Washington’s Bradley Beal were, until Thursday morning, the only two scorers in the league’s top 10 to not be picked for the All-Star team.

The Suns took their frustration over Booker not being picked as a reserve public earlier this month, after he didn’t pick up enough support from the league’s head coaches. Fans, players and media voting is used in the formula to choose the All-Star starters; the task of choosing the reserves is solely on the coaches.

“I’ve played with and against multiple All-Stars in this league and Devin Booker is undoubtedly an NBA All-Star,” Suns general manager James Jones said when Booker was originally snubbed.

In the end, Jones was right.

Booker becomes Phoenix’s first All-Star since Steve Nash in the 2011-12 season. Booker is shooting a career-best 49.6% from the field and another career-best from the foul line this season, 92%.

Although this is his first All-Star Game, Booker has been part of All-Star weekend in each of his five NBA seasons. He has been in the 3-point contest three other times, winning the title in 2018 and also competing in 2016 and 2019. He was a finalist in that event as a 19-year-old in 2016, alongside Golden State’s sharpshooting duo of Klay Thompson and Stephen Curry.

Booker took part in the Skills Challenge in 2017. He also scored 25 points in the 2016 Rising Stars game and 17 points when he returned to that game for first- and second-year players the following season.

The NBA is changing the format to this season’s 3-point contest by adding a pair of deep shots that will be worth three points apiece. That change means each round will now be a total of 27 shots instead of 25, and competitors will now get 70 seconds to finish their shots instead of the customary 60.

The two additional shots will come from six feet beyond the 3-point line, between the racks located on the wings and the one at the top of the key.