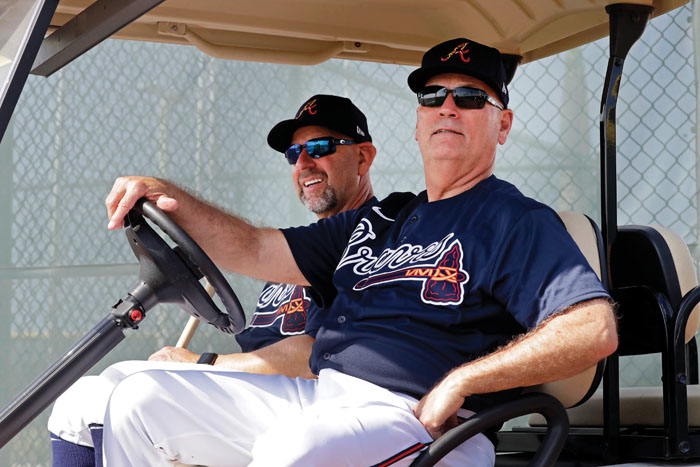 NORTH PORT, Fla. (AP) — Felix Hernandez turned around with surprise as he sensed media waiting to engage him.

“You want to talk to me?” the new Atlanta Braves pitcher asked.

Hernandez’s presence is one of the early sub plots for the defending National League East Division champions. Free-agent acquisition Cole Hamels, pegged No. 4 in the team’s rotation, may miss three weeks of camp with shoulder soreness. There already had been an expected duel for the No. 5 spot between Hernandez, Sean Newcomb, Kyle Wright and recently signed Josh Tomlin.

The Braves worked out their pitchers and catchers for the first time Thursday. Position players aren’t required to attend until next week.

The No. 4 and 5 starter spots are important because the Braves hit the ground running with their schedule. They open at Arizona on March 26, which will start a stretch where they have just one day off in their first 25 games.

“I’m not concerned,” Braves manager Brian Snitker said. “We’re farther along than a year ago when we had injuries to our starting pitching. We have 160 more innings of experience so we’re better served to fill those roles than last year.”

A smiling Hernandez said he’s healthy and dropped a few pounds from his 225-pound frame.

“I feel really good, no complaints, now I have to go out and do my thing,” he said.

From 2009-2015, Hernandez was one of the best pitchers in baseball for the Seattle Mariners. He won 104 games in those years, always threw more than 200 innings and ranked in top 10 for Cy Young Award voting seven times.

Braves ace Mike Soroka said, “It’s going to be cool to watch him. You see what he did every year. He pitched 240 innings. He has a chance to be in the Hall of Fame. And he still wants to be out there.”

However, the last two years have been rough for “The King.”

Fernandez said a muscle strain on his right side caused more problems than his shoulder.

“I was not healthy,” he said. “Let’s forget about it, it’s in the past. New organization, new team.”

“He told me the truth and straight to my face, what’s going on,” Fernandez said. “He told me about veterans like (Annibal) Sanchez and (Anthony) Swarzak. He said, ‘You gotta chance to be in the playoffs, make the World Series. It’s a great group of guys with a great reputation.”

Fernandez never has pitched in the postseason.

“That’s the plus,” he said. “For me, it’s about making the playoffs. These guys, they’re really good.

“It’s tough for Hamels. But I just have to go out and do my thing.”

Hamels recently informed the Braves’ medical staff of the shoulder discomfort he felt after completing weighted-ball drills. The 36-year-old is currently in Dallas undergoing treatment with noted surgeon Keith Meister.

Newcomb said he’s been preparing to be a starter all offseason. After making 30 starts in 2018 and going 12-9 with a 3.90 ERA, the former first-round pick pitched just 68 1/3 innings last year after struggling with his control.

Tomlin, 35, signed a minor-league deal on Wednesday. Last season in 51 appearances and one start, Tomlin had a 3.74 ERA. He opted to re-sign with Atlanta after not receiving the guaranteed deal a couple of other teams were pondering offering as recently as Tuesday.

NOTES: New Braves C Travis D’Arnaud said he has a lot of learning to do after signing a two-year, $16 million deal with the team in the offseason. “I’ve seen the video so I’ve seen the potential,” D’Arnaud said. “It’s more about communication and finding out their thinking on the mound, how they execute their pitches and use other pitches to get outs. D’Arnaud is coming off a 16-homer, 67 RBI season for the Tampa Bay Rays. He hit .263. … Position players don’t need to be in Northport until Tuesday but OF Ronald Acuña not only arrived early but told a translator he wants to have the first 50-50 season in Major League history. “I don’t want to stay complacent,” Acuña said.