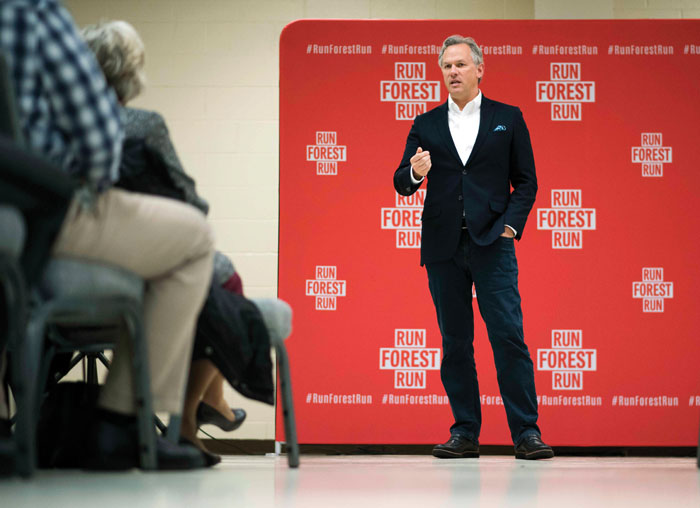 SALISBURY — Lt. Gov. Dan Forest, a Republican candidate for governor, had a message for law enforcement at a Tuesday town hall: if public safety isn’t taken care of, other things don’t matter.

Forest during the campaign event at the Rowan County Rescue Squad opened a conversation about the importance of working with the U.S. Immigration and Customs Enforcement and having resource officers in every North Carolina school. The issue of “law and order” rises to the top of his priorities, said Forest, who is favored to win his Republican primary competition in March against State Rep. Holly Grange.

He said most North Carolina sheriffs are trying to uphold the law and keep criminals off the streets, but some of the sheriff’s in more populated North Carolina cities have decided not to follow federal laws, referring to U.S. Immigration and Customs Enforcement’s program that partners with state and local law enforcement agencies to remove people who are in the country illegally.

The decision of these sheriffs is purely political, Forest said.

“If you’re committing a violent crime, there is no place for you on the streets of North Carolina,” he said.

Cabarrus County Sheriff Van Shaw, who was in attendance Tuesday, said he cooperates with ICE under what’s called the 287(g) program — in which local officers identify, process and remove arrested undocumented immigrants with criminal charges and/or execute limited functions of an immigration officer within jails.

“Nobody is exposed to the 287(g) program unless they have broken the law,” Shaw said. “They appear before a judicial official, and they’ve been confined in my jail.”

Lincoln County Sheriff Bill Beam, also in attendance Tuesday, said officers will soon participate in a federal program that teaches them tactics to better screen for criminals that are in the country illegally.

During the event, Forest asked for feedback about school safety.

In an interview following the town hall, Forest said providing funding for school safety is about prioritization.

“When we say protecting our kids in our schools is our highest priority, then you can find money from somewhere to place in a resource officer in the schools to protect our kids,” Forest said.

Forest said he would not micromanage law enforcement officers and first responders if elected. He told those gathered law enforcement has been attacked lately when “the reality is all of you are trying to do your job, the best you can with the tools you have.”