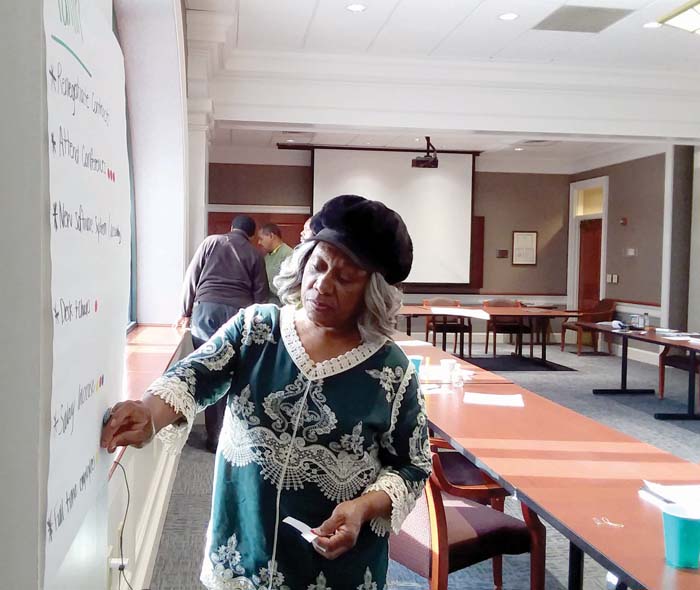 East Spencer alderwoman Deloris High places a dot beside the items that she feels the board should prioritize. After the board retreat each alderman placed dots beside each department they deemed a priority. Shavonne Walker/Salisbury Post

EAST SPENCER — The town board and staff members on Tuesday prepared for new infrastructure and talked about needed new equipment during its annual planning retreat.

The eight-hour retreat was an opportunity for the board to hear from department heads about equipment needs, goals and how the town can be more attractive to prospective businesses and potential homeowners.

One of the top goals said Macon Sammons Jr., the town’s grants and special projects coordinator, is the development of a new town center. Sammons said the town also wants to see economic growth at Interstate 85 exit No. 79, which channels traffic into East Spencer and Spencer.

Sammons told the board he and alderwoman Deloris High looked four years ago into several other communities that successfully redeveloped their downtown, including Locust, Harrisburg, Matthews, Weddington and Pittsboro. The towns experienced a dramatic and positive change as well as an increased tax based, Sammons said.

The police station is currently situated at the back of town hall and has no front entrance, Hovis said.

Because the department shares a building with town hall, it’s limited on space and shares office space or makes use of a town hall conference room to interview citizens or conduct interrogations.

She said the department does not have an official booking room, equipment room or front lobby and a lack of adequate parking for officers and visitors.

“We have a full police department and we are kind of working in a closet,” Hovis said.

She said the town is growing and needs to be able to accommodate that growth.

Mayor Barbara Mallett said it would be costly to renovate the former school administration building on Long Street and that she would rather see police and fire have a new facility.

McBride also expressed concerns about equipment maintenance, saying the department’s trucks are 19 and 27 years old. The 19-year-old truck has never received proper maintenance, he said. Also, it was purchased from a fire department in Rhode Island via South Carolina. It was not a good idea, McBride said, to buy a truck from a state that experiences a lot of snow days. The bottom is rusted and it was in a collision before the town purchased it.

He suggested buying a used truck for less than $20,000 from the Fairview Fire Department near Asheville.

McBride also discussed the state of the station. He said some maintenance improvements done by the previous chief have not held, including gluing paper onto the ceiling.

Public Works Director Kenny Clement said he would need some heavy equipment to be more efficient in his job. A lawnmower and tractor with a loader were two items he asked for.

Clement said his department’s future goals are to be more proactive, handle citizens’ needs in a timely manner, and schedule pickups so residents will know when items are going to be collected.

Bennett said he’d also like to see the board networking and attending more training workshops and conferences.