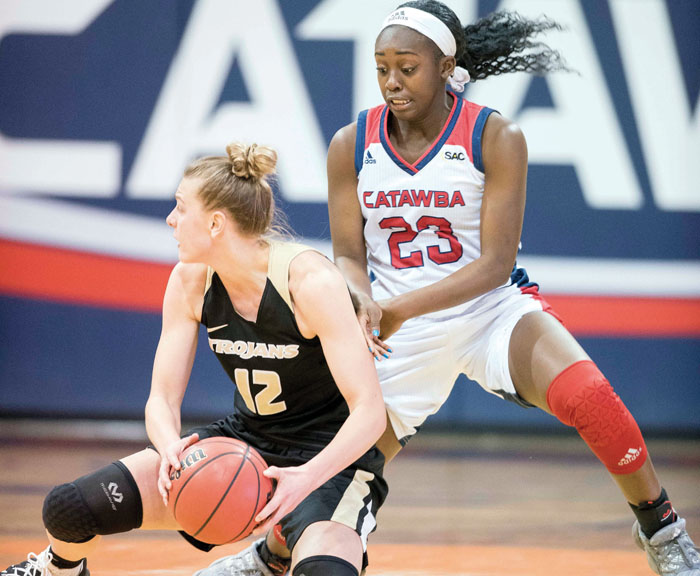 Garris, one of three Catawba seniors, was surrounded in the lane by multiple Cobras, but she made a prudent decision. Rather than trying to force the ball back toward the rim through heavy traffic, hoping for a whistle, she kicked the ball back out.

Lyrik Thorne accepted the pass from Garris and made the open 3-pointer from the left corner.

“There’s always a crowd when you get an offensive rebound,” Garris said. “I’m a patient player. I always look to see where my teammates are before I try to shoot. Lyrik was open.”

Wednesday night’s triumph at Goodman Gym meant quite a bit. Wingate upset Anderson, 59-56, so the Indians (19-3, 14-3) moved back into a tie for first place with Anderson.

Thorne’s corner 3-pointer was followed immediately by a 3-pointer by Madi Hallman from the top of the wheel.  Then Taisha DeShazo nailed a 3-pointer from the right side. Suddenly, Catawba was up 11, and Coker was getting a timeout, but that 30-second pause didn’t put the brakes on Catawba’s momentum.

“We didn’t play well in the first half and knew we had to get in a rhythm,” Hallman said. “Then we started making shots. We pressed more on defense in the second half and that got our energy up. Then we saw we had a chance to put them out of the game, and that’s what we did.”

Steals and fast-break layups by Thorne and DeShazo pumped Catawba’s lead to 48-33.

Coker, efficient on offense in the first half, couldn’t make a shot, and Garris was cleaning the defensive board for the Indians, time after time.

“Garris is one of those players that does a lot of things that don’t show up on the stat sheet,” said assistant coach Terence McCutcheon, who was in charge of the team for the third straight game. “She’s smart. Her teammates trust her. She’s always in the right spot. Sometimes you don’t notice her until she comes out of the game, and then you realize how well she was playing.”

Another 3-pointer by Hallman boosted the lead to 18. Then Shemya Stanback spotted Janiya Downs for an open 3-pointer. The freshman swished it for a 54-33 lead. That was the shot that started the Coker bus for the trip back to Hartsville, S.C. There still was a long way to go, but it was all over.

“We shot very well as a team, but just as important we were locking them down on defense during that run,” Garris said. “It’s nice to score, but defense is always our main priority.”

Catawba made 12 3-pointers, with eight players connecting. Hallman was 3-for-4 from long range. Stanback was 2-for-2, while DeShazo was 2-for-3. Thorne, Downs, Anna Gardner, Emily Phillips and Kaitlin Stevenson made one each.

Catawba forced 25 turnovers and got 30 easy points off those Coker miscues.

The first half didn’t go well for the Indians. Coker shot 56 percent for the half and 63 percent in the second quarter. Catawba led 35-33 at the break because it made 14 free throws.

“We over-helped on their bigs and they were kicking it and knocking down a lot of shots,” McCutcheon. “But we didn’t panic. We settled down at halftime. We knew if we kept playing our game, things would turn our way.”

Next for the Indians is a tough road game on Saturday at Carson-Newman. Catawba lost in overtime to the Eagles at Goodman Gym on Jan. 4.