Show your love with bites of sweetness 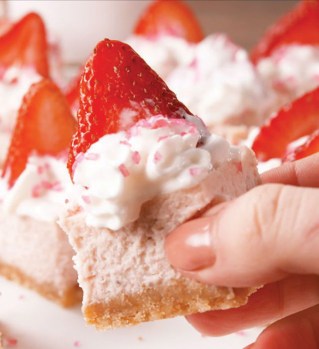 Delish Fix your sweetie these Moscato Cheessecake Bites and enjoy the leftover bubbly right alongside them. 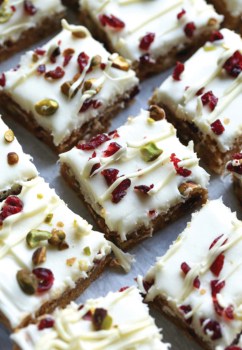 Cookies and Cups Not that into chocolate? These blondies get a kick from dried cranberries and pistachios. 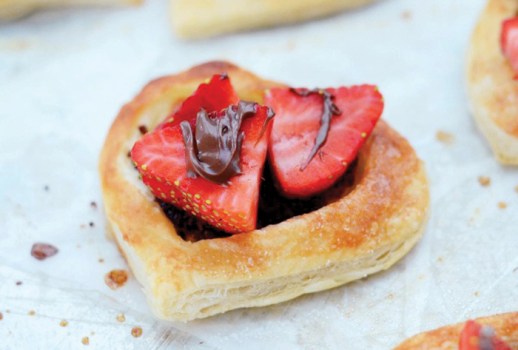 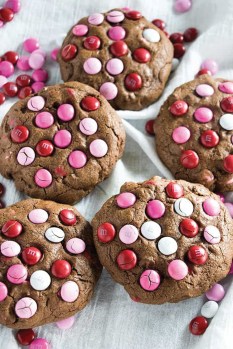 Chocolate became associated with love during the Victorian era, when people were inspired by Medieval courtly love and chivalry.

And we fell in love with chocolate as a symbol of love any time, but especially on Valentine’s Day, with those huge, heart-shaped boxes of candy, or chocolate hearts.

What other foods are associated with love?

Strawberries. Some people think of them as heart shaped, and red. Strawberries became associated with the love goddess Venus in ancient Rome. What could make a strawberry better? Dipping it in chocolate, of course. Or letting it star as the flavor of your desserts.

Valentine’s Day, like so many of our yearly celebrations, originated in an ancient festival. The Romans celebrated Lupercalia in mid-February as the coming of spring. That festival included fertility rites and a pairing off of men and women by lottery.

At the end of the 5th century, Pope Gelasius I replaced Lupercalia with St. Valentine’s Day. It became a day to celebrate romance in the 14th century.

There’s some question about which Christian martyr named Valentine the day celebrates, but one was a defender of marriage and another was a healer.

Valentine’s Day is very popular in the United States, as well as Britain, Canada and Australia, but other counties also celebrate, such as South Korea, France, Mexico and the Philippines.

You don’t have to have chocolate or strawberries on Valentines’s Day, but you may find something interesting here.

Preheat oven to 350 degrees. Line two large baking sheets with parchment paper or a silicone baking mat and set aside.

In the bowl of a stand mixer or in a large bowl with a hand mixer, beat together the butter and sugar until light and fluffy, 2-3 minutes. Turn mixer to low speed and add the eggs one at a time. Add the almond or vanilla extracts. Scrape bowl as needed.

Stir in the chocolate chips and 1/2 cup M&Ms.

Divide dough into 12 equal pieces. Roll each into a ball and place on prepared baking sheet; flatten slightly with your hand. Repeat with remaining dough and top with the remaining M&Ms.

Bake in a preheated oven for 13-16 minutes. Allow to cool for 10 minutes on baking sheet before moving to a wire rack to cool.

Roll out thawed dough on a floured surface to 1/4 inch thickness. Cut out heart shapes with a cookie cutter or a knife. Make a border about 1/4-1/2 inch inside, depending on the size of your cookie cutter, not cutting the pastry through. Use a smaller cookie cutter or knife. This allows the edges to puff up.

Spread Nutella in the middle with a spoon or offset spatula. You can also do this after the pastry has cooked. Brush milk around edges and sprinkle with sugar. Bake 15-20 minutes.

Allow to cool slightly and top with sliced strawberries. Drizzle with more Nutella or sprinkle with powdered sugar.

Preheat oven to 350 degrees Line a 9-by-13-inch baking dish with parchment paper or foil and coat with nonstick spray. Set aside.

In the bowl of your stand mixer fitted with the paddle attachment, mix the butter and brown sugar together on medium speed for 2 minutes. Add in the eggs, vanilla, baking powder, and salt and mix for another minute until smooth, scraping the sides of the bowl as necessary.

Turn mixer to low and add flour and mix until just combined. Stir in the cranberries, pistachios and white chips until evenly incorporated.

Spread the mixture in the prepared pan and bake 18-20 minutes, until the center is just set. Do not over bake.

All ow to cool completely in the pan before frosting.

To make the frosting, mix the cream cheese and powdered sugar together until smooth in the stand mixer. Spread evenly on the bars.

Top with cranberries and pistachios, if desired and drizzle with melted white chocolate.

Preheat oven to 350 degrees and line an 8-by8-inch pan with parchment paper.

In a large bowl, combine Nilla Wafer crumbs with melted butter and stir to combine. Press into prepared baking pan and set aside.

In another large bowl, beat cream cheese and sugar until well combined and fluffy. Add pureed strawberries, Moscato, cream and cornstarch and mix until just combined. Beat in eggs one at a time until smooth. Pour mixture over prepared crust and spread in an even layer.

Bake for 25-30 minutes, until center is just slightly jiggly. Turn off the oven and prop door open; let cool for 1 hour, then refrigerate until cooled completely, 3-4 hours.

Cut into small squares or large and garnish with whipped cream, strawberries and pink sugar or sprinkles. And enjoy the rest of the Moscato.