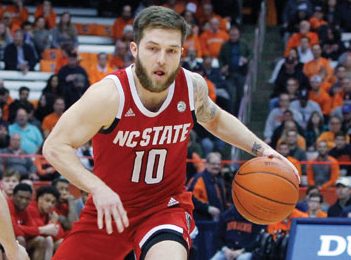 SYRACUSE, N.Y. (AP) — North Carolina State coach Kevin Keatts was proud of his team for overcoming “all types of adversity.”

Syracuse coach Jim Boeheim was proud of his team, too, even though the Orange couldn’t overcome major adversity of its own.

Syracuse (14-10, 7-6) played most of the game without junior Elijah Hughes, who leads the Orange in scoring at 19.4 points per game. Hughes suffered an apparent groin injury in pre-game warm-ups, went to the sidelines less than three minutes into the game, and never returned.

“I thought everybody did an unbelievable job,” Boeheim said. “When you lose your best player, one of the three or four best players in the league without being able to practice, it’s difficult. But they did everything they could; they got right back in it. They were very good today for not having him (Elijah). Exceptionally good.”

Boeheim said he thought he’d seen everything in his 44 years leading the Orange, but Hughes’s injury was a new one.

“I’ve never had a player in 44 years get hurt in warm-ups but there’s a first time for everything. Disappointing, disappointing. It’s a pressure team and that’s where he thrives. “

The Wolfpack wasn’t without adversity of its own.

“Our guys did a tremendous job finishing the game,” Keatts said. “When you look at it, we had all types of adversity. When you look at our post guys, they never got into a rhythm because they didn’t get a chance to play a lot. We had some adversity because we were in foul trouble.

Buddy Boeheim and Girard, who took the Orange’s only 3s, were a combined 3 of 18. For the game, the Orange hit just 39% from the field.

“When he (Elijah) went out, me personally, I knew what the team was thinking, next man up mentality, so we knew they weren’t going to back down,” Daniels said. “They’re (Boeheim and Girard) great competitors. And we just tried to make it tough on them.”

The Orange had its biggest lead of the game at 68-62 on two foul shots by Girard but Daniels scored the next seven points, giving the Wolfpack a 69-68 lead with 4:26 remaining.

“We were just trying to pressure them on defense and good things happen when you do that,” Daniels said of his run.

Center Bourama Sidibe has fouled out of four straight games for Syracuse, totaling seven for the season.

The Wolfpack turned 15 Syracuse turnovers into 23 points. Syracuse only managed 12 points on a season-high 19 Wolfpack miscues.

NC State: The Wolfpack got the big win it needed but still has a tough road ahead with two games against Duke and one against Florida State.

Syracuse: The Orange must defeat both Florida State and Louisville, both on the road, if the team has any hope of making the NCAA Tournament.