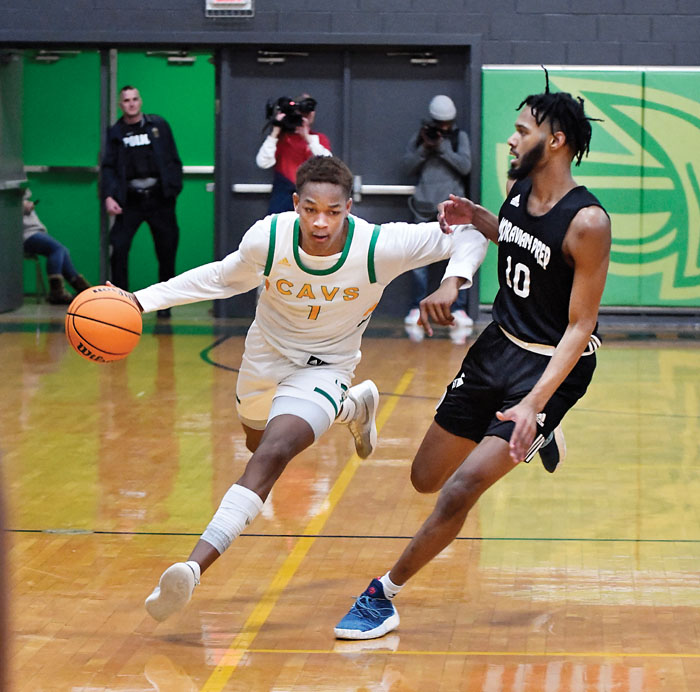 North got off a wild ride smiling, 61-50 winners over Charlotte’s Elevation Prep Academy’s Honey Badgers in a frantic tussle that took place on Monday night in the North gym.

North missed dunks, clanged second-half free throws and threatened to set turnover records, but the Cavaliers were strong-willed. They persevered. They didn’t lose any swagger in Saturday’s 50-point loss to Moravian Prep’s national team. If anything, North gained confidence from that humbling experience against big-time recruits.

The strengths for North definitely were defense and rebounding. Sophomore Brandon White, who is almost 6-foot-10, blocked four shots in the first quarter alone. White, 6-4 Kendrell Goodes and 6-5 Brandon Jefferson are all shot-blockers and shot-changers. Elevation Prep (9-16)  had a difficult time finishing anything in the lane.

The Honey Badgers managed to stay in the game until the final minute mostly because of their success at the 3-point line. They made nine from long range. North (16-7) made just one 3-pointer. That was by Davis to open the scoring.

“Elevation Prep has good size and good athleticism and we had identified three of their kids as really good shooters,” Causby said. “By all accounts, that’s a pretty good team.”

North had a nice spurt at the end of the first quarter to take a 19-14 lead. That strong stretch was fueled by the work on the boards of White, Goodes and 6-5 Denerio Robinson.

“We kept pounding,” Robinson said. “We stressed boxing out and we didn’t stop working. We went hard on the boards all night.”

White’s and-one dunk pushed North to a 29-17 lead in the second quarter. The Cavaliers went up  by 15 when Jefferson made two free throws, but EP staged a flurry at the end of the half to get the deficit down to 33-24.

“It’s a big difference mentally being down nine instead of 11 at half,” Causby said. “We played really well most of the first half, slowed down enough to make some plays, but then we didn’t finish the half the way we wanted. We turned it over a lot. Anytime, we showed uncertainty handling the ball, they took advantage.”

North quickly reclaimed momentum at the outset of the third quarter. When Goodes fed White for a vigorous slam and Davis roared coast-to-coast for a manly layup, North was up 38-24 and appeared to be on the verge of blowing out the visitors. But then EP found its second wind, finished the quarter with a burst and was only down five.

In the first two minutes of the fourth quarter, EP kept coming. It was 43-all when Robinson stepped to the foul line with 6:00 left and made two clutch free ones to keep North in front.

With five minutes left and leading by one, North was able to set up its press and created two critical turnovers. Goodes made a steal that got Robinson a bucket. Then Goodes scored himself for a 49-44 lead.

“They’re a good pressing team and teams that like the press usually don’t like to be pressed,” Causby said. “That’s the old adage.”

Stephen Quinn, a shooter, scored all 11 of his points for EP after halftime. His 3-pointer sliced North’s lead to two, but Jefferson make a free throw and then got a friendly whistle for a three-point play and a 53-47 lead with 2:30 remaining.

Quinn made another 3-pointer with 1:47 left for 53-50, but Davis attacked the rim without hesitation to put the Cavaliers back up by five. Davis’ vital basket triggered an 8-0 finishing kick.

After an EP turnover, Davis fed Robinson for a bucket. White dunked for the 59-50 lead that iced the victory. Then White capped the scoring with another enthusiastic stick-back.

“We played together and we got after it,” Robinson said. “We kept pushing.”

White had 14 rebounds and a bushel of blocks to go with his 17 points. Robinson scored 14. Goodes had nine points, 12 rebounds and six steals.

“We missed a lot of point-blank shots, but we also played really hard,” Causby said. “This game was good preparation for the playoffs.”

NOTES: North plays at home tonight against South Davidson and should clinch a tie for first place in the YVC. It will be North’s final regular-season game. South Davidson is hosting the Yadkin Valley Conference tourney. Jaden Cooley scored 14 for Elevation Prep.