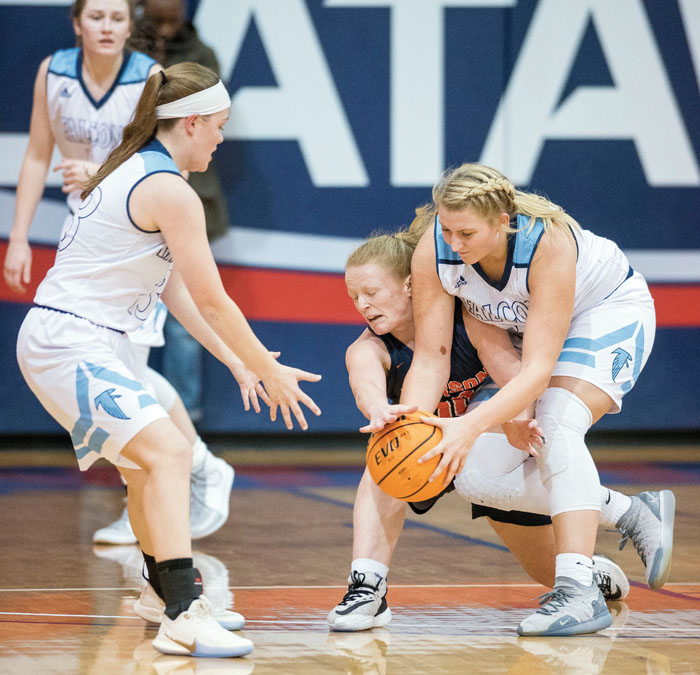 Normally heavily reliant on the 3-point line, the Cougars made just three 3-pointers, but they still pounded West Rowan, 61-42, in front of a huge crowd on the Falcons’ Senior Night.

Layups and free throws were enough for the Cougars.

“West always does a great job of taking the 3-point line away from us,” winning coach Brooke Stouder said. “We had to find other ways to score, and we did that tonight. We stayed in attack mode and we took it to the basket. We’re undersized and West is big, so they’re going to block some shots, but that was fine. We stayed with it. We kept attacking.”

West’s Abigail Wilson, who essentially was double-teamed, front and back, still scored 20, but Carson could live with that. She averages 28. Taylor Poole had a third-quarter flurry and scored 11.

Carson got 13 points from Colbie Perry, all in the second half.

A junior-heavy Carson team (20-3, 8-1) had lost twice previously to the Falcons, who start five seniors, with one of those setbacks in the Christmas tournament championship game. This victory meant not only some revenge, but a North Piedmont Conference championship banner for the Cougars. Carson tied for first in 2018 and won the league outright in 2019.

The key was Carson point guard Lani Isley, who controlled the game with her ball-handling skills. Isley is quick and strong, and while she’s regarded as a non-shooter, she came through with a season-high 12 points. She finished some drives, and even when she didn’t get all the way to the rim, her penetration into the lane got someone else open.

Carleigh Perry, who had 12 points, seven rebounds and three steals, got the Cougars started, working for three first-quarter buckets. That off-set three power baskets by Wilson, and Carson led 13-12 after a quarter.

The second quarter would prove decisive. Carson outscored the Falcons in that period, 17-7, to take a 30-19 halftime lead. Ellie Wilhelm and Hannah Isley, Lani’s younger sister, keyed Carson’s offense, and pressure defense caused lots of problems for the Falcons.

“Our defensive pressure was key, not just forcing turnovers, but helping to tire West out,” Stouder said. “They got a little bit tired, and that’s when we built a lead.”

“You take a charge and the bench gets fired up and your fans get fired up,” Lani Isley said. “Huge momentum.”

Maci Cooper and Colbie Perry took the other charges.

“The first charge taken for Colbie this season and probably the first of her career,” Stouder said with a smile. “She was pretty excited about it. We’ve got incentives for taking charges. Four charges is a goal every game for us.”

Poole scored seven points for the Falcons in the third quarter, making two long 3s, but Carson still stretched its lead to 44-30. Colbie Perry, a streaky shooter who was silent in the first half, got eight points for the Cougars in a hurry. Her spree included two of Carson’s 3s.

“They were face-guarding me in the first half, but then West went to a zone for a while,” Colbie Perry said. “That gave me some opportunities.”

When Hannah Isley started the fourth quarter with a free throw and Lani Isley followed with two straight driving buckets, it was all over.

Carson led by as many as 21 points. Wilson didn’t stop competing and got four buckets in the fourth quarter, but Carson made eight free throws down the stretch and won with ease.

“Abigail was the focus of our defense,” Colbie Perry said. “She’s really good and really hard to stop. You just have to try to box her out on every single shot and you have to pressure their guards so they can’t get the ball inside to her easily. Our defensive pressure was good all night.”

West hurt Carson with stick-backs by Wilson and Whitley Arnott in the first two meetings, but the Cougars did a much better job on the glass this time. Wilhelm had seven rebounds. Lani Isley had four offensive rebounds.

“West had zero second-chance points in the first half, and that was probably the biggest stat of all,” Stouder said. “I was really proud of the effort and the focus we had tonight. Unbelievable intensity for four quarters.”

West (18-4, 6-3) dropped into a tie for second place with East Rowan. The Mustangs handled Statesville.

Carson will celebrate Senior Night with South Iredell visiting on Friday. West will wrap up the regular season at Statesville.