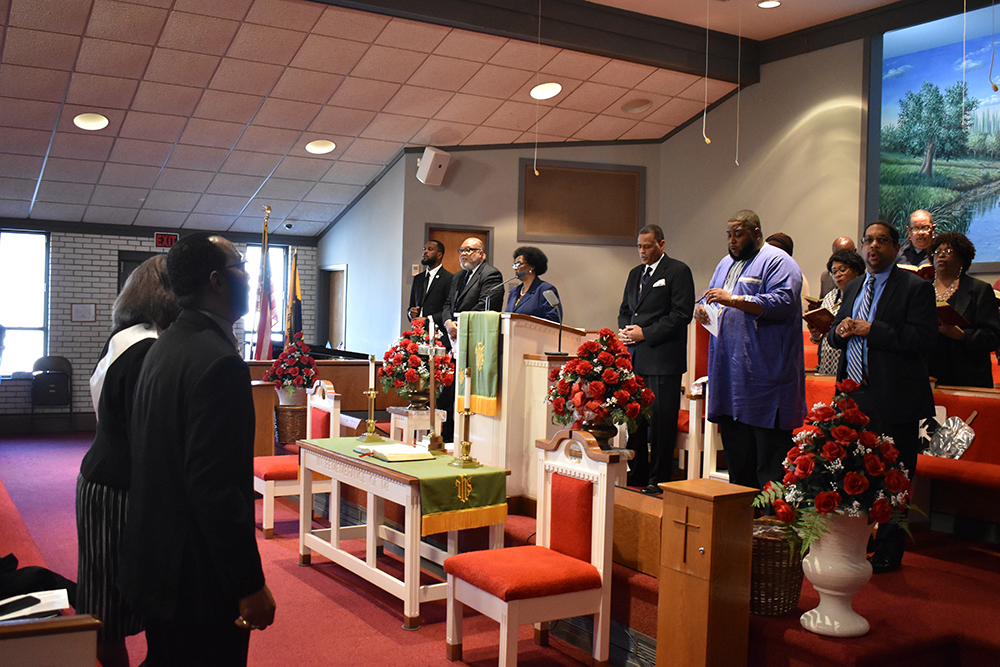 Members of the Salisbury-Rowan NAACP sing during their 41 birthday celebration at Gethsemane Missionary Baptist Church on Sunday.

SALISBURY — The local branch of the NAACP celebrated its birthday Sunday at Gethsemane Missionary Baptist Church with the message “our work is far from over.”

The Salisbury-Rowan NAACP turns 41 in February along with the national chapter’s 111th birthday.

He listed the conversation about Confederate statue “Fame” and the strong relationship fostered with the Salisbury Police Department as accomplishments in the previous year.

Black said he looks ahead to a community that is thriving for everyone. He pictured no longer seeing “Fame” as he drives down Innes Street, jails not being overcrowded and the community being able to have challenging conversations. He also wants to branch out to other municipal police in Rowan and the county’s sheriff’s office for partnerships.

Black said he and the local NAACP’s executive team have built trust in the community through partnerships. Black said the chapter isn’t afraid to challenge those partners when needed.

“I’m proud that we have stayed on task of the work that is ahead of us and we continue to build,” Black said.

In the next year, Black said he also wants the chapter to tackle education-related conversations, provide an understanding of opportunity zones and to ensure the chapter has a voice in every aspect of the community.

Yolanda Woods, the first vice president of the local chapter, said for 41 years the Salisbury-Rowan NAACP has stayed the course and stood strong to advance the organization’s agenda, which is rooted in justice, equality and tolerance for all people. She echoed that the work is not over, though.

“On this occasion, we strongly urge you, because we desperately need each of you to stand with us as we continue the struggle to dismantle the sin of systemic racism, poverty, warmongering, economic injustice, voter suppression and the attacks on the most vulnerable by fighting the forces of fear in the streets, at the city hall, at the Wallace Educational Forum, in the legislature, in the courts and at the ballot box,” Woods said.

The message at the birthday celebration was to vote, as the primary election is this week, and show up to city council, commissioners and town aldermen meetings.

“We have to show up,” Black said. “We can start with voting but we have to consist. Without consistency we will never finish. The work will be far from over.”

The Salisbury-Rowan NAACP general body meetings are the first Thursday of every month at Gethsemane Missionary Baptist Church, 719 S. Caldwell St. in Salisbury.