So far, that funding has been elusive.

Five years ago, DOT closed the road to vehicle traffic because “the foundation of the 85-year-old causeway has slowly eroded, creating a situation where the road can no longer support the vehicles that travel it every day,” Division 9 Engineer Pat Ivey said in 2014. Though, it later re-opened the road under a temporary setup that narrowed two lanes to one and prohibited commercial vehicles.

While a replacement is being designed, its $2.65 million estimated cost has not yet scored high enough to receive funding in the State Transportation Improvement Plan for 2020 through 2029. The STIP, as its known, identifies construction funding for and sets the schedule for transportation projects

“Until the project is funded, we will continue to maintain the one-lane pattern over the causeway,” Ivey said last week in response to a reader question. 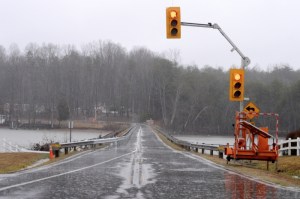 Josh Bergeron / Salisbury Post file photo – A redesigned St. Matthews Church Road causeway over a High Rock Lake inlet reopened after being closed for over a year because of structural problems.

Ivey said he’s hopeful the replacement project will score better in the future because the current cost estimate represents a new, less-expensive design.

One factor affecting funding is a cash-strapped N.C. DOT, which last year delayed a number of road projects across the state included in the STIP after spending more than expected on cleanup and repair associated with Hurricane Florence and a lawsuit settlement.

“We are trying our best to push this project forward to the best of our ability,” said Daniel Dagenhart bridge program manager for DOT Division 9. “Unfortunately, at this time there is no set schedule for the letting date of this project until we acquire the additional funding.”