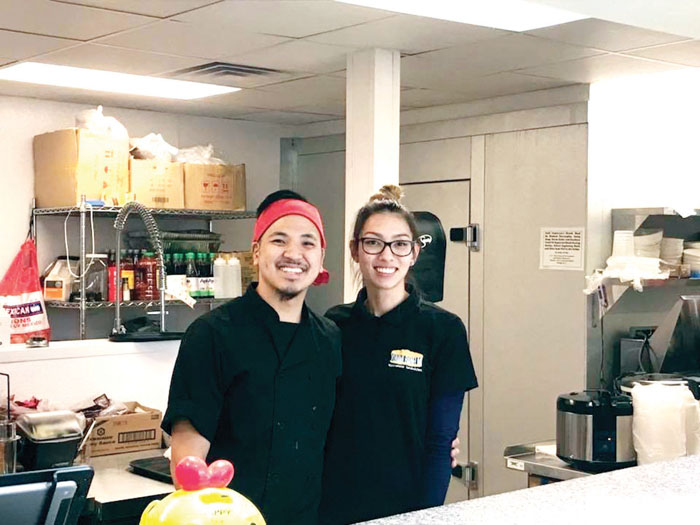 Scott and Julie took a trip to Flavortown, home of Food Network star Guy Fieri’s grocery store in Santa Rosa, California, back in November for a couples-themed Valentine’s Day episode of the cooking competition show.

Scott and Julie said a casting crew contacted them, and after eight interviews, the crew “really liked our energy.” They said the crew reached out to them based on the couple’s social media promotion of their business.

And so they were off to compete and star on the “Married with Kitchen” episode.

On the show, four chefs compete in three elimination challenges, battling for a prize of $20,000. Each competition has a twist, and the winning chef still has to complete a scavenger hunt for grocery items in the store to rack up a full $20,000. The episode Scott and Julie starred on will instead have three couples competing for the prize.

As first-generation Vietnamese-Americans, Scott and Julie wanted to make sure they showed their culture in their food, which the producers and Guy encouraged.

Scott added that the couple wanted to be “respectful for the ones before us, and progressive for ones after us.”

The couple are optimistic their appearance on the show will serve as good promotion for their food truck and restaurant. Guy’s mantra for the show, they added, is all about providing exposure for restaurant owners and chefs.

This is the second time the Food Network contacted Scott and Julie. They said the first time was years ago, shortly after the opening of their food truck in 2015. They were to be on an episode of The Great American Food Truck Race, but after getting married and having a newborn baby, it was just too busy a time to take part.

They couldn’t pass up the second opportunity, saying they felt “humbled and blessed to walk that path.”

Scott and Julie said the time constraints on the show are authentic and it’s as much of a challenge as it appears on TV. Though it felt like “just another day in the office” for Scott, Julie said she was intimidated by going up against professional chefs since she is self-taught. She said she “stepped up to the plate” nonetheless.

And just like the rest of us, Scott and Julie will be watching the complete episode for the first time, as well.