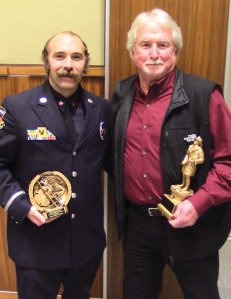 Numerous personnel were honored for their accomplishments in 2019.

The top honors of the night went to retired Assistant Fire Chief Danny Scott, recipient of the Larry C. Phillips Fire Officer of the Year Award, and Senior Engineer Blake Overcash, recipient of the Danny E. Scott Firefighter of the Year Award. These awards are presented annually to firefighters who exhibit exemplary leadership skills, commitment to the department and the community; a high degree of motivation, superior supervisory skills and job knowledge, and personal achievements during the year. Honorees are chosen by their peers for the awards.

Chief Danny Scott retired from the Kannapolis Fire Department in 2007. He served the citizens of Kannapolis starting in 1972 as a volunteer and became the first paid Assistant Chief in 1989. He has remained actively involved in the fire service by serving as an instructor with the Rowan Cabarrus Community College’s Fire Science program. He recently fought a long battle with cancer and is now cancer free. He has used his battle with cancer to be a proponent for cancer prevention techniques and methods currently being developed for firefighters.

Senior Engineer Blake Overcash has been with Kannapolis Fire Department since 2012. He was honored as Firefighter of the Year for his exemplary service including providing excellent patient care when responding to medical calls including things like feeding a baby at a fire and changing bed sheets for a person in need. He has been instrumental in departmental training, including recruit firefighter training and engineer development.

The Civitan Club of Salisbury is currently accepting nominations for the Servant’s Heart Award, a multi-disciplinary award recognizing outstanding service to individuals with Intellectual and Developmental Disabilities (I/DD). Nominees can be teachers, therapists, vocational educators, social workers or others whose excellence in service to citizens with I/DD deserves recognition.

To nominate someone for the award, fill out the application at www.salisburycivitan.org , on Facebook at Salisbury Civitan Club or contact Maggie Blackwell at maggies.attic@gmail.com with the name of the nominee, their role in service, and their contact info.

Nominations must be received by March 8.
The Servant’s Heart Award winner will be publicly honored with an awards ceremony and luncheon at Country Club of Salisbury on April 2.
To learn more, visit www.civitan.org or call 1-800-CIVITAN.

Learn to prune — when and how: The Rowan Rose Society will prune the roses in the Triangle Garden on West Innes St., on Saturday, March 14 (rain date March 21) from 8-10 a.m. Bring your pruners.