‘I am the difference’: Working her way from out of homelessness into a new role as business owner 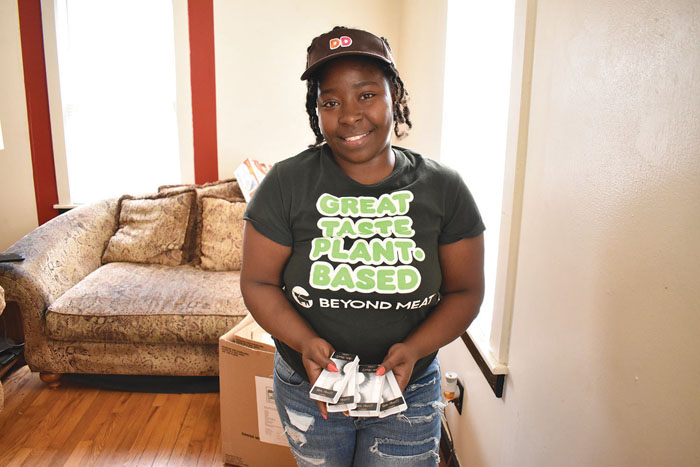 Natalie Anderson/Salisbury Post — Jazmin Dalton battled homelessness for two years before moving to Salisbury and staying at the Rowan Helping Ministries shelter until November 2018. In April 2019, Dalton launched her own mink eyelash line.

Dalton, 26, battled chronic homelessness for two years in Charlotte before moving to Salisbury in July 2018, where she stayed at the Rowan Helping Ministries shelter with her three sons for less than a year before finding a new home.

And now Dalton works as an assistant manager for Dunkin Donuts, owns a mink eyelash business and is working on opening a nonprofit outreach center in town.

“I came here with my boys and didn’t know anyone here,” she said. “Just wanted to start a whole new life. Start from scratch.”

Dalton said she’s had management experience since the age of 19. Before moving to Salisbury, Dalton said she worked at both Starbucks and Doc Popcorn in Charlotte. She cites overcrowding, unaffordable housing and insufficient resources to help her as the biggest obstacles she faced in Charlotte.

“I had to leave because time doesn’t wait for people,” she said. “And I’m not going to continuously allow myself to go through a situation when what I’ve been doing isn’t working. Me coming here is probably the best thing I could have done for myself.”

Dalton and her three sons Jamari, Jamel and Kenneth stayed at the shelter, which served as her “safe haven,” until November 2018.

Kendra Coney, the housing coordinator at Rowan Helping Ministries, said she always noticed Dalton was a hard-working and driven person who was determined to get out of the shelter and do better for her life.

And Jill DeBose, Dalton’s former case manager, credited Dalton with “working her way out of the shelter” on her own. DeBose described Dalton as “ambitious and very respectful” with adorable sons.

Once shelter guests have saved at least a few hundred dollars, case managers refer them to Coney, who assists guests with finding a home somewhere in the county. Coney meets with guests and uses an approved list of landlords to help them budget and find the best fit.

“Once I got the housing referral for her from her case manager, I helped, but (Dalton) really did a lot of that on her own,” Coney said.

Dalton began her eyelash business in April 2019. She enjoys getting her lashes and nails done, but since she’s a busy mother of three, she decided to teach herself how to enjoy such things for much less.

“It doesn’t make sense for me to pay money for something that I could do myself,” she said. “Why don’t I just try to create my own brand and maybe other people who like eyelashes too will want to buy them.”

And though Dalton used her drive and work ethic to get where she is now, she recognizes additional factors often interfere with others being able to do the same. That serves as one piece of inspiration for her current endeavor to give back to the community with an outreach center.

The “transitional home,” as she calls it, would provide housing and job readiness resources for homeless individuals, teen mothers and at-risk youth. Dalton had her oldest son, Jamari, at the age of 14, so she wants to help prevent teen pregnancy.

She is currently awaiting a response to her Articles of Incorporation from the North Carolina Department of Revenue.

Additionally, Dalton is reaching out to owners of abandoned properties “that just need love” around the community to house her nonprofit.

Dalton said she moved her mother to Salisbury from Charlotte, and now her mother has her own place and vehicle. And Dalton’s boyfriend, who she met at the shelter, supports her eyelash business by selling them door-to-door sometimes while Dalton is at work.

At the shelter, DeBose said there are four families that can stay in the family unit. She acknowledged the difficulty many guests have moving from the shelter and into a home, especially parents who have children to take care of. Not having a support system can also interfere with guests getting back on their feet.

“I didn’t have much of a support system (in Charlotte). But here, I was able to build a really solid foundation,” Dalton said. “I have a great support system. Because of that, and being able to have people that are encouraging me through it being tough, that definitely made it easier.”

DeBose and Coney both agree that homeless folks can be wrongfully judged and stigmatized. But they said many who come to the shelter have jobs and just need help finding a home.

“A lot of homeless individuals have income,” Coney said. “They just need the right tools to find housing.”

DeBose said some people she has interacted with in the shelter have been executives or abused for most of their lives.

“Life just happens and something went wrong,” DeBose said. “You have to make choices. Keep going. Never give up hope. Don’t allow your circumstances to define who you are.”

Dalton continues to write down her goals and how to make them happen in her already half-full notebook.