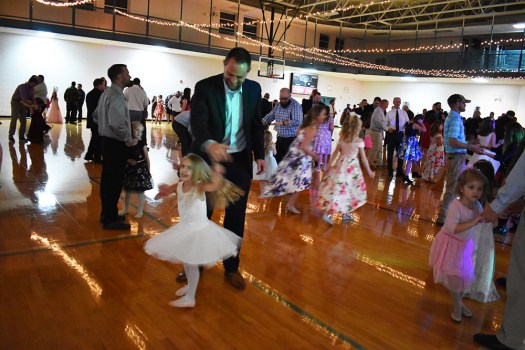 Stephen West twirls his daughter Caroline, 5, at the Somewhere Over the Rainbow Enchanted Ball, a father-daughter dance fundraiser hosted by the South Rowan YMCA. 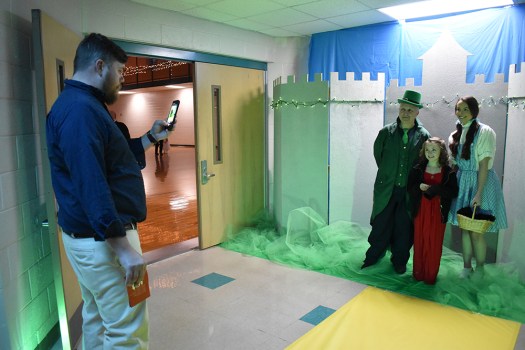 Asa Blackwelder takes a photo of his 8-year-old daughter Carley with Dorthey and Munchkin Mayor at the end of the yellow brick road path before they head to the dance floor.

CHINA GROVE — For hundreds, Saturday was a father-daughter night out at the South Rowan YMCA.

Fathers and daughters entered the J. Fred Corriher Jr. YMCA and followed a yellow-brick-road-path while greeted by Glinda, the “Good Witch of the South,” along with a scarecrow, tin man and cowardly lion. At the end of the road was Dorothy and Munchkin Mayor to lead them to the dance floor.

The South Rowan YMCA has been hosting its father-daughter dance for about 15 years. The annual fundraiser allows it to provide scholarships for those who can’t afford to attend the Y’s camps and program. According to Aaron Crowe, the branch’s executive director, the South Rowan YMCA raised $7,000 with the dance. This year’s theme was Somewhere Over the Rainbow Enchanted Ball.

Daughters wore dresses. Their hair and makeup was done. Their dads wore suits.

Tom and Emily Barlow, 16, have been coming to the dance for seven years. It has become a yearly tradition for the two.

Emily remembers the first year: Her dad gave her a flower, with the tickets asking her to the dance.

“It’s just an opportunity to be here for her,” Tom Barlow said.

But it was a new tradition for Emily’s best friend Hannah Kayali, 17, and her dad Jaime.

Jaime said he was honored to be there with his daughter and “treat her like a man’s supposed to treat her.”

Emily and Hannah said they see no comparison to high school dances like homecoming and prom. It’s time to spend with their dads and teach them how to dance, Emily said. Hannah taught her dad the “Cotton Eye Joe” dance last year.

Jaime said his daughter is busy with high school and the dance gives them the opportunity to be together.

Scott Julian and his daughter Hope, 10, have attended the dance for five years.

Scott Julian said he enjoys it because Hope is the center of attention.

“We don’t have a lot of nights where it’s just the two of us,” Julian said.

Caleb Steedley brought his 11-year-old daughter Sophie. They were waiting for the end of the dance and Sophie’s favorite part: the balloon drop.

At about 7:15 p.m. hundreds of colored balloons fell from the ceiling of the gym onto more than 550 fathers and daughters. Daughters grabbed for the balloons as the sound of popping filled the room over the music.

Kim Deal, the family services director, said it took about a month to make the props. But she began brainstorming months ago for some props, including the huge lollipops at the entrance. She bought pool noodles in the summer when they were on sale.

Deal said fathers tell her every year how much they love the dance because their daughters love it.

Josh Mullis came with Kinsley, 3, to the dance for the first time. His daughter is obsessed with the Wizard of Oz, Mullis said. Mullis, who is a teacher at South Rowan High School, said he liked the ability to give back to the community while having a fun time and an opportunity to bond with his daughter.

Before they got to the dance, Kinsley had a spa day to relax.

Graham said the dance is one of their favorite days of the year. They have been coming for four years.

“It’s a special night with them,” Graham said. “Dads don’t get to do that a lot.”

Olana and Oakley like the music and dancing the night away.