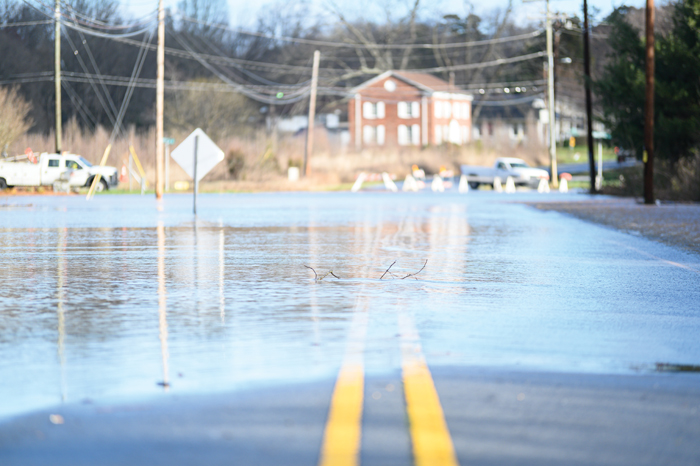 Josh Bergeron / Salisbury Post - Grants Creek overtopped its banks after heavy rain Thursday that continued into Friday, leading to road closures like this one on Old Mocksville Road.

CLEVELAND — Three people were rescued from two boats Friday morning at Third Creek after they unsuccessfully tried to retrieve feeding troughs that washed away in rising water.

Two young people were paddling out in the water in a jon boat and were unable to make it back to shore because of the strong current. A third person using a motorized bass fishing boat attempted to rescue them and became tangled in a fence on the property, according to Cleveland firefighter David DeGrave.

The incident occurred near U.S. 70/Statesville Boulevard at Marvin Gardens Drive near the Third Creek bridge.

DeGrave said the water was higher than normal because of the heavy rainfall lingering from storms Thursday that included tornadoes touching down in parts of Rowan and Cabarrus counties along with strong wind that led to downed trees and power outages. And high water was one common sight throughout Rowan County as water slowly drained. Charlotte TV news station WSOC reported that eight other people were rescued from their home around 5:30 a.m. on Godbey Road as floodwaters trapped them. 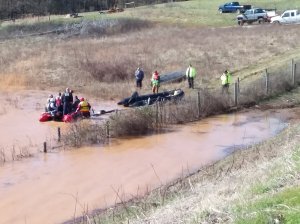 In the Cleveland incident, one person on the boat called 911 around 11:55 a.m. By 1 p.m. they were out of the water and safely onto the roadway where an ambulance was waiting. DeGrave said no one was injured.

Members of the Rowan County Rescue Squad and Miller’s Ferry Fire Department provided swift water rescue. The fire department also towed the jon boat to shore. The motorized boat was tied off at the fence.

DeGrave said the water where the boats were stuck was about 6 feet deep. He said Third Creek is usually about eight feet lower than what it was on Friday.

While power outages were relatively limited in the immediate aftermath of the storm, high winds that followed the line of storms Thursday caused more than 2,000 power outages across the county. Many of the outages lasted for hours. Among those outages was the Mid-Carolina Regional Airport, where a worker discovered the power out at 7 a.m. Friday and electricity wasn’t restored until early afternoon.

Miller said the spill was due to inflow of infiltration caused by rain totaling 3.5 inches in less than a 24-hour period. No significant environmental impact to receiving streams were identified.

All told, there were 102 storm-related emergency calls as of late Friday afternoon. Emergency Services Chief Chris Soliz said the southern and central areas of the county had the largest concentration of severe storms.

“There was a lot of water and there were some service calls for rescues and responses from individual fire departments,” Soliz said.

He commended the fire departments for their work at managing the calls as they poured into 911.

“The fire departments did great in managing the calls in the communities they needed to serve,” Soliz said.

The response system also worked well, as those involved used the available resources properly, he said. Emergency crews weren’t overwhelmed by the number of calls that came in, but “it was definitely busy,” Soliz said. 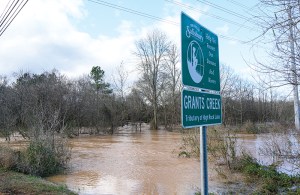 Josh Bergeron / Salisbury Post – Grants Creek overtopped its banks after heavy rain Thursday that continued into Friday. It was one of several swollen creeks and streams.

With water still flowing through creeks and streams as well as across roadways to the Yadkin River, road closures persisted into Friday, and the Rowan-Salisbury School System canceled classes because of lingering storm effects.

Soliz said local law enforcement, fire departments and the N.C. Department of Transportation worked well together to get barricades in place to prevent potential injuries. Soliz said flooding from the Yadkin River was not necessarily an area of concern but emergency personnel were monitoring it. The Yadkin River near the Davie-Davidson line crested early Saturday morning at 28.75 feet, just below the major flooding stage, according to a U.S. Geological Survey gauge at the site. The South Yadkin River, which feeds into the Yadkin River, crested Friday at 21.56 feet, roughly one foot shy of its record height, at the site of a river gauge on the Rowan-Davie border.

In one instance, someone tried to get around a barricade on a flooded road and that person had to be helped by the fire department to get out of the car. Other incidents involved residential areas where rain accumulated and people needed help getting out.

No significant injuries or fatalities were reported, Soliz said.

The National Weather Service spent portions of Friday surveying lingering storm damage from Thursday’s storms and confirmed an EF0 tornado touched down south of Gold Hill. The tornado produced 85 mph winds and is considered the weakest tornado on the scale, said an agency statement issued Friday.

Another tornado, an EF2 with wind speeds of 125 mph, was also confirmed in the Kannapolis area. That tornado began just west of Interstate 85, near Lane Street, snapping and uprooting trees as it crossed the interstate.

It damaged the awning of a service station, moved along Old Salisbury-Old Concord Road and reached Gold Fish Road, where it damaged several homes. The strongest damage associated with the tornado was along Pless Road, and the National Weather Service said the tornado weakened as it moved east.

To receive updates on outages, road closures and other storm-related incidents from public safety agencies visit ReadyRowan.org and to sign-up for alerts about incidents visit rowancountync.gov/rocoalerts.