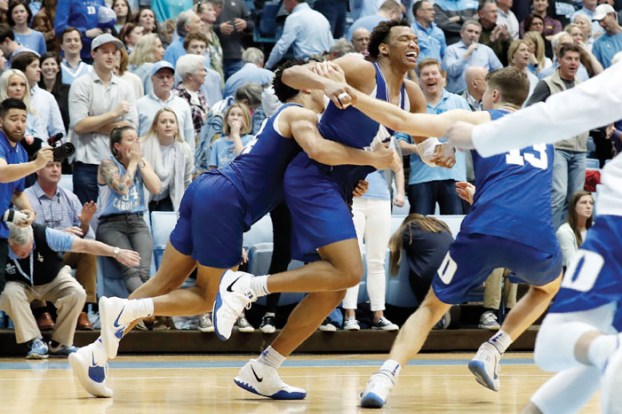 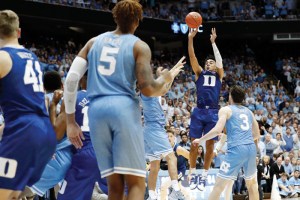 By AARON BEARD AP Basketball Writer
CHAPEL HILL (AP) — Tre Jones got Duke to overtime, and Wendell Moore Jr. finished off North Carolina.
They did it with a pair of plays sure to live on in replays and the lore of the fierce rivalry, too.
Jones hit a jumper at the horn to force the extra period, then Moore scored on a putback of Jones’ air-balled jumper as time expired in OT to help the No. 7 Blue Devils top the Tar Heels 98-96 in a wild renewal of the longtime series Saturday night.
“There’s really nothing to put into words,” Jones said with a laugh. “I’m still trying to wrap my head around what happened.”
So was everyone else in the Smith Center.
“What happened in the game, it’s just unreal,” UNC freshman Cole Anthony said.
Duke (20-3, 10-2 Atlantic Coast Conference) rallied from 13 down in the final 4 1/2 minutes of regulation on Jones’ contested shot after he ran down a long rebound on his own intentionally missed free throw. Then the Blue Devils had to rally from five down in the final 20.9 seconds after the Tar Heels had seemingly steadied themselves after looking staggered following Jones’ jumper.
Jones hit a free throw to tie it with 6.6 seconds left in OT only to miss the second, but Moore tapped the rebound beyond the 3-point arc to be recovered by teammate Jordan Goldwire. Jones got the ball and drove to launch an off-balance shot off one foot and missed everything, but Moore flew in behind Christian Keeling to snatch the ball near the left side of the rim and put it right back in.
Two clutch baskets, right at the horn. It was reminiscent of Austin Rivers’ buzzer-beating 3-pointer to win here in 2012, right down to Duke players spilling onto the court from the bench to mob Moore and celebrate in front of a stunned UNC crowd.
“”If you don’t care who won the game, you had to enjoy that as a big-time college basketball game,” UNC coach Roy Williams said. “I care who won the game, so I did not enjoy the final outcome.”
Jones had 28 points for Duke, which trailed most of the night and led for only 1:47 of game action. The Blue Devils scored nine straight points in the final 50 seconds of regulation, and then the first six points of overtime.
“We’ve put so much time and effort in and we all have the same mentality at that point,” Jones said, “that we weren’t losing, that we were going to win this game.”
Anthony had 24 points and 11 rebounds for the Tar Heels (10-13, 3-9), who were unexpectedly in control of this one much of the way — only to be undone by missed free throws and an inability to come up with one or two more clutch plays to close it out.
BIG PICTURE
Duke: Jones offered a reminder of how good he can be in big moments. After big man Vernon Carey Jr. fouled out, the Blue Devils had to go small with Jones running the point with confident and aggressive precision. “He was at another level tonight,” Duke coach Mike Krzyzewski said, adding: “He was a stud tonight, man.”
UNC: For once, the Tar Heels’ season-long struggles seemed in the past, and they had found probably their best mix of Anthony’s ball-dominant style with getting the ball consistently in the post even while playing without No. 3 scorer Brandon Robinson due to an ankle injury. And yet, the Tar Heels — just as in their first-ever home loss to Clemson last month — faltered at the most critical moments. Most glaringly, they made just 21 of 38 free throws, including 5 of 12 to end regulation.
STAYING CLOSE
This one was fittingly close considering the history of the rivalry.
The teams were marking the 100th anniversary of the first basketball game between the teams with retro-inspired jerseys that had each team sporting their shade of blue. And in an odd stat, the teams had split the past 100 games evenly, even matching one another with 7,746 points in those meetings.
And now, Duke’s ahead by a bucket.
DISPUTED PLAY
A disputed no-call in the final seconds of overtime gave Duke the ball and its chance to win. After a driving basket by Moore got the Blue Devils within one with 12 seconds left, the Tar Heels tried to inbound the ball to Andrew Platek — only to see Moore make contact with Platek while knocking the ball away near the sideline. Officials didn’t call a foul and ruled the ball touched Platek last, and then upheld the call after a replay review with 10.7 seconds left.
TIP-INS
Moore had 17 points and 10 rebounds for Duke. … Carey had 18 points in a dominating first half but didn’t score after halftime. … The Blue Devils scored 25 points off 18 turnovers. … The Tar Heels shot 52% and had five players in double figures, including Garrison Brooks (18) and graduate transfer Christian Keeling (13). … Duke earned its first win in Chapel Hill since 2016.
UP NEXT
Duke: The Blue Devils host No. 8 Florida State on Monday night.
UNC: The Tar Heels visit Wake Forest on Tuesday night.
___
More AP college basketball: http://apnews.com/Collegebasketball and http://www.twitter.com/AP_Top25
___
Follow Aaron Beard on Twitter at http://www.twitter.com/aaronbeardap

Davidson column: Emotions of sports; and the return of the XFL

By Dennis Davidson dennis.davidson@salisburypost.com A lot of people have asked, “Did you cry?” Of course, they were referring to last... read more